The HCT in Ladakh, the GMRT in Pune and the AstroSat, India's first dedicated space observatory launched by ISRO two years ago all played a role. The debris field resulting from the collision of the two neutron stars. Image: NRAO.

Over 70 ground and space-based observatories interrupted their planned campaigns to probe the collision. Dozens of these astronomical instruments belonged to NASA alone. The Very Large Array in the United States, NASA's Fermi gamma-ray telescope, the Hubble space telescope, the Spitzer telescope in an Earth-trailing orbit all participated in the observation campaign of the single event. The dark energy camera at the Cerro Tololo Inter-American Observatory, the Megellan telescopes, the Gemini South telescope and the SOAR telescope, all in Chile observed the event.

According to Professor A Gopakumar from the Tata Institute of Fundamental Research, a gravitational-wave astrophysicist who has worked with the LIGO-Virgo collaboration, this is the most intensely observed astronomical event in the history of the human civilisation. "I know that is a tall claim. I say that because this event was followed by close to 3,000 professional observers, and not just by gravitational wave scientists," Gopakumar says.

Astronomical assets of India too contributed to the observation campaign and increased the scientific understanding of the event. The Himalayan Chandra Telescope at Hanle, Ladakh, the Giant Metrewave Radio Telescope (GMRT) in Pune and the AstroSat, India's first dedicated space observatory launched by ISRO in late 2015 all played a role.

The Himalayan Chandra Telescope is located near Mt Saraswati in Hanle, Ladakh, and is at an altitude of 4,500 meters or 15,000 feet above sea level. The telescope is operated remotely by the Indian Institute of Astrophysics, located about thirty-five kilometers to the northeast of Bengaluru, using a dedicated satellite link. The telescope is available to the astronomical community, and proposals are invited three times a year. The IceCube Neutrino Observatory in Antartica, which participated in the rapid response observations of neutrinos after the initial detection by LIGO, observed some neutrinos originating from the same region in the sky. The Himalayan Chandra Telescope was instrumental in ruling out any connection between the event detected by LIGO, and the neutrino observations by the IceCube observatory. The Giant Metrewave Radio Telescope (GMRT) located in Khodad on the Pune-Nasik highway is operated by the Giant Metrewave Radio Telescope (GMRT) and is one of the largest interferometric array in the world. The array is made up of thirty steerable radio telescopes, that are lightweight because of the use of innovative stainless steel wire ropes instead of the conventional backup structure. The GMRT, along with NASA's Hubble Space Telescope and the Chandra X-ray observatory, detected a natural particle accelerator in space in early 2017. Late last year the GMRT was the last astronomical instrument to track the European Space Agency's (ESA) Schiaparelli lander that crashed into the Martian surface. 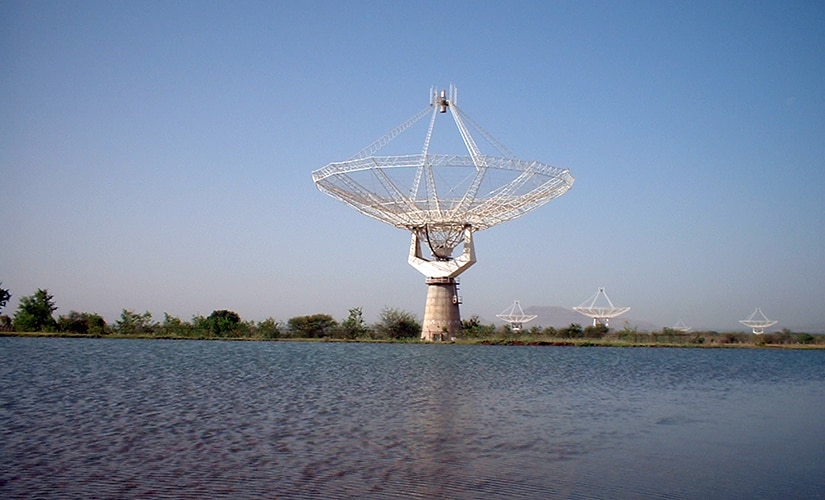 The GMRT near Pune. Image: GMRT.

The neutron stars involved in the collision emitted jets of material that were detected by the Chandra X-ray telescope, which was scanning the skies for an X-ray source which are associated with gamma-ray bursts. Surprisingly, the X-rays were detected nine days after the initial detection of the gravitational waves. This delay is explained by the theory that the jets were not initially pointed towards the Earth and were detected as their cone of propagation overlapped with the Earth. The GMRT also found that the jets were weaker than normal, indicating that the material in the jets had a wider spread than usual.

The GMRT is undergoing upgrades to the existing electronics and systems, which will give it unmatched capabilities till the Square Kilometre Array (SKA) becomes operational by 2023.

The AstroSat mission celebrated its second anniversary in the last week of September this year. The AstroSat was launched on board the PSLV-C30 mission with six co-passenger satellites in September 2018. The AstroSat is the first dedicated space observatory by India, and has four X-ray payloads, one ultraviolet telescope and a charge particle monitor. In July this year, the AstroSat observed a massive coronal explosion on Proxima Centauri, the nearest star known to host planets. The giant coronal flare-up could not have been very good news for any inhabitants who may have been living on the planets in orbit around Proxima Centauri. The event was also witnessed by the Chandra X-ray telescope and the Hubble Space Telescope. The AstroSat undergoing a pre launch test in a clean room. Image: ISRO.

The AstroSat was unable to directly pinpoint the source of the short gamma-ray burst as the Earth itself came in the way. Dr Dipankar Bhattacharya of IUCAA, Pune, an institution that is part of the LIGO collaboration says, "AstroSAT was occulted by Earth and hence could not pinpoint the gamma-ray burst, but Indian telescopic assets like Himalayan Chandra Telescope and GMRT Pune played a significant role in the discovery."

However, the AstroSat mission contributed to science by not observing the event. The Virgo detector also did not observe the gravitational waves emanating from the neutron star collision. Researchers were able to figure out that both the Virgo detector and the AstroSat were located in the blind spots with respect to the source of the gravitational waves. This informed the probable location of the source to astronomers, who were able to pinpoint the source.

Hingoli in Maharashtra has been chosen as the location for a third LIGO detector, known as the INDIGO. It will be the third LIGO facility in the world, and the only one so far to be located outside the United States. The project is expected to cost between Rs 1200-1300 crore, and will allow India to play an important role in the exciting new field of gravitational wave astronomy.