The future of soft robots depend on materials that conduct electricity, sense damage, self-heal

The concept of embodied intelligence describes a system of materials that are interconnected, like tendons in the knee.

Robots used to be restricted to heavy lifting or fine detail work in factories. Now Boston Dynamics’ nimble four-legged robot, Spot, is available for companies to lease to carry out various real-world jobs, a sign of just how common interactions between humans and machines have become in recent years.

And while Spot is versatile and robust, it’s what society thinks of as a traditional robot, a mix of metal and hard plastic. Many researchers are convinced that soft robots capable of safe physical interaction with people – for example, providing in-home assistance by gripping and moving objects – will join hard robots to populate the future. 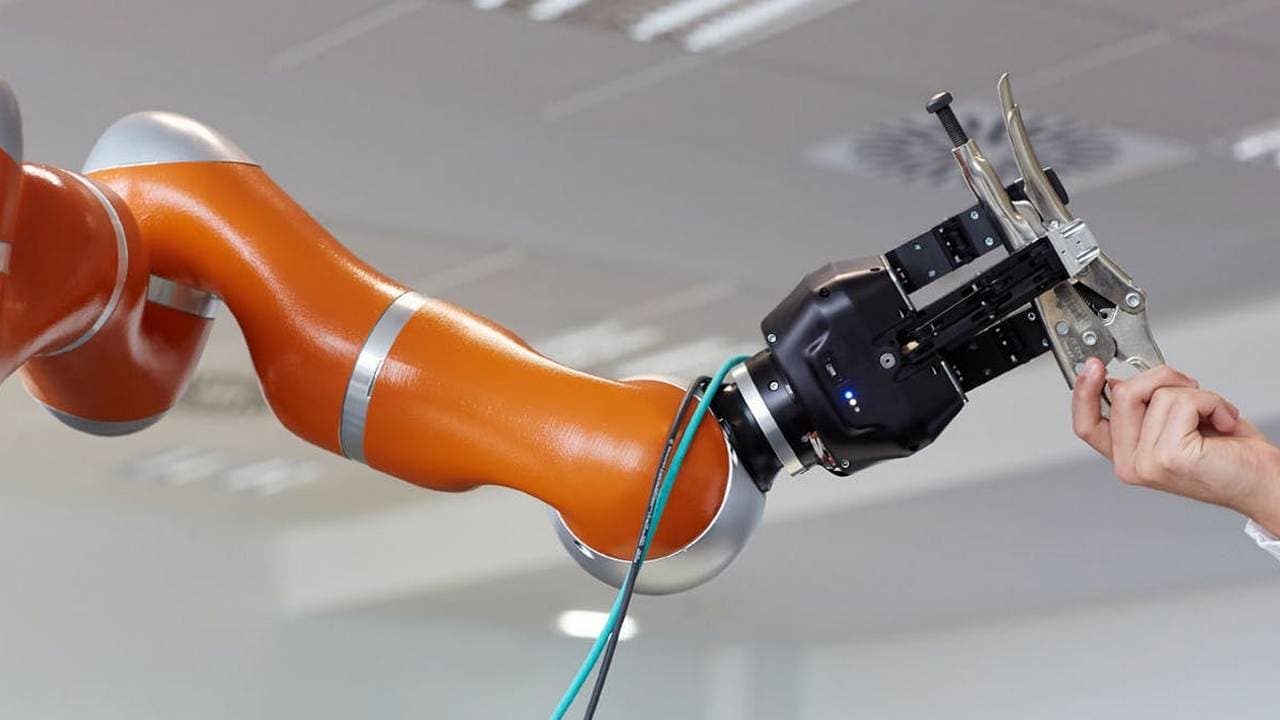 Soft robotics and wearable computers, both technologies that are safe for human interaction, will demand new types of materials that are soft and stretchable and perform a wide variety of functions. My colleagues and I at the Soft Machines Lab at Carnegie Mellon University develop these multifunctional materials. Along with collaborators, we’ve recently developed one such material that uniquely combines the properties of metals, soft rubbers and shape memory materials.

These soft multifunctional materials, as we call them, conduct electricity, detect damage and heal themselves. They also can sense touch and change their shape and stiffness in response to electrical stimulation, like an artificial muscle. In many ways, it’s what the pioneering researchers Kaushik Bhattacharya and Richard James described: “the material is the machine.” 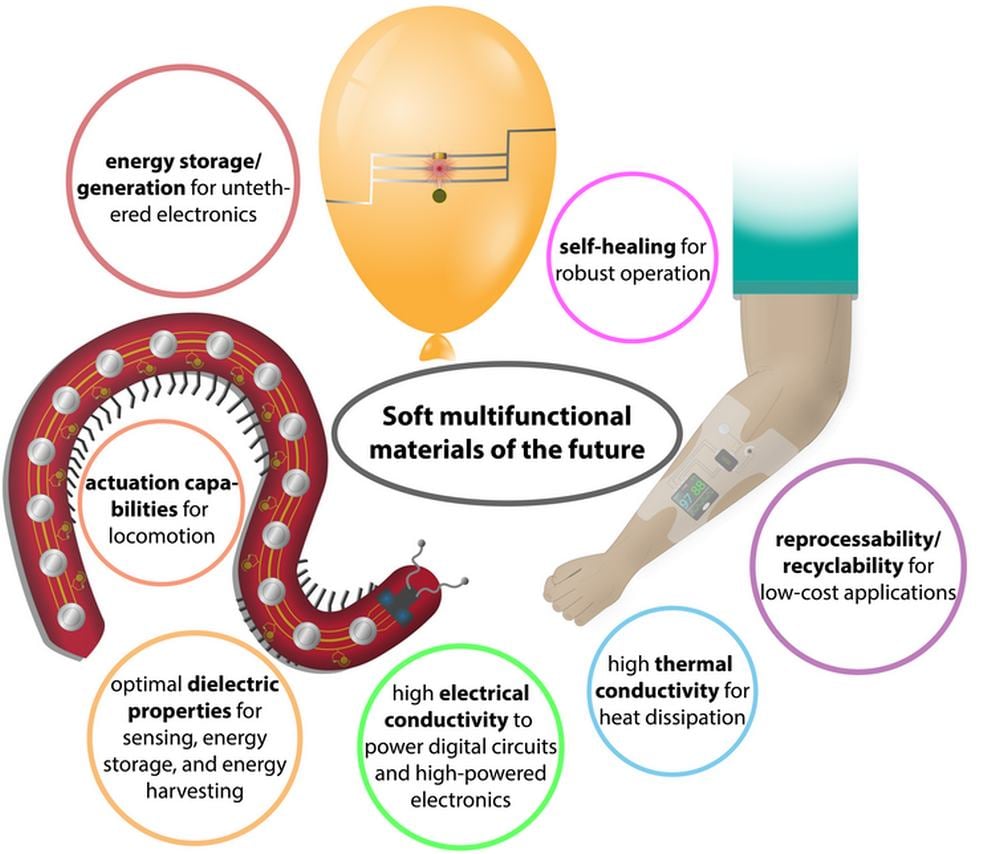 Soft multifunctional materials will be used in soft robotics and wearable computers, for example, and will perform many different tasks simultaneously. Image credit: Michael Ford

This idea that the material is the machine can be captured in the concept of embodied intelligence. This term is usually used to describe a system of materials that are interconnected, like tendons in the knee. When running, tendons can stretch and relax to adapt each time the foot strikes the ground, without the need for any neural control.

It’s also possible to think of embodied intelligence in a single material – one that can sense, process and respond to its environment without embedded electronic devices like sensors and processing units.

A simple example is rubber. At the molecular level, rubber contains strings of molecules that are coiled up and linked together. Stretching or compressing rubber moves and uncoils the strings, but their links force the rubber to bounce back to its original position without permanently deforming. The ability for rubber to “know” its original shape is contained within the material structure.

A soft robot with a stretchable and electrically conductive circuit that is self-healing. Image credit: Soft Machines Lab

Since engineered materials of the future that are suitable for human-machine interaction will require multifunctionality, researchers have tried to build new levels of embodied intelligence – beyond just stretching – into materials like rubber. Recently, my coworkers created self-healing circuits embedded in rubber.

However, if the metal-embedded rubber is subjected to enough force, the droplets will rupture and coalesce to form electrically conductive pathways. Any electrical lines printed in that rubber become self-healing. In a separate study, they showed that the mechanism for self-healing could also be used to detect damage. New electrical lines form in the areas that are damaged. If an electrical signal gets through, that indicates the damage. Liquid crystal elastomers are a type of shape memory material that can be programmed into a specific shape, like this 3-D face, and then reversibly transform into another shape, such as a flat sheet. Image credit: Jeff Fitlow/Rice University,

The combination of liquid metal and rubber gave the material a new route to sense and process its environment – that is, a new form of embodied intelligence. The rearrangement of the liquid metal allows the material to “know” when damage has occurred because of an electrical response.

Shape memory is another example of embodied intelligence in materials. It means materials can reversibly change to a prescribed form. Shape memory materials are good candidates for linear motion in soft robotics, able to move back and forth like your bicep muscle. But they also offer unique and complex shape-changing capabilities.

For example, two groups of materials scientists recently demonstrated how a class of materials could reversibly transform from a flat rubber-like sheet into a 3-D topographical map of a face. It’s a feat that would be difficult with traditional motors and gears, but it’s simple for this class of materials due to the material’s embodied intelligence. The researchers used a class of materials known as liquid crystal elastomers, which are sometimes described as artificial muscles because they can extend and contract with the application of a stimulus like heat, light, or electricity.

Putting it all together

By drawing inspiration from the liquid metal composite and the shape-morphing material, my colleagues and I recently created a soft composite with unprecedented multifunctionality.

It is soft and stretchable, and it can conduct heat and electricity. It can actively change its shape, unlike regular rubber. Since our composite easily conducts electricity, the shape-morphing can be activated electrically. Since it is soft and deformable, it is also resilient to significant damage. Because it can conduct electricity, the composite can interface with traditional electronics and dynamically respond to touch.

Furthermore, our composite can heal itself and detect damage in a whole new way. Damage creates new electrically conductive lines that activate shape-morphing in the material. The composite responds by spontaneously contracting when punctured.

In the movie “Terminator 2: Judgment Day,” the shape-shifting android T-1000 can liquify; can change shape, color, and texture; is immune to mechanical damage; and displays superhuman strength. Such a complex robot requires complex multifunctional materials. Now, materials that can sense, process and respond to their environment like these shape-morphing composites are starting to become a reality.

But unlike T-1000 these new materials aren’t a force for evil – they’re paving the way for soft assistive devices like prosthetics, companion robots, remote exploration technologies, antennas that can change shape and plenty more applications that engineers haven’t even dreamed up yet.