The asteroid is extremely elongated, and is about 400 meters long and about 40 meters wide.

Astronomers are rushing to observe an object hurtling away from the solar system at a blistering speed of 38.3 kilometers per second. NASA's space telescope, including the Hubble and Spitzer are observing the object. It is travelling towards the constellation of Pegasus, and humans are never likely to encounter the mysterious asteroid again. 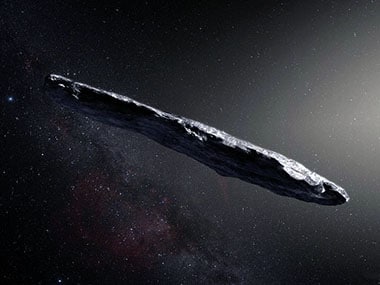 The object was first detected by the Panoramic Survey Telescope and Rapid Response System (Pan-STARRS) 1 Telescope in Hawaii on 19 October. The official designation of the object is 1I/2017 U1, but the Pan-STARRS team has dubbed it Oumuamua, which is Hawaiian for "first messenger from far away".

The asteroid is extremely elongated, and is about 400 meters long and about 40 meters wide. There are no similarly shaped asteroids in our own solar system, and scientists are puzzled about how Oumuamua got its shape. While the object appears to come from the direction of the constellation of Lyra, close to the point where the star Vega shines in the sky, the star was in a different position in the sky 300,000 years ago, when the asteroid was near the current position of the star.

Oumuamua could have been wandering through the cosmos for millions, or even billions of years. It has a reddish hue, which indicates that it has been basking in the radiation of cosmic rays for hundreds of millions of years.

On 9 September, the interstellar visitor traced a path around the Sun, at a blistering 87.3 kilometers per second. The object was moving too fast to be captured by the gravity of the Sun, and so slingshotted around it. The object is now moving towards the constellation of Pegasus, and will move beyond the orbit of Jupiter in 2018, and beyond the orbit of Saturn in 2019. The path of the object on its outward journey is about 20 degrees above the plane of the planets.

Interstellar asteroids and comets have been theorised to exist, but this is the first time that such an object has been directly observed. The International Astronomical Union had to come up with a temporary nomenclature convention for the new class of objects. The asteroid spins around its axis every 7.3 hours, as a result of which its brightness varies greatly. The observations suggest that Oumuamua is made up of dense rock and metal, with no water or ice on the surface. There is no dust around the asteroid.

Paul Chodas, manager of the Center for Near-Earth Object Studies at NASA's Jet Propulsion Laboratory (JPL), says, "What a fascinating discovery this is! It’s a strange visitor from a faraway star system, shaped like nothing we’ve ever seen in our own solar system neighborhood."

The object bears some similarity to a spacecraft from interstellar space in Arthur C Clarke's Rendezvous with Rama. The elongated, cylindrical object was travelling rapidly through space, spinning on its axis all the while. The structure was hollow on the inside, and a type of spaceship known as the O'Neill cylinder. In the book, two other interstellar spacecraft were expected to visit after the first one passed through the solar system.