A new report suggests that Facebook’s Watch streaming service will arrive in India next year. 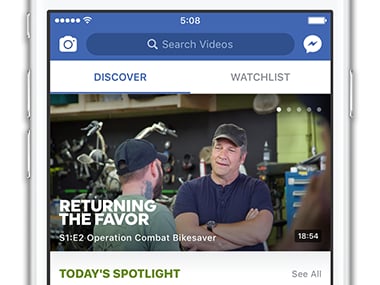 Watch is a video platform that offers up videos in an episodic format and should be available on all of the most popular platforms around, including as a TV app. Facebook says that the format is designed to “help you discover” new shows based on what you and your friends are currently watching.

Unlike the TV shows that you’d find on a platform like Netflix, Watch appears to be more like a YouTube channel, but on Facebook, and with more options for engaging with the audience. Live events can also be streamed.

The Ken, which broke the story, claims to have sources who confirm the January to March 2018 release date.

The Next Web notes that the platform has a good chance to succeed in India and cites India’s massive Facebook audience and the large, English-speaking audience in the country.

Unlike YouTube, recommendations that show up in your Watch tab will largely be determined by what your friends are watching and what’s popular around you, leading to a more social experience.

Watch was launched in the US in August this year.