The courses have been designed with Goldsmiths college under the university of London, and no prior experience is necessary.

In November, US based edutech company Coursera launched its first ever series of courses on Virtual Reality (VR) technologies. The courses have been designed with Goldsmiths college under the university of London, and no prior experience is necessary. The five courses get increasingly complex, and cover an introduction, creating 3D assets for VR, 3D interaction design, creating social VR apps and interactive characters, and finally ends with making a VR game using the Unity game engine. 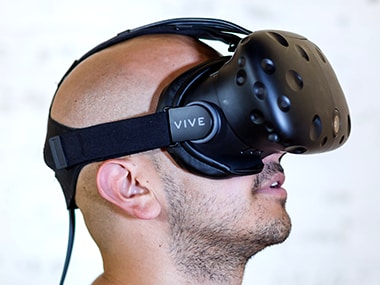 We had an opportunity to interact with Dr Marco Gillies and Dr Sylvia Pan, professors at Goldsmith College, University of London, who are working with Coursera to offer the VR courses. Together, the two professors have more than 25 years of experience in cutting edge VR laboratories around the world. VR technologies goes beyond just game design, and one of the first questions we had was why the time was right for a VR course, and what are the possibilities of the field.

Dr Pan said, "We are passionate about VR and what it can do for us. We have these the questions about its capabilities from everybody- professors, doctors, mechanics, IT, and many others. That made us think that we should have a general course about VR on Coursera. Not really specific about any particular industry but the one that can provide overall picture as well as its applications. That is why we decided to do this."

Dr Gillies responded, "University of London has had a good relationship with Coursera, which I hope will continue for a long time. We learnt that there could be a large base of learners in India who are willing to advance their skills in virtual reality and this is the best time to do it."

The concept of VR has been around from a long time, and only now have consumer VR technologies making their way to the market. The adoption is still not widespread, and there are a whole bunch of factors stopping more widespread adoption of VR, including the cost of the technology and the dearth of content. One of the questions we had was why the adoption of VR is slow, and when will the technology finally "click".

Dr Gillies responded, "I do not think it is slow. I think it is going at a pace you would expect any new technology to grow. I think, just as you said, it is changing everything. Actually I believe that it is going to bring a big fundamental change but that does not happen in a couple of months. VR is a lean medium. It is not like Blue Ray DVD. You have to target it correctly by creating relevant content and then implement it. You have to understand how it works and suits a particular medium. You have to develop a language and grammar of VR. It is certainly true that the grammar did not emerge or grow rapidly ever since VR was conceptualized 30 years ago. I do not think it is going to take that much time any longer. But it is little hard. A lot of things have to happen. We need new content that will define this medium."

Dr Pan added, "Exactly. For me, it has been so. We have been in India since the last few years. The growth and implementation has been tremendous. I already feel like I am far behind the trend. You have so many channels now. You can go to YouTube, use VR, and many have started using it. It is the new medium. We need a new language. It is going to take few years for things to really explode. Everybody has access to mobile phones. We have the 360-degree VR. But we need to pay a lot of cost for devices. It is somewhere between $1000 - $1500. I am not creating my stuff yet because I know that things are going to change. I am waiting for the right moment to buy the hardware. So, a lot of things are happening. We are definitely on a very good curve to go up but we are not doing everything in VR yet because everything else will take time. " The cost was one of the major hurdles identified, but Dr Gillies pointed out that low cost VR was on its way, it was just a matter time considering the processing power needed and the specialised hardware. "And as she said, it is expensive. I think that low cost VR is the key. You really need the high end hardware to have superior experience. That will cost. It is going to come down like any other technology. It is very graphic intensive. That is why it needs more time to become affordable. You need very specialized hardware."

Another question we had was how different creating content for VR was from creating content for video platforms. Dr Pan explained that the rules of cinematography have to be rewritten for VR, as the traditional rules of framing and camera movement on film do not apply to VR content, "We can understand this with computer games which are closer to VR experience because it is interactive. Whatever you do with your control happens on the screen. For conventional videos, the camera angle assumes the line of view to be in a specific direction. In VR, the director can get the camera to speak their language. They do not have to make the user look at where they need to. The user can look at where they feel like. It also opens up opportunities for many other new types of creativity. But all of this will take time. "

Dr Gillies pointed out that it was an emerging field, and that there was a lack of standards in the early days, "We are looking at new kind of interfaces where the user does not have to be behind the screen. With VR, you are in there. You are not looking at the things from outside but become a part of it. That is a very powerful experience. But again, it is not something that people are habitual to deal with. I find it quite weird. You use this headgear and you are in the house. In a conventional film, you will not be in the house but would look at it from the outside. But we wanted to get on with this course early. We believed that this was the best timing to start it. If we had waited for everything else to settle before we start, we would not have that opportunity to teach it yet. Our lives would have been so much easier with standards around it."

Unity is a great platform to make VR content, and we saw some interesting XR applications made using Unity at the first ever Unite India conference in Hyderabad. These included an app that pops up engineering drawings, a dogfighting game with airplanes, and a simulation for the Indian army that allows forces to get a realistic picture about a new area before operations. The Unity VR Game course walks users through all aspects of game creation, including storyboarding, prototyping, testing and implementation. The VR courses are available on the Coursera website, as well as the Android and iOS apps.

EdTech: A force for good and defining role it has in inspiring a whole new generation