The Amazon 'Great Indian Festival' sale to begin at midnight on 21 September, Prime users to get access 12 hours early

According to Amazon there are about 160 million products to choose from, which is an increase of up to 40 percent from the last festive season.

Amazon's 'Great Indian Festive' sale is set to begin from 12.00 am on 21 September till 11.59 pm on 24 September. Amazon Prime members however, will get an early start from 12.00 pm onwards from 20 September. There are great deals on several electronics and additionally HDFC card holders can avail 10 percent cashback on certain products. Also HDFC users have the freedom of paying their EMI's from next year January onwards. 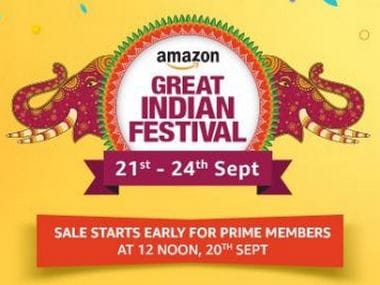 According to Amazon, there are about 160 million products to choose from, which is an increase of up to 40 percent from the last festive season. Amazon is offering up to 20 percent off on laptops during the sale and also Rs 20,000 cashback on exchange of selected gaming laptops. TV sets from BPL, Panasonic, LG and more will getting up to 40 percent off and prime members can avail a buy one, get one free on the purchase of  TCL 65 inches 4K UHD LED Smart TV and getting a TCL 32 inches TV free.

Home appliances such as refrigerators and air conditioners will also see big discounts of up to Rs 10,000. Multiple exchange offers will also be active at the time. There will be offers on Kindle ebook readers and Amazon FireTV sticks.