Day 2 featured discussions on authenticity and the importance of finding oneself, and of course, a music fest.

Day 2 of Tech2 Innovate drew fans from the far corners of India. And why not? With the likes of *takes deep breath* Carryminati, Tanmay Bhat, MissMalini, Mark Jacobson, Ted The Stoner, Faisu, Suchita Salwan and Chef Abhishek Gupta *phew* making an appearance, not to mention a late evening music session led by Playing For Change, Ritviz, and Rajakumari, what else would one expect? If perchance you couldn’t attend the youth/culture fest that is Tech2 Innovate, here’s what you missed...

Mark Johnson is a fascinating man with a vision to unite the world through music. Johnson and his team flits from country to country hunting for musicians with soul. In his energetic and rousing keynote, Johnson spoke about his mission, his love for his work, and how technology has helped bring his dream to life. He also spoke about Corning’s shared belief in his vision and how the maker of some of the strongest glass on the planet wants to help him along on his journey.

A sprinkling of music, courtesy of Johnson’s Playing For Change, a band comprising artists from all over the world, brought this session to a close.

“Carry! Carry! Carry… ” was all anyone could hear as beloved PUBG streamer CarryMinati a.k.a. Ajey Negar leapt onto the stage to greet his fans. Carry was joined by comedian turned streamer Tanmay Bhat for a two-hour session of gaming, riveting commentary, and a heart-to-heart with their fans. In conversation with Network 18’s Ragini Verma, Carry and Bhat opened up about their lives, the ups and downs that made them who they are, and the freedom that comes with just being yourself and doing what you love. They discussed the camaraderie born of gaming as a team, how gaming gave them purpose, and why depression is a phase that only helps one grow stronger. Both Bhat and Carry have suffered from depression in the past, and they say it was gaming and the support from their community that helped them get through that phase of their lives. 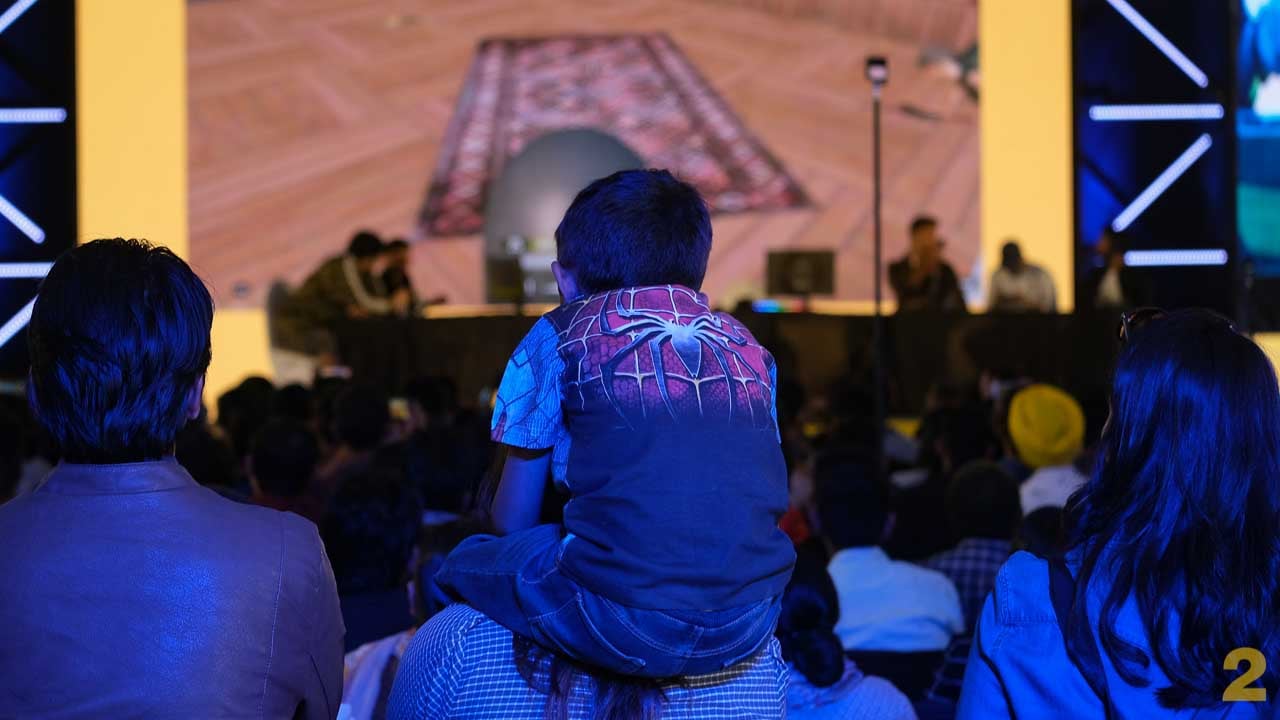 There was no way this young feller was going to miss out on that PUBG action. Image: Anirudh Regidi/Tech2

Their advice to wannabe streamers and gamers? Nobody watches games, they watch streamers. Be yourself. Have fun. But more importantly, stay healthy. Gamers in particular tend to get lost in their games, neglecting their health.

Faisu a.k.a. Faisal Shaikh: Hard work and consistency are the keys to success

23-year old Faisal Shaikh boasts of over 10 million followers on Instagram, several million more on TikTok, more engagement than Salman Khan, and a body to match. While he might leave men and women alike swooning in his presence, Shaikh a.k.a. Faisu is a man who comes across as extremely humble. For the audience, some of whom travelled from hundreds of kilometres away to be in his presence and to get a chance to interact with him, the trip was clearly worth it. Fans brought with them custom artwork, messages of love, and requests for shirtless selfies.

In conversation with CNBC-TV18’s managing editor Shereen Bhan, and Qyuki’s Samir Bangara, Faisu gave the audience a glimpse into his life as a fashion influencer, and fun as it is, the hard work that goes into maintaining that life. 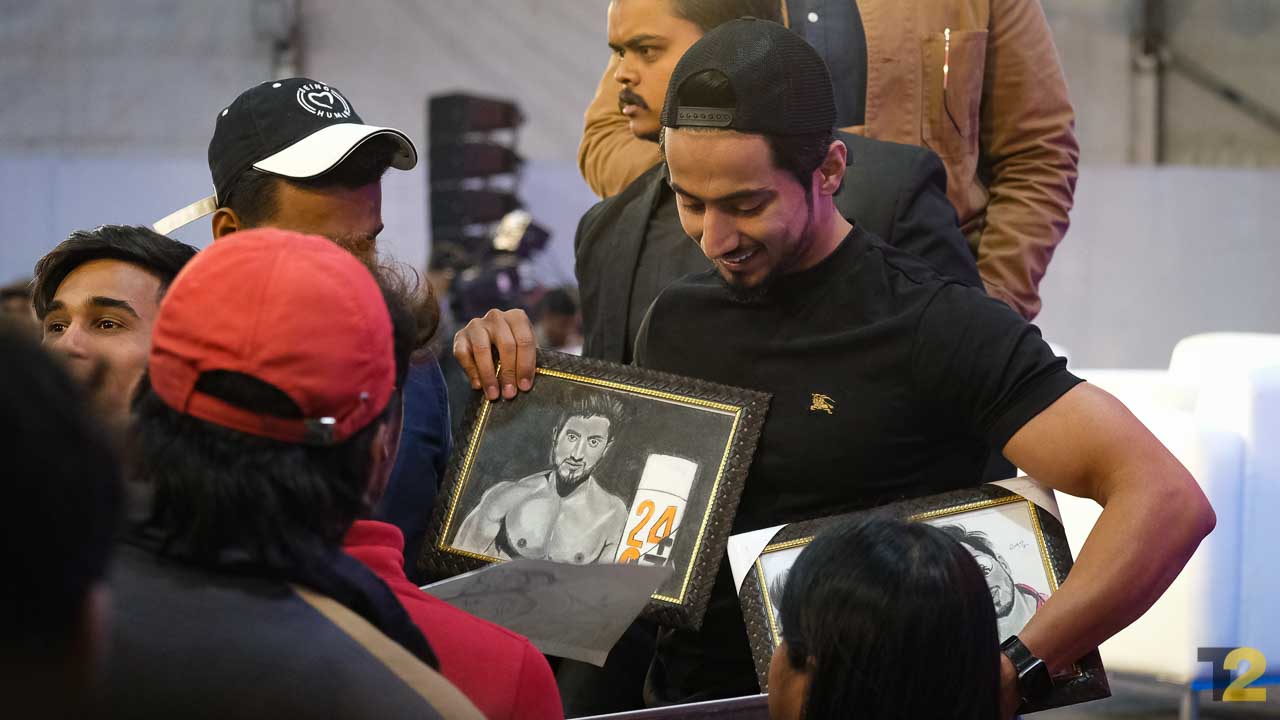 Agarwal explained why screen addiction isn’t an absolute but a subjective and relative issue. A social media influencer or YouTube content creator is bound to spend the majority of their day around screens, what matters is how you use your screen time for something you perceive “worthwhile”, rather than being excessively dependant on screens themselves.

Finding a balance between real life is and your digital life is also irrelevant, according to her, since your online persona as an influencer or aspiring influencer is a curation of aspects of your life that you choose to share with the world.

That said, screen addiction is in some ways like any other addiction, according to Dr Sabarwal. Especially when you’re younger and impressionable, screens can expose you to content (particularly social media), which stimulates a pleasure pathway in your head and affects your self-image and self-esteem.

Jitendra Sharma, a finance person by day and memer by night, revealed his face for the first time at Tech2 Innovate. Speaking of revelations, Ted The Stoner is so much more than just the admin of a successful meme page, he is involved in dog rescues, organises blood donation drives, petitions for climate emergency in India, encourages people to talk about mental health, and most importantly, he gives back to the trolls as good as he gets. We can finally put a face to one of the fabled memelord of the interwebs. Ted The Stoner finally reveals his face. Image: Anirudh Regidi/Tech2

He does not like being called an influencer, but Ted (he sometimes refers to himself with this username) has created an online community that enjoys his memes but also shares the same core values as him. The name Tedthestoner was also a random choice that was not inspired by the movies that came out much after he made his facebook page. And while his username might suggest otherwise, Sharma is also a complete teetotaler with big plans of turning his one million strong online community into a company that works for social causes that are close to his heart.

Psst… he also mentioned that plans for merch are in the pipeline.

Stories and lessons from the popular local tourism and discovery portal LBB were shared by founder Suchita Salwan. The discussion was aimed at exploring how to build a local business aimed at millennials. Salwan drew on her own experience in building LBB and highlighted the need for envisioning the size of your business, what your novel idea really is, and the importance of questioning the usefulness and value of your idea to your target audience. She also spoke on the importance of coming up with an idea that could stand the test of time.

Z-bat: Finding the right bat is a science One of the popular experience zones at Innovate was the cricket net, where true to India itself, many in the crowd indulged in their love for cricket with a bat in hand – specifically, a Z-bat. Z-bat is a startup that is hoping to promote the underrepresented field of sports science in India, which hasn’t made the quantum leaps in research that cricket itself has. Z-bat is India’s first sports tech company to present uni-gender, bespoke cricket Z-Bats. The team behind the bats, through an online to offline approach, and a dedicated sensor, are helping aspiring batspeople in India find the right bat via specialized Z Bat Clinics – which have so far popped up in Mumbai and Bangalore. The clinics use a combination of scientific algorithm and sensor-based technology to help batters find the perfect bat. Many participants and attendees at Innovate including Gaurav Taneja, a.k.a. The Flying Beast, and actor-influencer Varun Pruthi gave the Z-bat nets a whirl at Innovate.

Well, that's about it for Day 2 of Tech2 Innovate. To those who came, thank you for joining us at what we hope will be India's premiere youth and culture festival. To those who couldn't make it, there's always next year!