The Tata Tigor Buzz is priced at Rs 5.68 lakhs for the petrol version and Rs 6.57 lakhs for the diesel version, all prices (ex-showroom Delhi).

Tata Motors have launched the limited edition Tigor, called the Tigor Buzz in India. The Tata Tigor Buzz is priced at Rs 5.68 lakhs for the petrol version and Rs 6.57 lakhs for the diesel version, all prices (ex-showroom Delhi). The Tigor Buzz will be offered with a manual transmission and is based on the XT trim. It will be available across all dealerships in India starting 13 June, stated Tata Motors. This limited edition offering commands a premium of Rs 40,000-Rs 50,000 over the standard model. 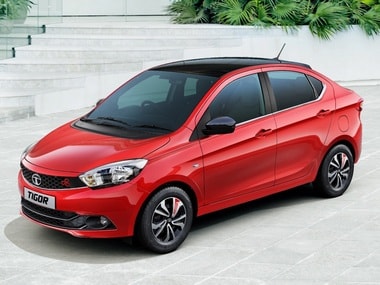 The Tigor Buzz comes with a contrasting black roof, black ORVMs and red accents on the front grille and alloy wheels, along with 'Buzz' badging on the boot lid. The interiors get red accents around the centre console and air-vents, piano black inserts, as well as a new fabric pattern on the seats to liven things up a notch.

Powertrain options remain unchanged from the standard Tigor. This means a 1.2-litre petrol with 85 PS and 114 Nm as well as a 1.05-litre turbocharged diesel with 70 PS and 140 Nm. A 5-speed manual will be the only gearbox option, given that the AMT version is only available on the higher trims. The standard petrol Tigor XM is priced at Rs 5.2 lakh (ex-showroom Delhi) while the diesel comes in at Rs 6.05 lakh. While the Tigor undercuts other sub-four meter sedan rivals like the Maruti Suzuki Dzire and the new Honda Amaze, this segment and the sub-four-metre space, in general, has seen a spate of new launches recently. This launch should keep the Tiago fresh in the minds of buyers and also provide a stylish package at a competitive price.