Amongst OTT (over-the-top) messaging services, WhatsApp has taken some huge leaps in terms of user growth all over the globe.

In a deal that comes nearly a year after its first one with Reliance Communication that launched a WhatsApp plan for its GSM subscribers, WhatsApp has now inked its second telco deal in India -- this time with Tata Docomo.

Subcribers can avail of unlimited WhatsApp services under two packs for 15 and 30 days. The cost for the former will be Rs 15 and the 30-day pack will cost Rs. 30.

Neeraj Arora, Head of Business Development for WhatsApp has revealed that the company now has 30 million monthly active users in India. 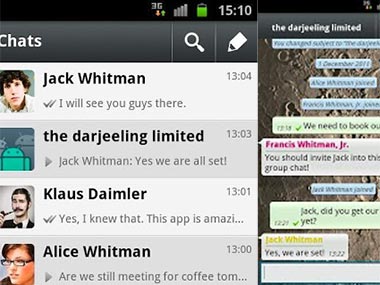 Amongst OTT (over-the-top) messaging services, WhatsApp has taken some huge leaps in terms of user growth all over the globe.

In June, the company revealed to the Wall Street Journal that it attracted more than 250 million active monthly users.

The company also revealed that inbound traffic on the app (messages sent) had doubled every six months up to March 2013 and that on 13 June, they hit a new daily record of 27 billion messages handled in 24 hours.

This is an impressive performance, given the increasingly crowded instant messaging space. In addition to the fact that new players join every day, WhatsApp also has to compete with popular social media platforms like Facebook, and Google's revamped Hangouts.

Research firm Ovum has forecast that by 2016, telecom operators will have lost $54 billion in text messaging revenue because of the increasing popularity of social messaging services (other than SMS, MMS or email) on smartphones. This is more than double the $23 billion they are expected to have lost by end 2012.

According to a Nielsen report earlier this year, WhatsApp was also the most popular smartphone app in India, beating Facebook into second place.