The physicist and ISS astronaut is here to "explore" space technology opportunities between India and his country.

India is a natural ally in the global space exploration programmes with its successful track record of launching a number of satellites and its probe missions to Mars and the Moon, says Swedish astronaut Christer Fuglesang. Fuglesang, who has been to the International Space Station (ISS) twice, says India has a lot to contribute to other nations with the technologies it has refined and thrift it has achieved in the launch of multiple satellites. 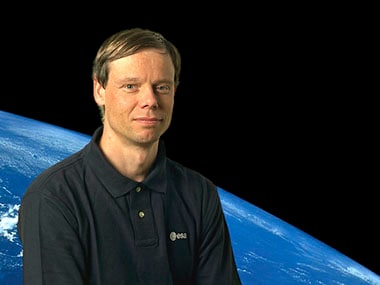 "India is a natural partner. You have a great space programme in India. Your rockets and your satellites are very good... I really hope that India can be brought into this international community to contribute," Fuglesang told IANS in an interview. The physicist, who is here to "explore" space technology opportunities between India and his country, met Indian Space Research Organisation Chairman A.S. Kiran Kumar earlier this week. The visit was a follow-up of the meeting between the two countries' Prime Ministers in Mumbai last year.

Fuglesang said Swedish scientists had in the past also collaborated with their Indian counterparts on the latter's Mars and Moon missions. When India's proposed mission to Venus was mentioned, he said he too was "involved in a project at the KTH Royal Institute of Technology (Stockholm) to develop technology to study the surface of Venus". "Venus is a nasty place, 460 degrees centigrade temperature and 90 atmosphere pressure. You need very good technology to first survive there and that's being developed at KTH," he said, adding in a lighter vein: "We are just looking for a hitchhike."

During one of his spacewalks, Fuglesang and another astronaut, John Olivas, replaced an ammonia tank weighing about 800 kg at the ISS — the largest object ever handled in a spacewalk. The astronaut is proud to term the space station a huge endeavour of bringing peace to the world. "ISS came about at the end of the Cold War when Russia and the US could work together. To bring it about, two space stations (a US and a Russian) were docked together. It has helped stabilise things... Two, three years ago ISS was actually nominated for the Nobel Peace Prize. They have worked very well together. You want to see more partners in future," he said.

Other than the spectacular "green jungles of South America, the blue Atlantic, and red Sahara" which he observed on Earth from space, what the astronaut remembers as most striking from his spaceview of Earth was the absence of borders — a cause of strife historically. "What you never see from up there are borders. Certainly there are borders between countries, but you don't see that... Instead of bothering about fighting, when you are up there you realise what we really need to care about is our planet which is so fragile, especially the atmosphere. You notice how thin the atmosphere is which is our environment for all humanity. We are not doing as good as we have to," he said.

The Earth is not the only thing to marvel out there in space, he says. "The space looks black, extremely. You do see more stars because you are above the atmosphere. They say you see three times more stars; I didn't count; so I don't know. They don't blink because there is no atmosphere. Then, there are other phenomena like auroras. I witnessed auroras (Northern/Southern Lights) during my space walks," Fuglesang said.

He also expressed his doubts about the ambitious human landings on Mars and the Moon — as envisaged by entrepreneur Elon Musk through his SpaceX space exploration company — and termed it impracticable. "He (Musk) has a very good track record to deliver what he says, but never in time. So, he's now saying that he's going to send people to Mars by 2024, I don't think there's any chance to do it by 2024. But if you double the time, then there's a very good chance," he maintained.

Asked if there was any grouse that he nursed during his two outings (taking the space shuttle Discovery in 2006 and 2009, each time for two weeks), he replied: "You miss fresh food... It was nice to get back and have a hamburger."