Super blood wolf moon lunar eclipse 2019: Europe, West Africa to get good view; when and where to watch

An unusual set of celestial circumstances comes together Sunday for skywatchers in Europe, Africa and the Americas, where a total lunar eclipse may be glimpsed, offering a view of a large, red moon.

An unusual set of celestial circumstances comes together Sunday for skywatchers in Europe, Africa and the Americas, where a total lunar eclipse may be glimpsed, offering a view of a large, red moon.

The full moon will appear bigger than normal because it is closer to the Earth — about 222,000 miles (358,000 kilometers) away — which earns it the nickname "super moon."

Other monikers include a "wolf moon," a traditional way of coining an eclipse in the month of January, and a "blood moon" because of its rusty, red color. Hence the name for this year's event: a "super blood wolf moon."

At the peak of the eclipse, and if the night skies are clear of clouds, Venus and Jupiter should be shining brightly in the night sky. 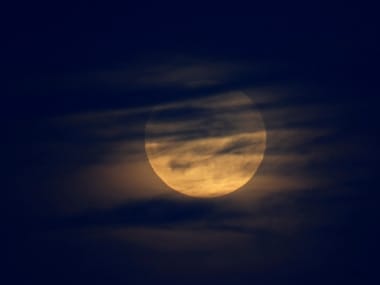 A full moon rises between clouds before the start of a total lunar eclipse that is being called a 'super blood wolf moon', in San Diego, California, US.

- In the United States, the edge of the moon will begin to fall into shadow at about 7:33 pm on the West Coast and 10:33 pm on the East Coast, according to NASA.

- From 0441 to 0543 GMT: for an hour and two minutes, the moon will be entirely in Earth's shadow. But the moon will not be invisible: it will appear tinted in hues of red, orange and pink.

The entire eclipse should be visible in North America, Central America and South America, as well as France, Belgium and Spain.

That is, as long as the view is not obscured by clouds.

If conditions are cloudy where you are, NASA recommends checking out a live stream of the eclipse at timeanddate.com/live

Why red?
During a lunar eclipse, the moon appears red because the light of the Sun no longer directly illuminates it, since Earth is passing in between the moon and sun.

"The color is due to Rayleigh scattering — where the Sun's blue light is scattered off molecules in Earth's atmosphere — which also happens at sunsets," explained the Royal Astronomical Society of Britain.

"The Sun's red light is scattered much less by air, and is bent by Earth's atmosphere in a process called refraction, traveling all the way through it to light up the Moon's surface."

Last eclipse this decade
Total or partial lunar eclipses happen at least twice a year on average, Florent Deleflie, an astronomer at the Observatory of Paris-PSL said. It's just that they are not visible everywhere.

It's a rare event when a total lunar eclipse is visible on so many parts of the Earth's land mass, as is the case Monday.

North Americans may get their next glimpse of a blood moon in 2021 along the West coast and 2022 on the East coast.