SpaceX is expected to launch two prototype satellites, called Microsat-2a and Microsat-2b, as part of its Starlink broadband satellite constellation. 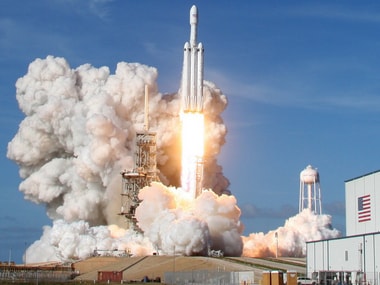 A SpaceX Falcon Heavy rocket lifts off from historic launch pad 39-A at the Kennedy Space Center in Cape Canaveral, Florida, US. Image: Reuters

The Falcon 9's launch is scheduled from Vandenberg Air Force Base in California.

The Falcon 9 rocket will send SpaceX's first Starlink broadband satellites and the Paz radar-imaging satellite for Spain into orbit. The starlink satellite aims to provide low-cost Internet access on a global scale.

SpaceX is expected to launch two prototype satellites, called Microsat-2a and Microsat-2b, as part of its Starlink broadband satellite constellation.

SpaceX has kept mum about many of the details relating to Starlink, but the company's business plan calls for putting thousands of communication satellites in orbit, with limited service starting by 2020, media reported.

The primary payload on Falcon 9 rocket is the 3,000-pound Paz.

According to a report at Nasaspaceflight.com, the Paz satellite - named after the Spanish word for "peace" - will be launched into a 514 km circular orbit.

It was built by Airbus for the Spanish company hisdeSAT and will be used for military and civilian purposes.