SpaceX Dragon docks into the ISS carrying a promise of better fiber optics, space beer and self assembling materials

The important experiments have many applications in space, and promise to help advance multiple fields even on the Earth.

On 16 December, a two-stage Falcon 9 Rocket basted off from Launch Complex 40 at the Cape Canaveral Air Force Station, NASA's rocket launch facility. The rocket was carrying the Dragon resupply craft, with supplies and scientific payloads meant for the International Space Station (ISS). On 17 December, the robotic CanadArm was used to capture the Dragon, and dock the resupply craft with the ISS. 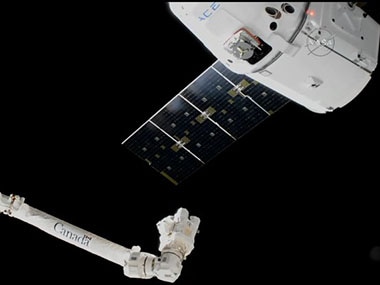 The SpaceX Dragon approaching the Canadarm.

The CRS-13 mission was the thirteenth commercial resupply mission to the ISS by SpaceX. The Dragon will leave the Space Station in January 2018, and return to Earth with about 1630 kg of experiments and supplies. There are four spacecraft currently docked with the space station, the SpaceX Dragon, the Progress 67 and Progress 68 resupply ships, and the Soyuz Ms-06 which ferried three crew members to the ISS on 17 December. Also attached to the space station is the BEAM expandable habitat by Bigelow Aerospace, which entered into an extended testing period.

Fiber optics made in space

ZBLAN is commonly used to make fiber optic glass, but not fiber optic cables. When ZBLAN solidifies on Earth, the atomic structure of the glass leads to the formation of crystals. Scientists believe that when the material is solidified in space, then not as many crystals would be formed. If this is true, then ZBLAN would lead to a higher quality optic cable as compared to the silica-based ones. The payload is a locker-sized unit that requires power and data, but no additional interaction with the crew. The crew will have to transfer and install the locker-sized experiments, as well as remove it for sending the payload back to Earth. The planned duration of the experiment is 20 days.

The @SpaceX #Dragon resupply ship loaded with new science experiments was captured at 5:57am ET as the station orbited above Australia and New Guinea. https://t.co/v8qYkysswI pic.twitter.com/J2tIWAhqxU

The first step for brewing beer on Mars

Anheuser-Busch, a US-based brewing company has taken the initial steps towards its commitment on making Budweiser the first beer to be brewed on Mars. On board the Dragon are 20 barley seeds, that will be in orbit for approximately a month. The seeds are housed within self-contained shoe box sized laboratories, known as Tango CubeLabs. One box will explore barley exposure to a microgravity environment, and the other will conduct experiments related to germination. Once returned to Earth, scientists will study the seeds to understand the effects of a microgravity environment on barley. The spacecraft currently docked at the ISS. Image: NASA.

The seeds will allow researchers to start planning for brewing beer on Mars, but will also help increase the understanding of the growth of barley for agriculturists on Earth. To conduct the experiments, Budweiser is partnering with CASIS, as well as Space Tango, a company that specialises in the development of payloads. The experiments initiate a series of tests to understand how important ingredients for beer behave in a microgravity environment. Ricardo Marques, vice president, Budweiser, said "Budweiser is always pushing the boundaries of innovation and we are inspired by the collective American Dream to get to Mars. We are excited to begin our research to brew beer for the red planet."

Another scientific payload on board is the space debris sensor (SDS). The payload will directly monitor collision events with tiny pieces of space debris over a period of two to three years. Although ground-based telescopes measure space debris, they only track the larger pieces of space junk. The SDS will measure micrometeoroid orbital debris, which is debris in the sub-millimeter scale. The sensor will measure the frequency, energy, timing, size, direction and speeds of micrometeoroid impact events. The site of a micrometeorite impact on one of the windows of the Cupola on the ISS. Image: NASA.

The windows of the Cupola on the ISS, an observation deck that offers a panoramic view of the Earth, has scars due to impact events of this type. The SDS will allow for better estimates of the amount of small-scale debris in space, as well as how they can potentially affect human habitats in space. The sensor consists of two layers of thin films, an acoustic sensor system as well as a resistive grid sensor system. The accurate measurements will allow for better risk assessments, as well as allow NASA to develop suitable technologies to safeguard human life and space hardware. The data collected by the SDS will lead to the design requirements of future shields for spacecraft.

A great view of the Space Debris Sensor (SDS) and Total and Spectral Solar Irradiance Sensor (TSIS-1) in the trunk of the @SpaceX #Dragon, on their way to the @Space_Station. Learn more: https://t.co/gd8TrVLueA pic.twitter.com/86FEC2AhqY — ISS Research (@ISS_Research) December 15, 2017

The primary source of energy for Earth is the Sun. The Earth basks in the warmth and light provided by our host star, and the solar energy drives the seasons, ocean currents and the weather on the planet. The Total and Spectral Solar Irradiance Sensor (TSIS-1) carried to the ISS by the Dragon will allow scientists to get an accurate idea of the total amount of solar irradiance reaching the Earth. The data collected by the sensor will allow researchers to create better climate models, as well as get a deeper understanding of the primary energy supply for the planet.

The energy output from the Sun is not at a constant rate. The Sun goes through eleven-year cycles of reduced and increased solar activity. Each cycle shows a variance in the maximum and minimum solar activity, and the energy output of the Sun changes across the decades and centuries as well. The TSIS-1 will be in a position to accurately take measurements during the next solar minimum. The TSIS-1 will also be able to measure the distribution of the solar energy in the infrared, visible light and ultraviolet portions of the electromagnetic spectrum. The measurements will lead to a better understanding of how solar activity affects the ozone layer, the primary defence the Earth and the life on it have against the energies pouring out of the Sun.

Colloids is a material made up of a solution in which insoluble particles are suspended. Research into these innovative materials will provide insights to the consumer products industries. The specific study on board the ISS will investigate "superballs", spheroid particles that can evolve into cubes, allowing for novel ways of self-organisation. The evolution from cubes to spheres are expected to be thousands of times slower in a microgravity environment as compared to Earth, which will allow for a deeper study of the process.

The phases of the colloids can be controlled by adjusting the ambient temperatures. In space, the colloids could form three dimensional structures that cannot be formed on Earth. The research will help advance the field of chemical energy storage (batteries), photonics and communication. Optical technologies based on colloids could provide workarounds for physical limits in conventional technologies related to heat generation and bandwidth. In space, colloids can be used to create self-replicating and self-healing structures, necessary to reduce maintenance on long-term deep space missions. Apart from the humans on board, the Space Station also houses two groups of 20 mice. The first group stays in space for about 30 days, while the other group spends 60 days in orbit. The Rodent Research 6 experiment will test the effects of drugs to maintain muscles in microgravity environments. Muscle loss or atrophy is a problem experienced by spacefarers, because of prolonged periods of disuse. The experimental drugs will use a capsule embedded in the skin of the mice, to deliver a steady stream of low doses through a silicon membrane. The second group of mice will be implanted with a placebo to evaluate if the drugs actually work. On returning to Earth, some of the mice will be additionally studied to check how well the drug allows for recovery on Earth after periods of spaceflight. The research promises to help control or reverse muscle atrophy in astronauts during long space missions and also promises to advance medical science on Earth, with the development of possible new therapies. The research can help improve treatments of conditions related to ageing, immobilisation and cancer.

There are several other experiments that were sent to the ISS on board the SpaceX Dragon. An experiment will measure the stress response that plants have to conditions of low oxygen supply, in microgravity environments, which will help increase the knowledge needed to grow crops in space and pioneering missions to other bodies in the solar system. A bioculture system with incubator cassettes will study cell growth in low-gravity environments. The system allows for realtime monitoring of cell cultures, and the initial test run will check if the system can successfully grow a variety of cells, including bone and heart cells. Once this is done, the system will be opened up to researchers to conduct further studies, that will help advance healthcare on Earth. 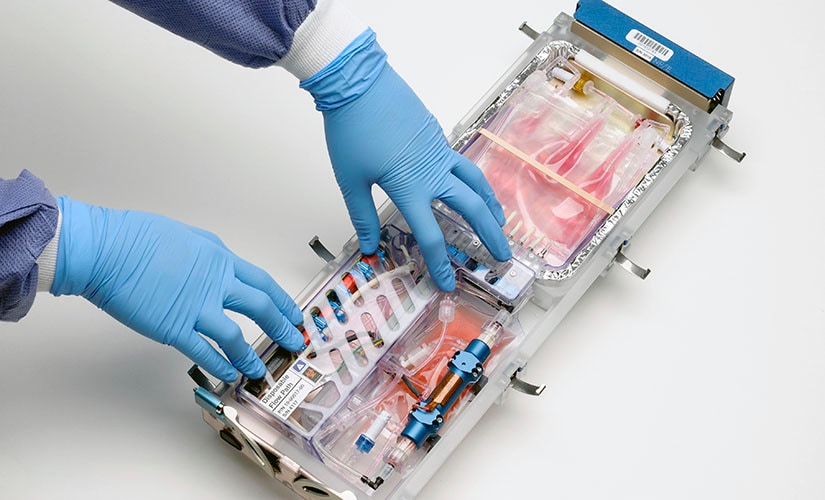 Another experiment will investigate how gravity sensing mechanisms within plants respond to simulated gravity through centrifugation, as well as plant growth in fractional gravity. The plant gravity perception will measure the lowest amount of gravity that plants are able to perceive and respond to. Another experiment is a part of a series of tests to investigate the micro-organisms that have made their way to the ISS through resupply craft as well as the astronauts. Several SpaceX missions have ferried kits for studying microbes on previous missions, and NASA is conducting a campaign to understand and track the microbes on board the ISS. One of the micro-organisms found on board the space station has not been discovered on Earth, and NASA has named this organism after the former Indian President, Avul Pakir Jainulabdeen Abdul Kalam.

There are a massive number of experiments being conducted on the ISS, and NASA has an app that makes it easier to keep track of all these various researches. The app is called Space Station Research Explorer and is available for free for the iOS and Android platforms.