Almost every second audio brand in India has launched their true wireless (TWS) earbuds in the market over the past few months, across various price points, ranging from under a thousand rupees to Rs 25,000 and beyond. While the category is fast evolving, there are still two glaring issues with most TWS earphones ― sound quality and battery life. Sony, with the launch of its latest WF-XB700 wireless earbuds, promises to address both those shortcomings while keeping the price under Rs 10,000. Let’s see if they succeed.

Each earbud is fitted with a large 12 mm dynamic driver to produce the signature bass that the Sony XB series is known for.

These Sony buds have an unusual spiral design and feel a touch bulky. However, when you wear them, they don’t look weird or stick out of the ears awkwardly. Their build quality is solid and they’re made of good quality plastic, with a predominant matte finish and a touch of gloss. Silicone tips are included and you get four different sizes of ear tips in the bundle for different sized ears. The company states that each earbud weighs just 8 gm, but they do feel a tad heavier in the hand.

Each earbud is fitted with a large 12 mm dynamic driver to produce the signature bass that the Sony XB series is known for. The capsule-shaped charging case isn’t the most compact, and weighs around 46 gm. It can be charged using any Type-C USB charger. In case you do not have one, a USB-A to Type-C cable is bundled in the package. The earbuds aren’t touch-enabled and have one physical button each that lets you perform a handful of tasks like answering calls, play/pause tracks, jump to the next/previous track and increase/decrease the volume. 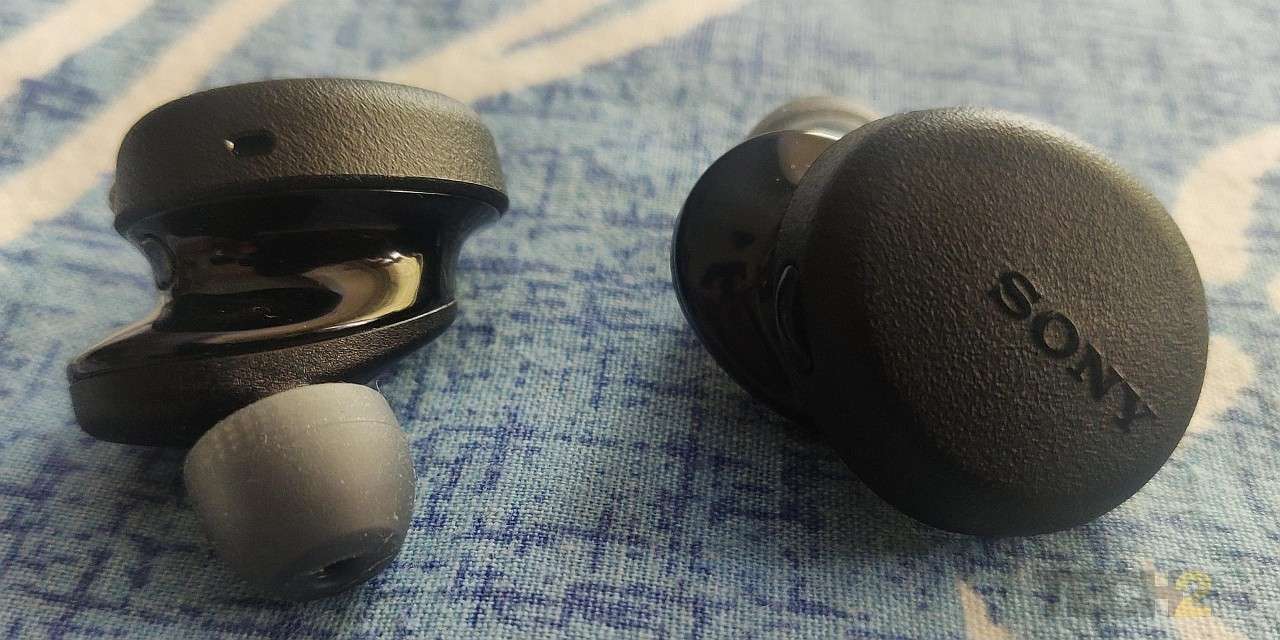 The build quality of the earbuds is solid and they’re made of good quality plastic, with a predominant matte finish and a touch of gloss.

These earbuds are IPX4 rated sweat resistant, so it’s safe to take them to the gym or for a jog without worrying about sweat messing them up. The Sony WF-XB700 are Bluetooth 5.0 compliant and support the AAC codec. However, there is no support for AptX codecs, nor is there any active noise cancellation feature or NFC here. The audio doesn’t pause automatically when you remove the buds from your ear; something that one can expect on premium earbuds. Long story short, you just get the necessary features here and nothing fancy.

While the earbuds look bulky and seem a bit heavy in hand, they fit into the ears perfectly after a bit of adjustment, and a three-point grip holds them firmly in place. The weight distribution is quite smart too and you don’t feel any major discomfort or heaviness in the ear. However, it may take a few minutes to get used to their presence, and a little longer if you haven’t used TWS earphones in the past. Also, one needs to be doubly sure that the buds are locked into the ears well, else they tend to pop out. 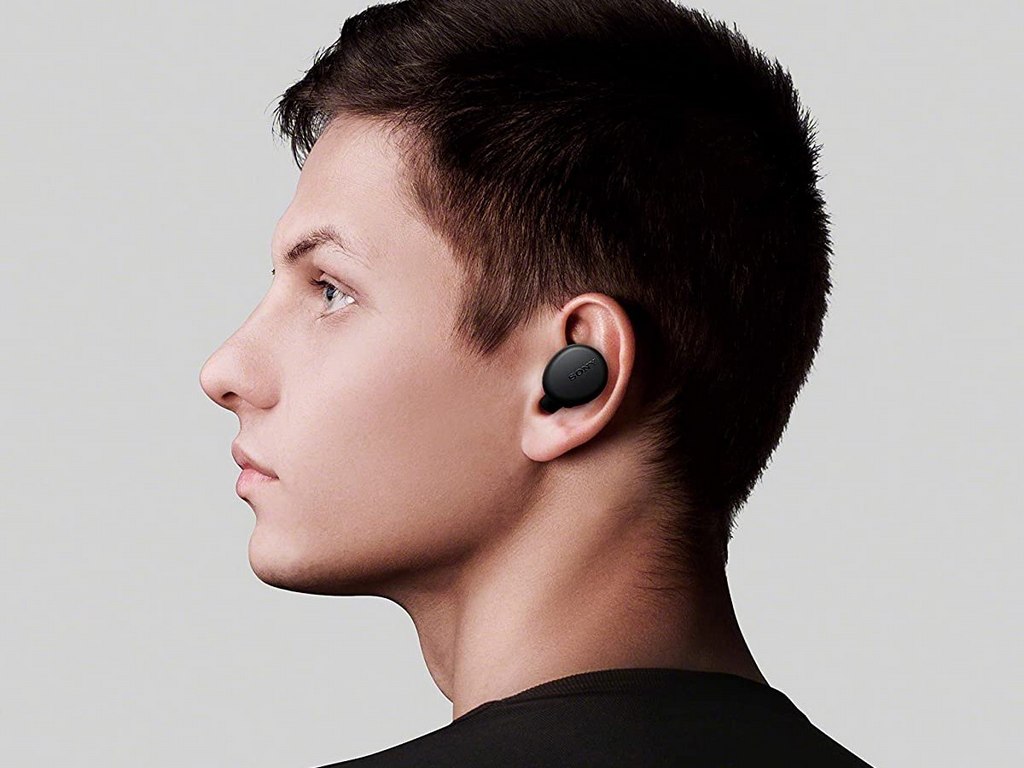 The weight distribution of the earbuds is quite smart and you don’t feel any major discomfort or heaviness in the ear.

Though there is no active noise cancellation here, the earphone design and the right sized silicone tips provide fairly solid passive noise isolation even in a noisy place. So much so, that I couldn’t hear the sound of a running tap on a metal sink in front of me or the person speaking to me from a few feet away when the music was turned on at normal volume.

Syncing the Sony WF-XB700 with the phone was a breeze. All you need to do is get the buds in pairing mode, find them in the list of Bluetooth devices on the phone, and connect. The connection stays strong for up to 10 metres without any obstructions in between, and there were absolutely no syncing issues or delays between the two buds either. However, if you need to pair these with a different device, it is advisable to disconnect them from the previous device (rather than just switching off Bluetooth on the phone) as they fail to show up in the device list at times if you don’t do that.

As I had mentioned earlier, there is a tiny physical button on each of the earbuds, but the instruction manual doesn’t explain the full extent of their functionality. After fiddling around a bit, I realised what they can do. The button on the left bud can be pressed once to increase the volume, and press and hold it to decrease it. As for the button on the right bud, single press pauses or resumes the audio, double click takes you to the next track and triple click to the previous track. Sony could have kept things a bit simpler here. If you can’t remember all that, you can simply do the needful directly from the phone.

The Sony WF-XB700 are sufficiently loud even outdoors, and there was no need to take the volume level beyond 70 percent during the course of my testing. It stayed between 50 and 70 percent throughout. As for the sound quality, though not perfect, it is one of the finest I have heard on TWS earphones. These earphones belong to Sony’s Extra Bass (XB) series, and understandably, the low frequencies are boosted. There is ample bass, but it is quite tight with a lot of thump. Yes, the extra bass does come at the cost of certain midrange frequencies; mids sound a bit suppressed occasionally, but not overly so.

No such issues with the highs though; they are reproduced very well and sound sharp without sounding harsh. There is ample detail in the sound output and the soundstage is pretty decent too. Though these earphones tend to be a bit bass-heavy, the engineers haven’t overdone it, and the overall sound is quite enjoyable. But at times I did wish for some kind of equaliser to tone down the bass in certain tracks.

Most genres of music sound good on these Sony earbuds, but they are best suited for Bollywood numbers, dance tracks and EDM, where the extra bass makes such music more fun. Rock or Metal doesn’t sound bad, but instrument-heavy tracks can be a bit of hit-or-miss on this pair. Having said that, I can safely say that the overall sound quality of the Sony WF-XB700 is among the best I have heard on TWS earphones, and arguably the best under Rs 10,000.

There is very little to complain about in this department. Things function as expected. The person on the line was clearly audible and I was heard loud and clear by the other person too. The voice doesn’t feel hollow or tinny, and is almost as good as you get when using the phone microphone. However, a bit of ambient noise can be heard when using these earphones outdoors; something for Sony to work on.

While most TWS buds last close to 3 hours on a single charge, Sony advertises a figure of 9 hours for the WF-XB700 on a full charge. In reality, I got close to 10 hours out of them, when listening to music primarily, with a bit of calling. That is as good a number as I have seen on TWS buds till date. The case carries enough charge to recharge these buds fully, but just once. While other TWS buds’ cases let you recharge them at least thrice, just a single recharge sounds below par. But let’s not forget that the single recharge here is worth 9 hours of playback, which is equivalent to almost three recharges on most TWS earbuds. Ideally, I would have preferred to see the charge on the case suffice for a minimum of two recharge cycles.

Sony claims that when the buds are drained, 10 minutes of charge allows you an hour of music playback on the WF-XB700.

The battery status of the earbuds is visible on the phone they are paired with, but similar data for the case isn’t available. It takes about 2.5 hours to charge the buds fully and close to 3 hours to charge the case. Sony also claims that when the buds are drained, 10 minutes of charge allows you an hour of music playback on the WF-XB700.

The Sony WF-XB700 wireless earphones can be purchased for Rs 9,990 with a one-year warranty. Given the price tag, we cannot call them budget TWS buds, and they don’t sound like them either. They aren’t as feature-rich as some that sell for half their price, but they get two most important things right where most TWS earbuds falter ― sound quality and battery life. We will continue our quest to find good quality TWS earphones for as low a price as possible, but for now, the Sony WF-XB700 are the ones to beat under Rs 10,000.