A pair of true wireless earphones with enjoyable sound and arguably the best active noise cancellation among TWS earbuds.

The sound quality of true wireless (TWS) earphones has improved in leaps and bounds over the past twelve months. They now aspire to do everything their wired counterparts can. Active noise cancellation (ANC) seems to be the next frontier for many brands to conquer this year. The Sony WF-1000XM3 TWS earphones claim to have cracked it. So let’s see how the claim pans out. These Sony buds are quite chunky and sport an unusual design. When you put them on, they remind you of the bluetooth hands-free earpieces of yesteryear. Their build quality is solid, with a predominantly matte finish and a bit of gloss for the touch-enabled zones. You have hints of copper accents around the microphone vents, and a Sony logo in the same colour. The pre-installed mid-sized silicone tips go into the ear canals, and you get six more pairs of ear tips in three different sizes in the bundle – 3 pairs made of silicone, 3 made of foam. 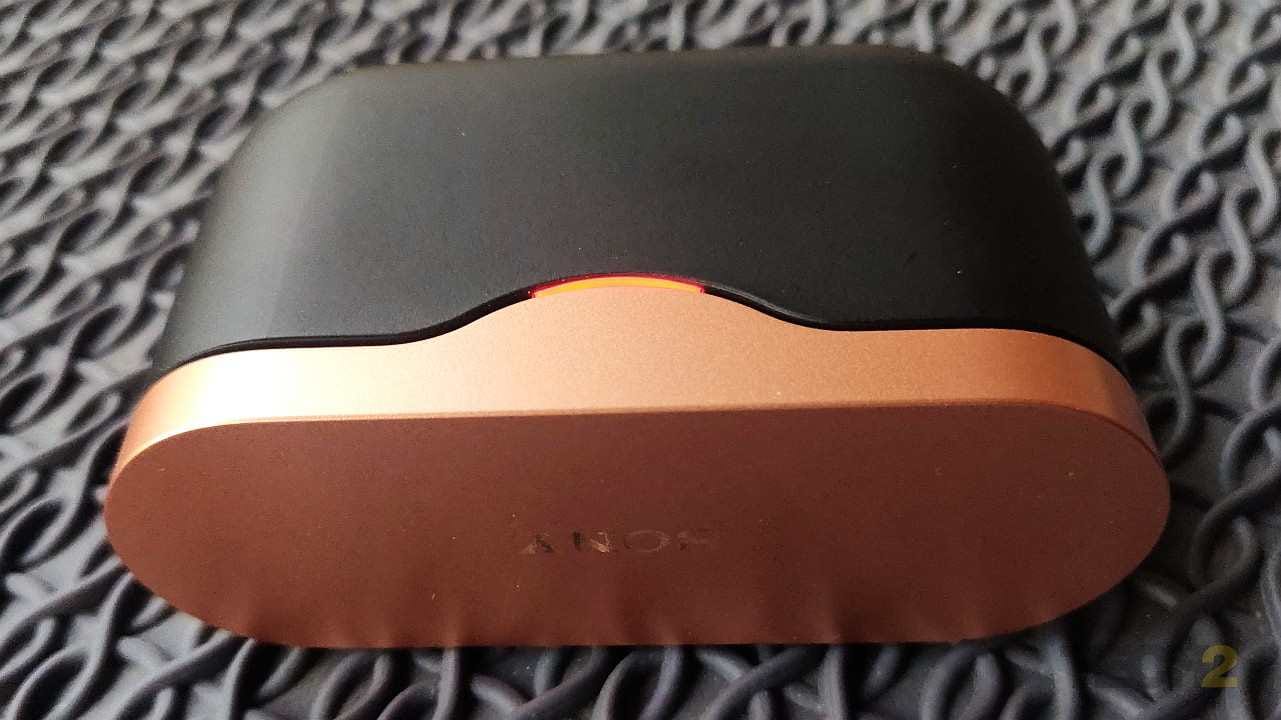 The case has a USB Type-C charging port, and USB-A to Type-C cable is bundled in the package. Image: Ameya Dalvi/Tech2

Despite the larger footprint, the earbuds are fitted with a 6 mm driver and weigh under 9 grams each. The charging case is quite bulky, and weighs close to 80 grams; among the heaviest I have come across thus far in TWS earphones. The black and copper theme continues here too, with the body and lid sporting those colours respectively. The case has a USB Type-C charging port, and USB-A to Type-C cable is bundled in the package. The earbuds are touch-enabled and let you perform a handful of tasks that can be set from the Sony Headphones Connect app.

These Sony buds are quite chunky and sport an unusual design. Image: Ameya Dalvi/Tech2

There is no IP rating for dust or water resistance for these earbuds; quite strange given the premium pricing. That’s not the only thing missing here. The Sony WF-1000XM3 are Bluetooth 5.0 compliant, but support only SBC and AAC codecs. There is no support for Qualcomm’s aptX or Sony’s own LDAC codecs, which is quite a strange decision on the company’s part. You do get wear detection sensors, so the audio pauses automatically when you remove the buds from your ears, and resumes when you put them back on.

Though the earbuds look bulky, they fit into the ears reasonably well after a bit of adjustment and provide good passive noise isolation. The weight distribution is good and you don’t feel any discomfort or heaviness in the ear. For some, it may take a while getting used to their presence. The fit could have been a little better though. It is fine when you are seated, but when you walk around wearing the buds, it feels like they may come off, and you tend to adjust them more often than you should. Do spend a couple of minutes choosing the right sized ear tips, as that goes a long way in achieving good noise cancellation.

Do spend a couple of minutes choosing the right sized ear tips, as that goes a long way in achieving good noise cancellation. Image: Ameya Dalvi/Tech2

Syncing these earphones with the phone was a breeze. The connection stays strong for a little over 10 metres with a clear line of sight, and up to 6 metres with a concrete wall in between; perfectly acceptable range. Like most Sony wireless earphones/headphones, if you need to pair these with a different device, it is advisable to disconnect them from the previous device (rather than just switching off Bluetooth on the phone) as they can fail to show up in the device list if you don’t.

The Sony WF-1000XM3 supports three listening modes — “Noise Cancellation On”, “Ambient Sounds On” and “Ambient Sounds Off” (Normal mode). You can toggle through them by tapping the left earphone once. The amount of ambient noise that you want them to let in can be fine-tuned in the Sony Headphones Connect app. The app also gives you access to several other audio settings, including equalisers if you wish to tweak the sound further, switching DSEE on or off and 360 reality audio setup.

The app also lets you decide what you want the touch controls to do. The problem here being that the options are available in sets, and one cannot be specific about each functionality. For instance, if you select ‘Playback control’ for the right earbud, a single touch will be assigned Play/Pause function, double tap for next track and triple tap for previous. You cannot change that. That leaves you with a choice between volume control or ANC toggle for the left bud, but not both. I wish things could have been more granular than that, with the freedom to assign specific functions to different touch gestures for each earbud. Hopefully, Sony will address that in future updates.

Moving on to the sound quality, the Sony WF-1000XM3 are sufficiently loud even outdoors, and the volume rarely passed the 70 percent level during the course of my testing. As for the sound quality, it is one of the finest I have heard on TWS earphones. The sound signature isn’t perfectly neutral, with the lows given a bit of preference resulting in a hint of additional warmth in the sound, making it more enjoyable for most. The bass isn’t remotely as excessive as in case of Sony’s XB series of earphones like the WF-XB700, and doesn’t overshadow other frequency ranges. But there’s enough punch to feel the beats, and not just hear them.

The mids are reproduced quite well, with clear vocals and ample instrument separation. The highs are sharp without being sibilant, and the overall detail in sound is excellent. There is very little to complain about in imaging and sound stage departments as well. Most genres of music sound good on these Sony earbuds, and I cannot think of any that wouldn’t be enjoyable on this pair. And all this over AAC. I wonder how much better things could have been with the extra bandwidth of aptX or LDAC, had it been available. Frankly, the decision to exclude those codecs on a device like this continues to baffle me.

While the sound output is very good, the active noise cancellation is even better on the Sony WF-1000XM3, courtesy of the QN1e processor in conjunction with the feedback and feed-forward microphones. I will go to the extent of saying that this is the best ANC I have experienced on TWS earphones till date. It cuts down on a lot of ambient noise, and the whir of my ceiling fan was completely silenced. I listened to some music on these earbuds in the living room while others were watching TV. With ANC turned on, though the TV sound wasn’t muted one hundred percent, it was hardly a factor once the music started playing.

I would term the call quality on the WF-1000XM3 acceptable but not exceptional. The person on the line was clearly audible, and I was heard with reasonable clarity by the other person too. The voice feels slightly heavy or bassy, rather than sharp as compared to what you get when using the phone microphone and earpiece. The earphones do a good job of cutting out a lot of ambient noise when outdoors, which is a big plus.

Sony claims a battery backup figure of six hours for the WF-1000XM3 on a full charge with ANC on. In reality, I got a shade over five and a half hours out of them, when listening to music primarily with a bit of calling, which is more than decent, given that I had ANC switched on throughout. The case can recharge these buds thrice more, thus taking the total battery backup upwards of 22 hours, which is pretty good. Without ANC, you can get a couple more hours out of the buds, and a total of 30 hours with the charging case. The battery status of each earbud as well as that of the charging case is visible in the accompanying app. While the earbud readings are more accurate, the figures for the case are approximate, and decrease by 10 to 20 percent at a go. It takes about 90 minutes to charge the buds fully and close to 3 hours to charge the case using a standard USB type-C charger. Sony also claims that when the buds are drained, 10 minutes of charging in the case gives you 90 minutes of music playback; quite a handy feature when in a rush.

The Sony WF-1000XM3 noise-cancelling TWS earphones can be purchased for Rs 19,990 with a one year warranty. They often sell for a couple of thousand cheaper online. Yes, they are expensive but offer arguably the best active noise cancellation among TWS earphones available in India. The sound quality is impressive too, with a warm and detailed sound profile, and good enough to hang around with the best in the business from Apple and Sennheiser. They could have been much better with support for a better Bluetooth codec such as aptX or LDAC, and some kind of certified moisture resistance. Even without those features, they are still one of the best around in terms of sound output, and more so if you value ANC.