Sony has unveiled the RX0 waterproof action camera at a price of Rs 64,990 in India. Along with this, Sony has also launched the Rs 49,990 SEL18135 lens and both these items will be available for purchase from today at Sony Center, Alpha Flagship Stores, and Sony authorised dealers. 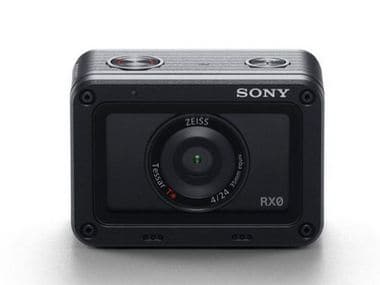 The Sony RX0 has a 1.0-inch Exmor RS CMOS image sensor and it can support sensitivity up to ISO 12,800. The lens also has a fast shutter time of 1/32,000 of a second and can shoot at up to 16 fps frame rate and also super slow motion footage at 960 fps. The camera has a wide-angle ZEISS Tessar T 24mm lens with an aperture of f/4. Sony's proprietary Anti-Distortion Shutter feature gives the camera a shutter speed as low as 1/32000 and also reduces the rolling shutter effect.

The RX0 is IP68 certified and can survive a plunge for up to 60 minutes at a depth of 10 meters. As per Sony, this depth can further be increased to 100 meters when the RX0 is attached to the MPK-HSR1 housing. The camera also happens to be shock-resistant and can survive a fall from up to 2 meters.