A storm from the broiling sun turned the chilly northernmost skies of Earth into an ever-changing and awe-provoking art show of northern lights on Tuesday.

Stockholm: A storm from the broiling sun turned the chilly northernmost skies of Earth into an ever-changing and awe-provoking art show of northern lights on Tuesday.

Even experienced stargazers were stunned by the intensity of the aurora borealis that swept across the night sky in northern Scandinavia after the biggest solar flare in six years.

"It has been absolutely incredible," British astronomer John Mason cried from the deck of the MS Midnatsol, a cruise ship plying the fjord-fringed coast of northern Norway.

"I saw my first aurora 40 years ago, and this is one of the best," Mason told The Associated Press, his voice nearly drowning in the cheers of awe-struck fellow passengers.

US space weather experts from the National Oceanic and Atmospheric Administration said Tuesday evening that so far they had heard of no problems from the storm that triggered the auroras, which made it as far south as Wales, where the weather often doesn't cooperate with good viewing. 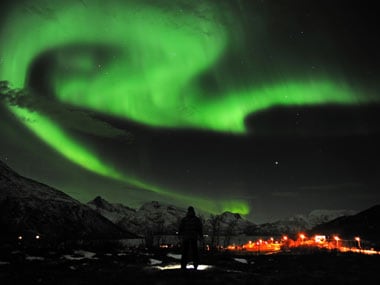 The aurora borealis, or Northern Lights, are seen near the city of Tromsoe, northern Norway. AP

It was part of the strongest solar storm in years, but the sun is likely to get even more active in the next few months and years, said physicist Doug Biesecker at the US Space Weather Prediction Center in Boulder, Colorado.

"To me this was a wake up call. The sun is reminding us that solar max is approaching," Biesecker said. "A lot worse is in store for us. We hope that you guys are paying attention. I would say we passed with flying colours."

Even before particles from the solar storm reached the Earth on Tuesday, a different aurora Monday night was dancing across the sky as far south as Ireland and England, where people rarely get a chance to catch the stunning light show.

Tuesday's colourful display may not have moved that far south, limiting its audience, but those who got to see it got brilliance in the sky that had not been around for years.

"It was the biggest northern lights I've seen in the five-six years that I've worked here," said Andreas Hermansson, a tour guide at the Ice Hotel in the Swedish town of Jukkasjarvi, above the Arctic Circle.

He was leading a group of tourists on a bus tour in the area when a green glow that had lingered in the sky for much of the evening virtually exploded into a spectacle of colours around 10:15 p.m.

"We stopped the bus. And suddenly it was just this gigantic display of dancing lights and Technicolour," said Michele Cahill, an Irish psychologist, who was on the tour. "It was an absolutely awesome display. It went on for over an hour. Literally one would have to lie on the ground to capture it all."

An aurora appears when a magnetic solar wind slams into the Earth's magnetic field, exciting electrons of oxygen and nitrogen.

The northern lights are sometimes seen from northern Scotland, but they were also visible Monday night from northeast England and Ireland, where such sightings are a rarity. Scientists have been expecting solar eruptions to become more intense as the sun enters a more active phase of its 11-year cycle, with an expected peak in 2013.AP

"The lights appear as green and red mist. It's been mostly green the past few nights. I don't know if that's just special for Ireland," said Gerard O'Kane, a 41-year-old taxi driver and vice chairman of the Buncrana Camera Club in County Donegal in Ireland's northwest corner.

He and at least two dozen amateur photographers were meeting after dark at a local beach for an all-night stakeout. They've been shooting the horizon from dozens of locations since Friday night.

Scientists have been expecting solar eruptions to become more intense as the sun enters a more active phase of its 11-year cycle, with an expected peak in 2013.

But in recent years the sun appeared quieter than normal, leading scientists to speculate that it was going into an unusually quiet cycle that seems to happen once a century or so.

While the geomagnetic part of the solar eruption - which happened around 11 p.m. EST Sunday - was more of a fizzle, another earlier part of the sun's outburst was more powerful.

On Monday and Tuesday, the proton radiation from the eruption reached strong levels, the most powerful since October 2003. That mostly affects astronauts and satellites, but NASA said the crew on the International Space Station was not harmed and only a few minor problems with satellites were reported, Biesecker said.

However, some airplane flights over the North Pole have been rerouted because of expected communication problems from the radiation.

Geomagnetic storms cause awesome sights, but they can also bring trouble. According to the National Oceanic and Atmospheric Administration, problems can include current surges in power lines, and interference in the broadcast of radio, TV and telephone signals. No such problems were reported Tuesday.

Peter Richardson, a 49-year-old bar manager and part-time poet at the 17th-century Tan Hill Inn in northern England, said the pub - normally dead on a Monday night in January - was thronged until the wee hours of the morning with people who came to look at the lights.

"I just thought: 'Oh my God, this is just absolutely amazing,'" he said. "You do get a lot of spectacular skylines out here, but that was just something out of the ordinary. Very different."

Ken Kennedy, director of the Aurora section of the British Astronomical Association, said the northern lights may be visible for a few more days.

The Canadian Space Agency posted a geomagnetic storm warning Tuesday after residents were also treated to a spectacular show in the night sky.

"It's not likely people in the major Canadian cities further south will see a significant aurora tonight," he said. "There's always a possibility but the current forecast is for a good show for people who live further north. It should be a particularly good night tonight."