During the total solar eclipse, a team of solar physicists are planning to capture high-resolution sunspots at microwave radio wavelengths.

During the upcoming total solar eclipse on 21 August, a team of solar physicists are planning to capture high-resolution sunspots — the visible concentrations of magnetic fields on the Sun's surface — at microwave radio wavelengths. 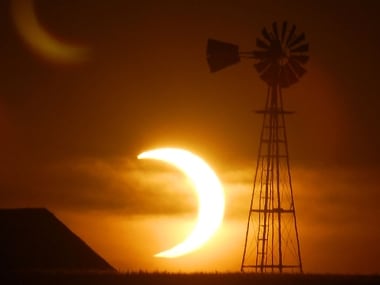 Sunspots are the primary generator of solar flares, the sudden, powerful blasts of electromagnetic radiation and charged particles that burst into space during explosions on the Sun's surface.

Their turning motion causes energy to build up that is released in the form of flares.

"Radio waves from the solar corona have long wavelengths, and as resolution is proportional to wavelength, our images ordinarily have rather low spatial resolution. But we can capture sharper images as we move in the direction of the Moon's motion as it blocks different parts of the Sun at different times," said Dale Gary, professor at the New Jersey Institute of Technology (NJIT).

"Radio waves are sensitive to the otherwise invisible corona of the Sun, especially its magnetic field, so we will use the eclipse to make high-resolution images of the corona above active regions."

Using the NJIT's Expanded Owens Valley Solar Array (EOVSA) and from the Jansky Very Large Array (VLA) radio telescope, the researchers will be able to cover between 75 to 80 percent of the sunspots at microwave radio wavelengths.

As both EOVSA and the VLA have much greater capabilities the researchers can expect much better radio images and more complete frequency coverage from which to deduce the magnetic field, temperature and density of the corona.

The solar science to be addressed focuses on the magnetic structure of the solar corona, on transient phenomena resulting from magnetic interactions, including the sudden release of energy and subsequent particle acceleration and heating, and on space weather phenomena, the researchers said.

The total eclipse of the Sun, to be visible across the US, will trace out a 70-mile-wide band across 14 states.