Snapchat brings out a new Lens which not only responds to what its sees, but also to what it hears

Snapchat with its ever-growing range of filters has launched a new Lens that reacts to sound.  It has en-captured its users by bringing out the famous dog lens which is known as the 'face lens' and puts in animated voices to make us sound cooler. 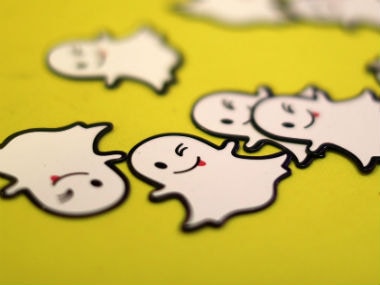 The logo of messaging app Snapchat is seen at a booth at TechFair LA, a technology job fair, in Los Angeles, California, Image: Reuters

Also there is 'World lens' that lets users recreate and re-imagine their surroundings.

According to a report in Engadget, the company has said that it will bring out more in the coming weeks.

The newest Lens is an animal mask overlay for your face, with whiskers and ears, like many other filters that Snapchat provides, but the peculiar thing is that the ears and eyes do not only respond to what they sees, but also glow and bob to what they hear.

While it may not be as mind-boggling as the sky whale lens that uses the sky segmentation technology, Snapchat says that it is the first of many to come. Also, earlier in April, Snapchat introduced its 'Lens Studio' software which allowed users to make their own 3D and 2D Augmented Reality (AR) filters.

The lens is available on the application. So try it out for yourself and see whether it moves to your beats.

PS: Cough loudly for your animated ears to glow and bob.