A WiFi chip has also been added by Snap to the new Spectacles that makes it easier for users to transfer content to their Snapchat app.

Snapchat has just launched an updated version of its Snap Spectacles with a number of improvements over the original including the ability to take still images and throw in water-resistance as well. 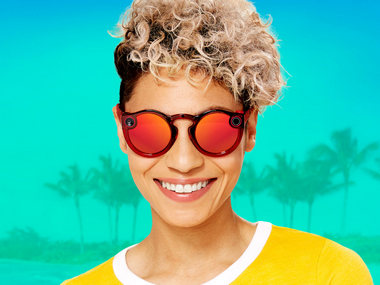 Snapchats new Spectacles which were earlier priced at $129.99 and sadly never made its way to India, will now cost $20 more in the US and will be available exclusively on Snap's website beginning 26 April.

In terms of design, the updated Spectacles look pretty much the same except that it is now noticeably slimmer. This slim form factor becomes especially evident while looking at the left and right sides of the sunglasses which house the battery and the image sensor. The Spectacles also no longer sport a solid color and now gets a color gradient which fades to a clear shade, making it look a tad different from the original. While the first version was available in black, teal and coral, the new Spectacles will be sold in only onyx, ruby and sapphire shades.

Apart from the major additions which include water resistance and still photos, according to Snap has also gone ahead and improved the audio reception capabilities on the new sunglasses. The new Spectacles now sport two microphones instead of one to improve the audio quality of far-field voices while also helping out with noise reduction. A WiFi chip has also been added that makes it easier for users to transfer content to their Snapchat app. All photographs and videos shot with the sunglasses will now be automatically imported in HD resolution over WiFi, unlike the first generation shades which first imported videos in SD over Bluetooth. Other smaller improvements also include a marginally better camera sensor. Battery life, however, remains the same. As far as improvements go, this is definitely worth the extra $20 Snap is expecting users to shell out. We do hope this is brought to India though it seems unlikely.

Story of Snapchat: How the disappearing photo app managed to stay relevant

Snapchat rebrands itself as Snap Inc and launches Spectacles camera