The Snap spectacles description labels the Snapchat glasses as "Model 002" reaffirming that the new spectacles will be the second version of the Snap glasses.

Snap Inc. seems to be planning the launch of the next version of its Snap Spectacles. 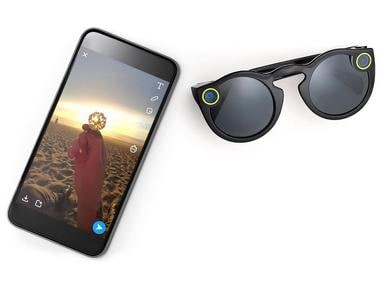 The first generation of Spectacles, launched in 2016, could be used to record short record videos by just pressing a button. The recorded videos got saved into the Snapchat app which could then be imported or downloaded to share it on the Snapchat.

According to a report on the Verge, the new version of the Snap Spectacles has been mentioned as "wearable video camera" on the FCC website. The device descriptions labels the Snapchat glasses as "Model 002", reaffirming that the new spectacles will be the second version of the Snap glasses.

It is reported to come with 802.11ac Wi-Fi and Bluetooth 4.2  which will improve the file transferring capabilities.

Snapchat to shut down Lens Store on 8 January, only two months after its launch!

Facebook attempts at owning Snapchat-like Snow, but fails yet again