Smartron t.phone P first impressions: Smartron is taking the fight to its competition with a compelling package

Smartron has created a compelling device which rivals the competition in both what the hardware it is offering as well as the pricing of the device.

Smartron, a relatively new and still unknown smartphone marker from India has launched its latest smartphone, the t.phone P. The latest smartphone from the company is aimed at the devices available in the entry-level segment. The company announced the launch of the t.phone P about a week on 11 January 2018 and it will go on sale today.

This is not the first device by the company and we reviewed its initial offering, the Smartron t.phone. It had launched the device back in 2016 and was a decent device with much-needed improvements required in the camera and battery department. We also got the chance to get our hands on the srt.phone by the company where the design was somewhat lacking.

The pricing and the specifications of the t.phone P put it in direct competition against the offerings by the market leader Xiaomi in this segment.

Smartron sent us a review device and I have been playing with the device for a few hours. Is Smartron successful in mounting a challenger with the t.phone P in a segment full of fierce competition from other companies? Let's have a quick look to find out. Right out of the box, the t.phone P looks like a well-built device. It is evident that Smartron has taken care of the materials used to manufacture the device by adding a metal back along with plastic caps on the top and bottom of the device. In addition to the metal back, it seems that the frame of the device also comes with metal finish. It is unclear at the time of writing if the fame, similar to the back of the device, is made of metal. The device is sturdy with no squeaky or moving parts and it feels that it can last a while because of good weight distribution on the smartphone. Users will find a camera, proximity sensor and LED flash along with the speaker grill at the front on the top of the smartphone. The bottom packs capacitive buttons which don’t come with customisability options despite the lack of labels and the mere presence of dots allowing the company to provide the option later. 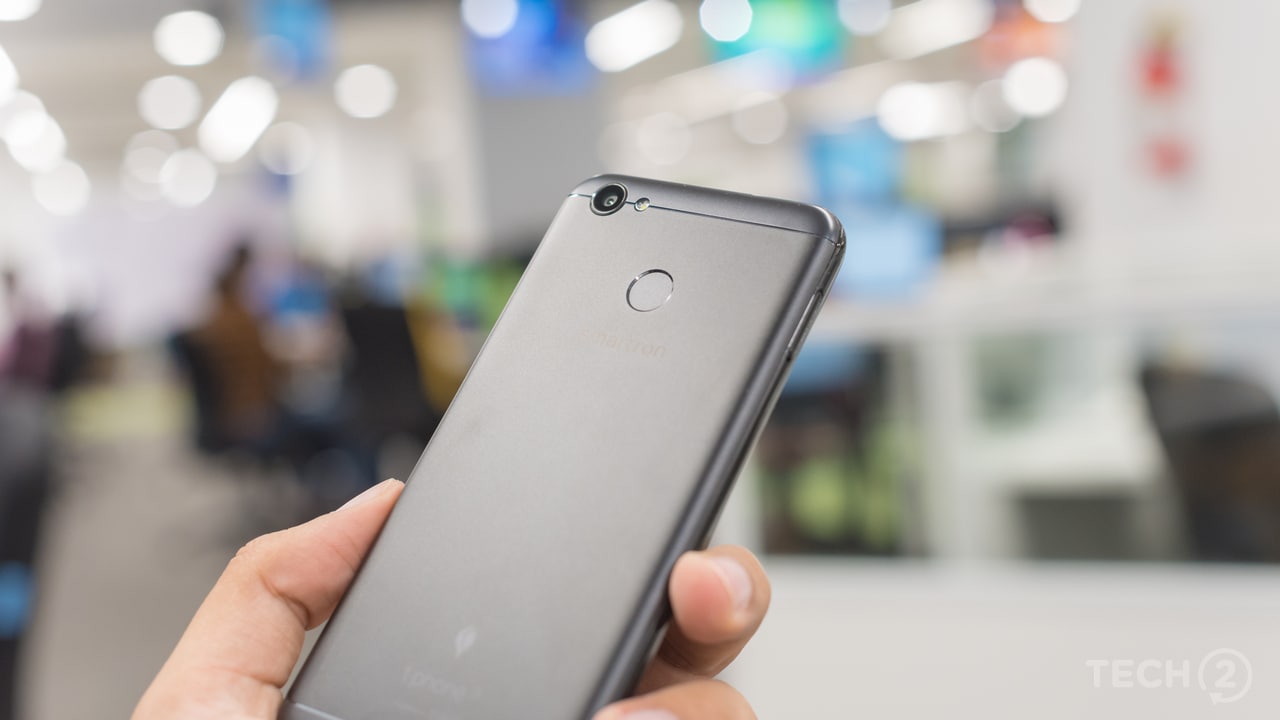 The 3.5-mm headphone jack is on the top of the device along with the speaker-grill and microUSB port on the bottom of the device. There is not much to be said about the design as it does not seem to be refined but a typical smartphone with rounded corners.

t.phone P sports a 5.2-inch IPS panel with 2.5D curved glass and HD (1280x720) resolution on the front. In the camera department, the main camera on the back comes with 13 MP sensor with f/2.2 aperture while the front comes with a 5 MP sensor and f/2.2 aperture. The interesting thing to note here is that the device comes with an OTG reverse charge technology and a fingerprint sensor. The 5,000 mAh battery is one stand out feature of the phone, specially at the price point at which it is slotted at.

The display is decent, but brightness-levels and the colour reproduction take a hit as soon as you shift the axis of the device away from you evoking a slight change in colour of the contents of the screen. 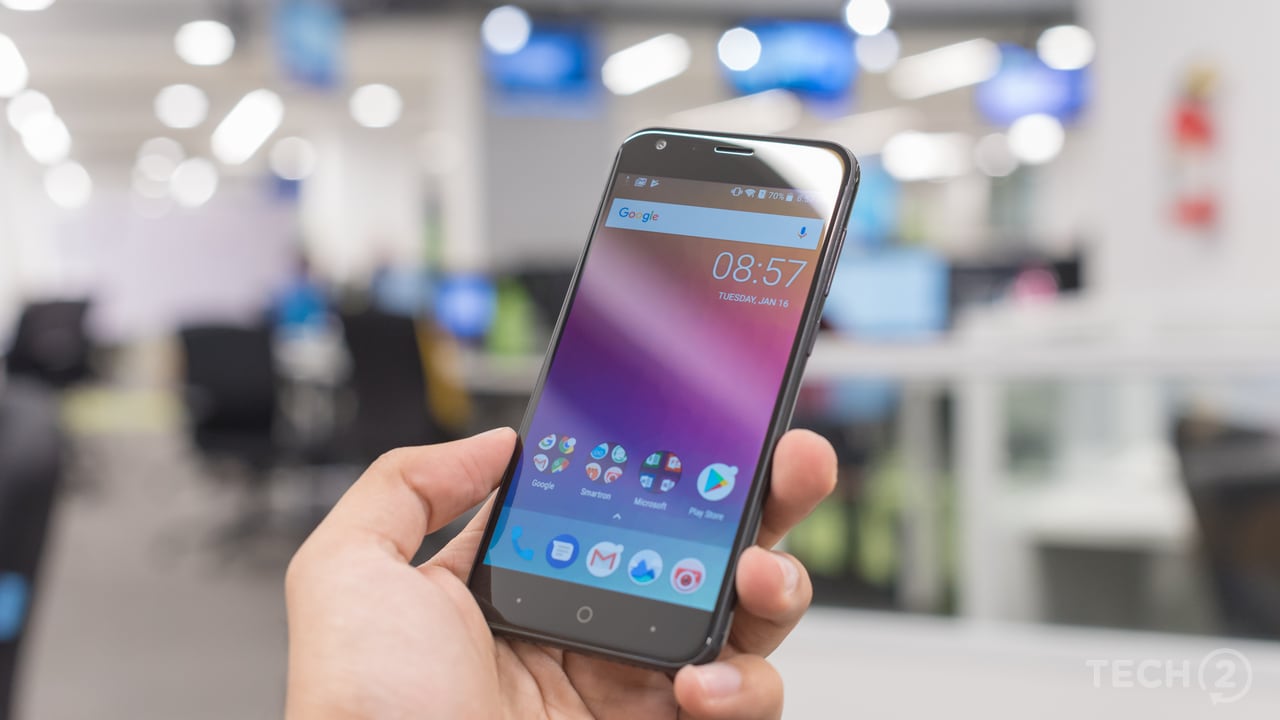 The smartphone is powered by Qualcomm Snapdragon 435 SoC with Octa-core processor clocked at 1.4 GHz and Adreno 505 GPU along with 3 GB LPDDR3 RAM. The device comes with 32 GB internal storage, 1000 GB free cloud storage as part of t.cloud and an optional slot to increase the storage by up to 128 GB with a microSD card. 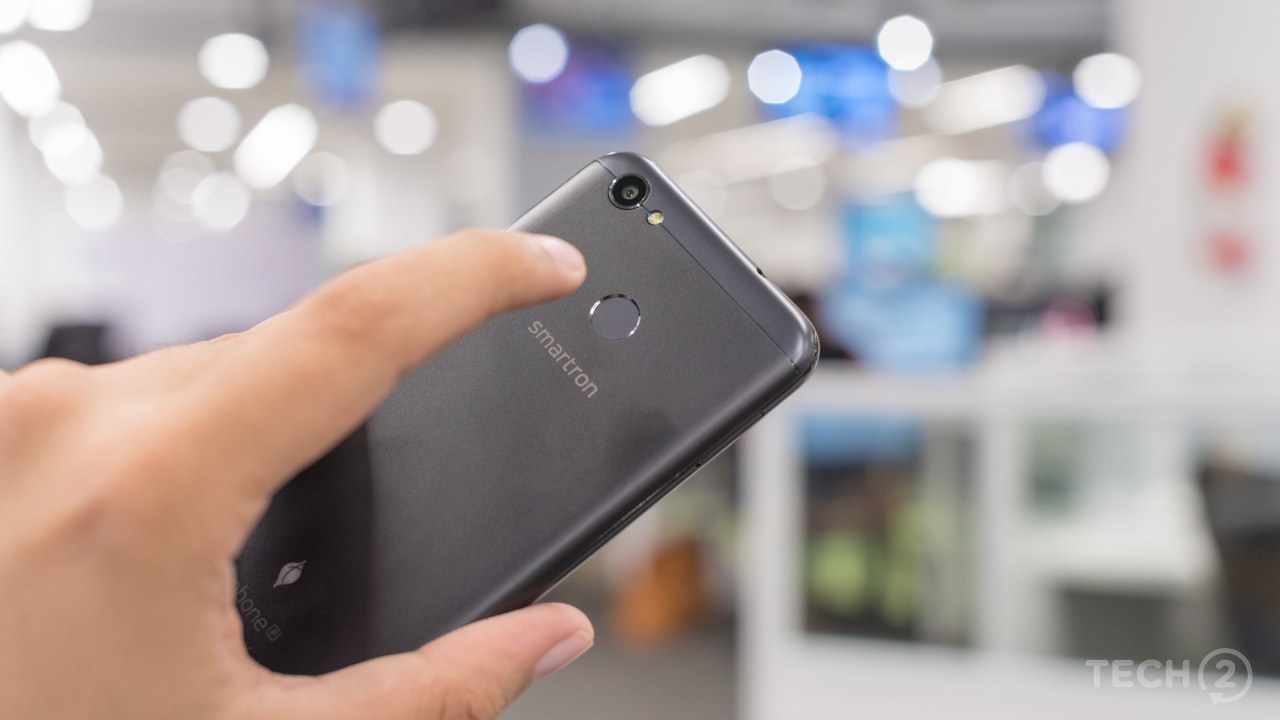 The hardware offered with the t.phone P is better than what is offered with the Xiaomi 5A and even competes with what the Redmi Note 4 offers for the price in addition to challenging the Moto E4 Plus.

t.phone P runs Android Nougat 7.1.1 based operating system along with 1 December 2017 Android security patch. The operating system may seem near stock but there are a number of minor UI tweaks along with some different icons to deviate it from being classified as ‘stock Android’. 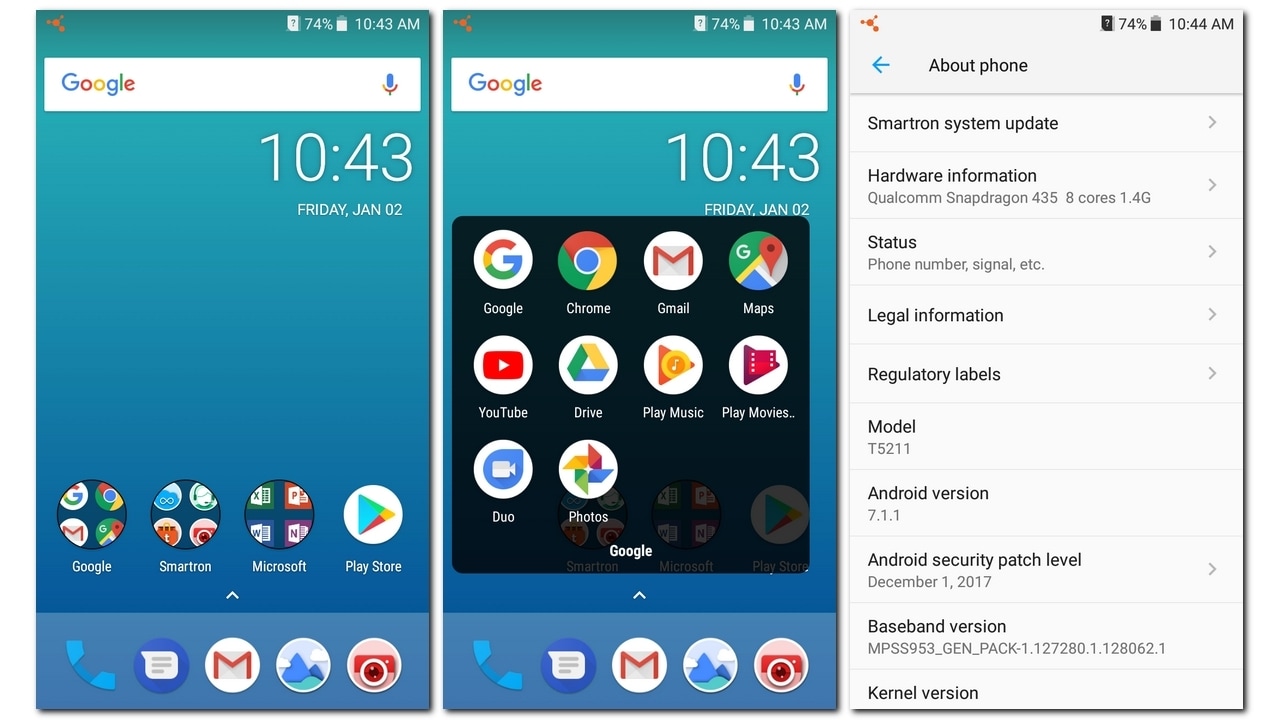 The OS comes with some bloat in the form of Smartron apps such as ‘t.cloud’, ‘t.care’, ‘t.store’, ‘Gallery’, ‘forum’, ‘FM Radio’, ‘Recorder’, and ‘Flashlight’. The interesting thing to note here is that the OS also comes pre-installed with Microsoft apps such as ‘Excel’, ‘PowerPoint’, ‘Word’, ‘OneNote’, and ‘Skype’. The general operation including the system operations worked well except for the occasional stutter or jittery behaviour. It fixed itself but it does seem that there is some optimisation that is required by my limited amount of testing the device. The image quality left something to be desired in my limited amount of testing as noise crept in the image even in decent lighting conditions. However, the competition does not offer comparatively great camera quality in the price range so there is nothing out of the ordinary. Last but not the least, the device is powered by 5,000 mAh battery which also comes with a 5V charger or 2.1 A. The company claimed that the device will last about two days and it will take about 3 hours to charge the battery from 0 percent to 100 percent. We have not been able to check the claims so you will have to wait for the full review to check that

Smartron has created a compelling device which rivals the competition in terms of the hardware it is offering as well as the pricing of the device. Not to mention that 5,000 mAh battery will be quite appealing to those who want a long-lasting device. The solid construction (regardless of the fact that manufacturing is handled by ZTE) along with the somewhat added features in form of the tronX functionality such as the t.cloud just adds to the case of the device. 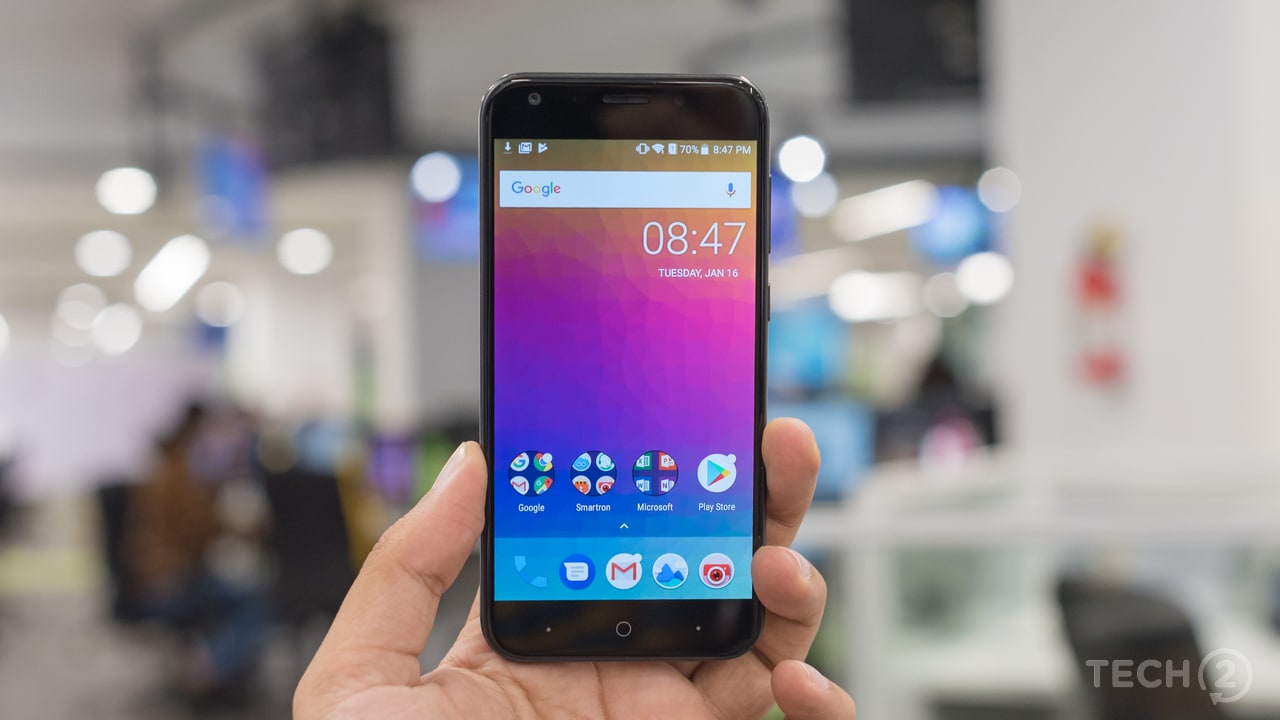 We still have to run the full battery of tests and spend more time with the device to write a comprehensive review. But it does showcase that the company has produced a real competitor.

Smartron launches tphone P for Rs 7,999, a budget smartphone with a 5,000 mAh battery

Smartron tbook will now sell on Amazon India at Rs 42,999

A smartphone and a laptop are just the beginning, says Smartron founder Mahesh Lingareddy

Smartron t.phone review: Goes beyond just hardware; but camera and battery-life are areas of concern

Smartron t.phone with Snapdragon 810 chipset launched in India at Rs 22,999