Smart watches to glasses: What will 2014 offer in wearable tech?

Wearable computing is one of the hottest topics being discussed today, and with CES 2014 taking place next month in Las Vegas, new innovations are sure to be on display.

Wearable computing is one of the hottest topics being discussed today, and with CES 2014 taking place next month in Las Vegas, new innovations are sure to be on display. While wearable cameras and smart watches will be much looked at, Angela McIntyre, Research Director at Gartner, says digital health and fitness will be one of the hottest segments at the event with 40 percent of exhibitor floor space being expanded for digital health/fitness exhibitors.

Gartner expects to see some updates and innovation in wearable cameras, smart glasses, smart watches and headsets. Smart watches from large consumer brand companies, such as the Samsung Galaxy Gear, Sony Smartwatch 2, and from start-ups, will show their new products, some of which will be available now and others for pre-orders. "We will see a range of styles and functionality for smart watches as companies experiment with designs that appeal to different potential market segments. However, an unclear value proposition will continue to steer consumers' spending toward tablets and wearable fitness device in the near term," said McIntyre providing her thoughts on what to expect from the wearable market, with a focus on the digital health and fitness segment.

Wearable cameras enable hands-free taking of photos and videos, allowing people to remain part of the action in sports, for doing their jobs, while on vacation, or when playing with children. The cameras are in smart glasses, on smart watches, or clip onto clothing. There are many cross-over applications for the workplace, such as keeping a visual record of inspections, capturing suspicious activity for security and law enforcement. 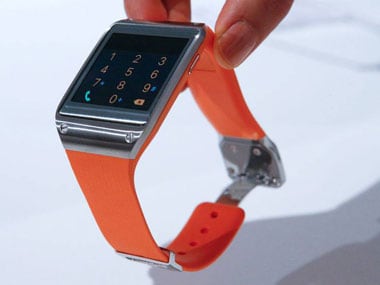 Smart glasses with augmented reality and virtual reality for gaming immerse gamers in experiences that seem real. Smart glasses are also being piloted for advertising and in retail stores for shoppers to visualise how customised products and features would appear in real-life, leading to increased revenue. Headsets can determine where we are looking, a feature that will be utilised by apps for personal navigation, and by virtual personal assistants to help with in-store shopping. Headsets that read brain waves (EEG) will be used to help improve concentration, serve as controllers for toys, and adjust music according to our moods.

Despite the hype around these products, the segments for fitness and personal health devices have been among the first to gain traction.

Wearables support the "quantified self" trend of people tracking their vital signs, activities, and capturing images of what they experience during the day. The fun of wearing and using gadgets to track fitness and health is appealing, and so is using their apps and services. Gamification enables wearers to compete against themselves or others and rewards wearers. Online communities provide camaraderie with those having similar goals. Wearable electronics provide new motivation to consumers for improving fitness and health.

Fitness and health devices are mostly composed of activity monitors, pedometers, and consumer heart-rate monitors. They may take the form of a fob or wristband, or embedded in a wrist watch, in clothing or in wearable accessories, such as shoes, hats and chest straps. The apps and services for these wearable electronics are typically provided free for use with the devices.

"At CES, we will see athletic shirts with sensors woven in to track heart rate and respiration during training and competitions. Smart undershirts for infants will monitor their heart rate, breathing and sleep. Wearable devices for home health monitoring of the elderly will include clothing and accessories, such as wristbands that can track heart rate, monitor activity level during the day, detect falls, provide location information and send alerts to caregivers. With wearable technology, the elderly may to continue to live independently with reduced risk to their health and personal safety," says McIntyre.

Now, most consumer wearable electronics will be peripherals to smartphones. How does the smartphone work with wearables? McIntyre says that customers who choose to monitor themselves with wearable electronics are arguably more likely than most to have a smartphone. Connected wearable devices use Bluetooth to pair with smartphones to access the Internet. The smartphone serves as a platform for apps to quantify consumers' efforts and provides connectivity with services to store and analyse biodata.

However, looking forward, McIntyre suggests a wireless body area network (WBAN) can reduce dependence on smartphones. A WBAN is a collection of sensors, computing devices and communication devices that are designed as wearable electronics and are wireless connected. The devices in a WBAN can communicate data and/or voice signals through a Wi-Fi or cellular access module embedded in a wearable device instead of through a smartphone.

Working from home? Here are remedies to some tech headaches you are bound to face