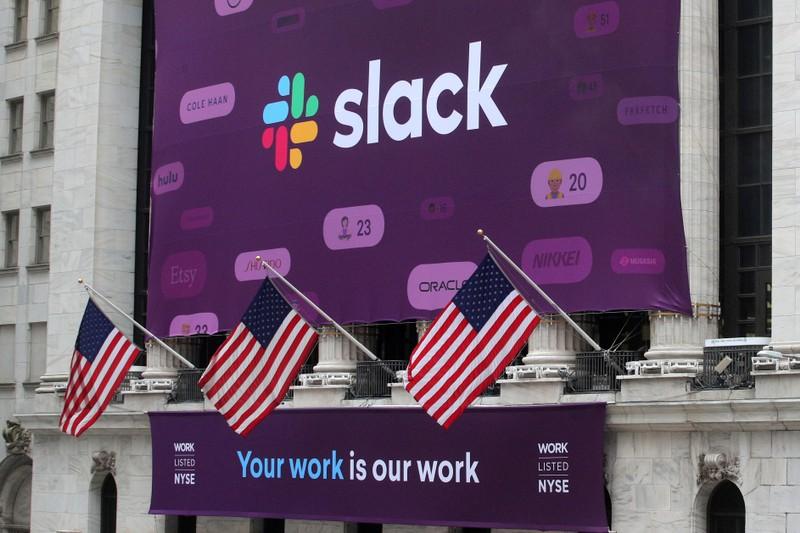 By Carl O'Donnell and Joshua Franklin

Slack's direct listing differs from a traditional IPO because it does not raise fresh funds. The method was pioneered last year by music streaming business Spotify Technology SA.

Slack's trading price gave it a valuation of more than 50 times revenue. That multiple is lower than for other tech companies' IPOs like Zoom Video Communications Inc, which trades at 88 times revenue, but is very high considering that Slack is not yet profitable, said Kathleen Smith, a principal and manager of IPO ETFs at Renaissance Capital.

"They are going to have to do an awful lot to get the company's fundamentals to justify that kind of valuation," she said.

Slack is a business-focused messaging and communications platform, similar to group chatrooms, with the ability to collaborate on documents and order conversations by groups and themes.

The Slack tool began as an internal project to improve communications at video game company Tiny Speck, which eventually became Slack Technologies and focused on developing the communications software.

Slack's listing opened with about 40 million shares trading to outside investors, providing better-than-expected liquidity for the stock, a person familiar with the matter said.

The debut follows a spate of high-profile technology IPOs, some of which, including Uber Technologies Inc and Lyft Inc, had disappointing starts to trading.

The direct listing model offers Slack an opportunity to save significantly on investment banking fees and avoid restrictions on insider stock sales.

"We think a direct listing is a more effective and efficient way to get to a normalized level of supply and demand without the constraints of an IPO,” said Allen Shim, Slack's chief financial officer.

Slack's direct listing could have implications for other large technology companies such as Airbnb Inc, which is considering going public through a similar approach, one person familiar with the matter said.

The strong open built on a string of successful IPOs for enterprise software companies, said Alejandro Ortiz, a principal analyst at SharesPost.

"Investors have a love affair with enterprise software companies, and with good reason. They continue to perform very well," he said.

Spotify's direct listing in April 2018 was perceived as a success at the time, although shares have fallen as the company sacrifices profit margins for growth.

"But it's definitely more appropriate for companies that have raised larger sums for longer periods of time in the private market, and are really wanting to give their investors an upside or an exit."

"We are in a growth phase right now and we are continuing to invest, but we expect to hit breakeven cash flow soon," CFO Shim said.