The urgency to invest, not only in sewers, but in the treatment of sewage has never been greater.

The Ganges is a lifeline for millions of people who live within its catchment as a source of water, transport and food. During the Hindu pilgrimage known as Kumbh Mela the Ganges plays host to the largest human gathering on Earth as 120m people arrive to bathe in the river over 49 days.

Despite its tremendous spiritual significance, the Ganges is also notorious for having some of the most polluted water in the world. For 79% of the population of the Ganges catchment, their nearest river fails sewage pollution standards for crop irrigation. Some 85% of the population live near water that isn’t safe for bathing and Allahabad – where Kumbh Mela takes place in 2019 – is one of those places.

Our own research suggests that as the number of people living in nearby cities increases, the problem with water quality in the Ganges worsens. Urban populations in the Ganges catchment contribute around 100 times more microbial pollution per head to the river than their rural counterparts. This means that untreated sewage discharged from a sewer appears worse for river water quality than sewage discharge where there are no sewers at all. 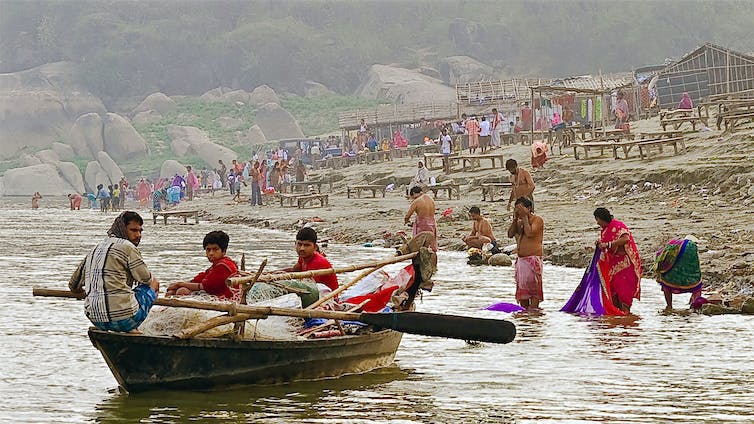 The waters of the Ganges catchment are vital for life here at Jahangira Island, but pollution is a health risk. Jack Wickes/Flickr, CC BY-ND

When we examined 10 years of water quality data we found that the concentration of faecal coliforms – a common pollution indicator found in human faeces – increased when the density of people living upstream increased. This makes sense: more people means more poo.

But we also found that people living in cities in India contribute more pollution per person than those in rural areas – how much more depends on the population density. A person living in an area in India with 1,000 people per km², a density similar to central London, contributes on average 100 times more pollution to the nearest river than they would in an area with 100 people per km² – say, rural Devon in the UK.

So why does it appear that a person living in an Indian city produces more sewage pollution than someone living in the countryside?

Of course, people in the cities are unlikely to actually contribute significantly more faeces than those in rural communities. Instead, it’s probably sewers that are to blame. In cities, extensive sewage networks efficiently flush sewage to the river, whereas in rural areas more people defecate in the open or in pit latrines. This means faeces in rural areas are less likely to be washed into the river and the bacteria and viruses they carry are more likely to die in situ.

As the population density of a place increases, sewers become more common. Sewage removal is essential for the protection of public health, but without effective treatment, as is typically the case in the Ganges catchment, it comes at the cost of increased river pollution and waterborne diseases for people living downstream.

It’s therefore clear that water quality in the Ganges is a more complex and widespread problem than previously thought. We’d expected that cities, with their more advanced sewage management, would be better for the river. What we found was the opposite – more sewers without sewage treatment makes river pollution worse.

The urgency to invest, not only in sewers, but in the treatment of sewage has never been greater – especially in the most densely populated areas. However, the Western approach of taking all waste to a central treatment plant is expensive and so may not be the best solution.