As far as audio quality goes, the CX150 BT’s boast of no egregious faults; it's the design that needs work.

I’m not sure what to think about the Sennheiser CX150 BT. On the one hand, they could be the best-sounding wireless earbuds in their price range, on the other hand, their design makes very little sense.

They do sound good…

As far as audio quality goes, the CX150 BT’s boast of no egregious faults. There’s bass, they’re not too screechy, and there’s enough dynamic range to keep any track sounding lively enough for the average user.

At Rs 4,499, you get AirPods Pro beating sound quality, which in itself is worthy of a recommendation in my books. Additionally, rival sets from the likes of Xiaomi and OnePlus don’t sound quite as good, though I do think the latter are better designed; more on that later. 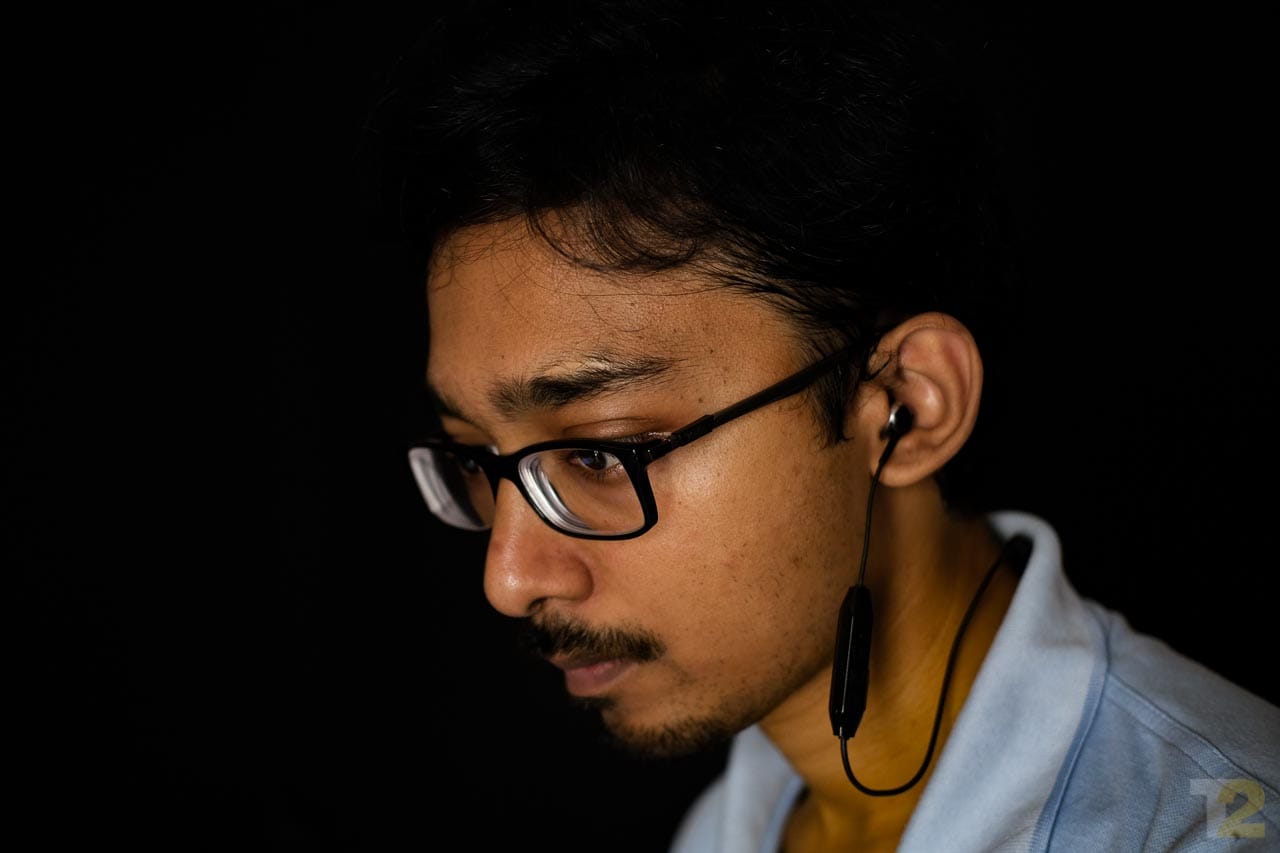 The 'neckband' is just a freely dangling wire. There's no sense of security when the earbuds aren't plugged into your ears. Image: Anirudh Regidi

Given that I spend half my day with my ears ensconced in a pair of premium, open-backed headphones, I have some complaints, but also bear in mind that I’ve set the bar a little too high for this class of earbuds.

To my overly critical ears, the CX150 BT is a little bit flat. The sound seems over-damped: bass notes don’t get a chance to really flourish, and heavy segments in songs — which will be common in heavy metal or rock tracks — will seem a tad muted. It’s for this reason that I also find the movie-watching experience a bit less immersive than I’d like.

It’s a great set for vocals, though, which sound pretty good, and the aforementioned lack of screechiness is a big plus in this department. It’s also more than most sets in this price range can manage. I wish the two earpieces would clamp together magnetically. It'd make for a more secure design. Image: Anirudh Regidi

The sound quality at this price presents such good value, in fact, that despite its design flaws, I’m tempted to pick up a set for myself.

Battery life is good, and I found myself needing to charge the set every two-three days or so, and I listen to a lot of music. Speaking of charging, it’s nice that Sennheiser opted for USB-C, which means one fewer cable to carry. A full charge seems to take about 90 minutes, which aligns with Sennheiser’s claims.

Connectivity is at least as good as with Apple’s AirPods, with the signal managing to travel through some walls without dropping out. Microphone quality is acceptable.

… but they don’t sit right

The reason I like AirPods, despite the relatively poor audio quality for the price, is sheer convenience. They’re brilliantly simple to use and I can reach for them unthinkingly.
Not so the CX150 BT. They’re not the worst-designed set around, but they’re certainly far from the best.

First, there’s the control scheme. There are only three buttons, and while the volume buttons control, well, volume, the middle button is responsible for everything from power to play/pause to pairing to skipping tracks backwards and forwards to answering and disconnecting calls. Why that button has to work so hard I’ve no idea. There’s also no direct support for triggering a voice assistant, which in 2020, seems like too obvious a feature to miss out on. Three buttons. That's all you get for controlling volume, playback, pairing, track control, and dealing with calls. Image: Anirudh Regidi

The biggest issue, though, is the design of the set itself. Neckbands, as the name suggests, are supposed to go around your neck. There’s usually a stiffish band that rests around your neck, and the earbuds dangle at the end of flexible wires. The more decent sets include magnets in the earbuds so that unplugged buds can snap together. Usually, this action also triggers a play/pause function, where snapping the buds together pauses whatever track you’re listening to, resuming said track when unsnapped.

In the CX150’s case, there’s no band as such. There’s just a loose cable that rests around your neck, with a weighted box — containing the battery — that rests on the nape of your neck. Also, the earbuds are rounded and have no magnets, so they just dangle freely when not in use.

This is a huge problem for two reasons:

As a package, I almost like the CX150 BT. It takes itself a bit too seriously in the sound department — it’s functional, but lacks that spark that would make the listening experience more fun — but it also sounds a lot better than I expected a set in this price range to sound.

It’s the design of the set that has me concerned, and it’s the only thing holding me back from recommending the set outright.

If you think you can live with the design, I’d say go for the CX150 BT. You won’t be disappointed. If not, maybe just cross your fingers and hope that v2.0 is more sensibly designed.