The discovery marks the first time that an object as small as a comet has been detected using transit photometry.

Scientists have detected the dusty tails of six exocomets — comets outside our solar system — orbiting a faint star 800 light years from Earth. 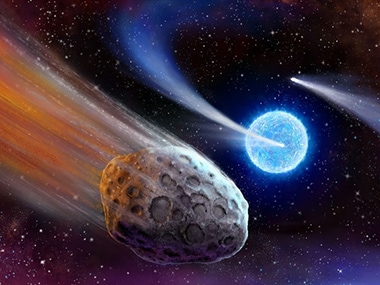 These cosmic balls of ice and dust, which travelled about 160,934 kms per hour before they ultimately vapourised, are some of the smallest objects yet found outside our own solar system, according to a study published in the journal Monthly Notices of the Royal Astronomical Society.

"It's pretty impressive to be able to see something so small, so far away," said Saul Rappaport, Professor Emeritus of Physics at Massachusetts Institute of Technology (MIT) Kavli Institute for Astrophysics and Space Research.

The discovery marks the first time that an object as small as a comet has been detected using transit photometry, a technique by which astronomers observe a star's light for telltale dips in intensity.

Such dips signal potential transits, or crossings of planets or other objects in front of a star, which momentarily block a small fraction of its light.

In the case of this new detection, the researchers were able to pick out the comet's tail, or trail of gas and dust, which blocked about one-tenth of 1 percent of the star's light as the comet streaked by.

"It's amazing that something several orders of magnitude smaller than the Earth can be detected just by the fact that it's emitting a lot of debris," Rappaport said.

The detection was made using data from NASA's Kepler Space Telescope, a stellar observatory that was launched into space in 2009.