Satya Nadella, who will be in India on 6 November to 7 November, will visit Hyderabad and Delhi .

Satya Nadella, the India-born CEO of tech giant Microsoft, will be in India next week on a two-day visit to promote his book Hit Refresh. 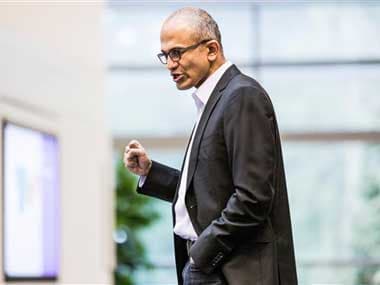 Nadella, who will be in India on 6 November to 7 November, will visit Hyderabad and Delhi and engage with government officials, industry leaders, students, and academia among other stakeholders, a Microsoft spokesperson told PTI.

"The two-day trip is focused on the book. His (Nadella) engagements include meetings with customers and industry leaders across sectors, union government and employees," the spokesperson added.

The company has also lined up a public event on the book with a diverse audience comprising students, academia, startups, and community influencers.

Hyderabad-born Nadella, who took over as Microsoft CEO in February 2014, has chronicled his personal journey, the ongoing transformation at the Redmond-based company and the wave of technological changes in his book Hit Refresh that was launched in September.

The book carries a foreword by Microsoft co-founder Bill Gates. It will also be available in three Indian languages, Hindi, Telugu, and Tamil, later this month. All proceeds from the book will go to Microsoft Philanthropies