The figure accounts for 46 percent of combined shipments that is nine percentage points down from the same period a year earlier, the report said. 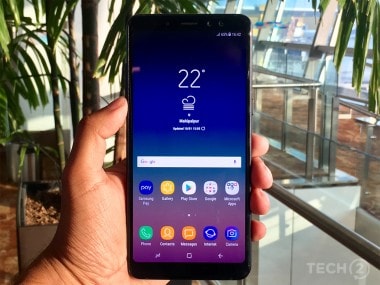 The Samsung Galaxy A8 Plus will be sold exclusively on Amazon.I mage: tech2/ Shomik Sen Bhattacharjee

According to the report by industry tracker Strategy Analytics, the South Korean tech giant shipped 24 million units in the local market during the fourth quarter of 2017, reports Yonhap news agency.

The figure accounts for 46 percent of combined shipments that is nine percentage points down from the same period a year earlier, the report said.

Apple, meanwhile, sold 15 million units of its iPhones in the same quarter, with its market share reaching a record high 28.3 percent.

The figure for the iPhone is 3.3 percentage points up from the same period a year earlier, Strategy Analytics said.

Samsung has been moving to maintain its market share through budget models.

The industry tracker said there was robust demand for the iPhone X, though global iPhone volumes have been on the decline on an annual basis for five of the past eight quarters.