The Samsung Gear Sport and Fit2 Pro are targeted specifically for those who take fitness and exercising seriously.

Samsung today unveiled the Gear Sport smartwatch and Gear Fit2 Pro for the Indian audience on 29 November. It is quite clear that both these devices are targeted towards a niche set of users who are inclined towards sports and fitness. That doesn’t mean that regular users won't find these devices useful. Both of the devices are quite appealing to look at (in my opinion) and are packed with a ton of features. Both the Gear Sport and Fit2 Pro had earlier been unveiled at the IFA event in 2017. I got a chance to test the devices first hand and here are my first impressions for both the Samsung Gear Sport and Gear Fit2 Pro. As the main attraction is the Gear Sport these impressions are directed towards it rather than the Fit2 Pro.

Holding the device for the first time, both devices felt quite premium. The watch itself has a good build quality and Samsung has claimed that the Gear Sport has military-level durability.  However, the Gear Sports’ rotating bezel interface has made the experience of the device immensely enjoyable.

The bezel is far more effective at navigating than the touch screen interface of the watch and the subtle clicks made while rotating gives the bezel a soothing touch. 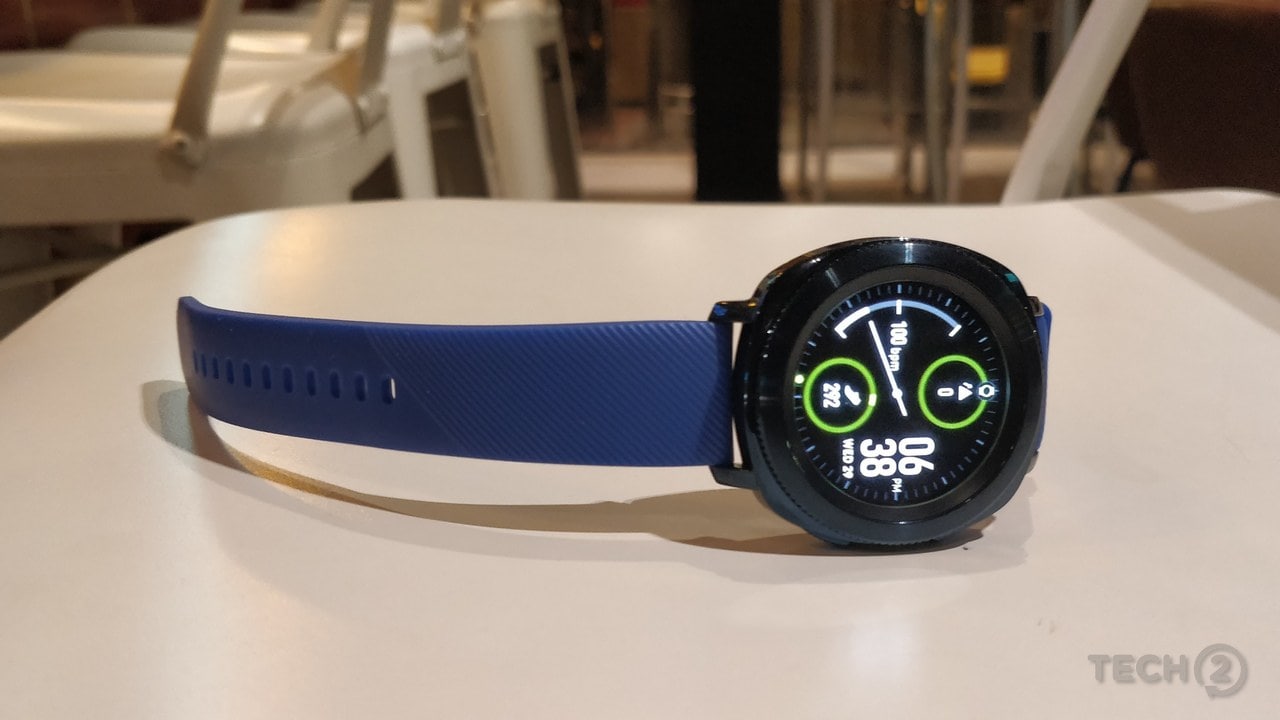 The design and build quality of the bezel and the strap feels premium.

To turn the screen on just twist your wrist towards your body slightly. However, quite a few times the screen did not immediately turn on when I flicked my wrist. You can always opt for an always on display in the settings menu, however it will come at the cost of a poor battery life.

The Gear Sport has a circular 1.2-inch 360x360 Super AMOLED display which is quite good to look at. The touch screen seems to work well but the small screen makes it difficult to correctly choose the required option. To be honest if you have fat fingers, you are going to have problems. Even, the rotating bezel is only meant for navigation on the smartwatch and not selecting any option. The Gear Sport features the Always On Display by Samsung

Coming to the features, the smartwatch has a heart-rate monitor and can automatically detect activities like sleeping and exercise. Along with this third party apps such as Speedo will also measure how many laps you have done while swimming. The Gear Sport is pretty much water resistant and can be used even 50 meters under water. There is also a barometer and altimeter built-in which is pretty nifty I’d say. The device has a 200 mAh battery, which the company has claimed to last for over four days on stand by mode. 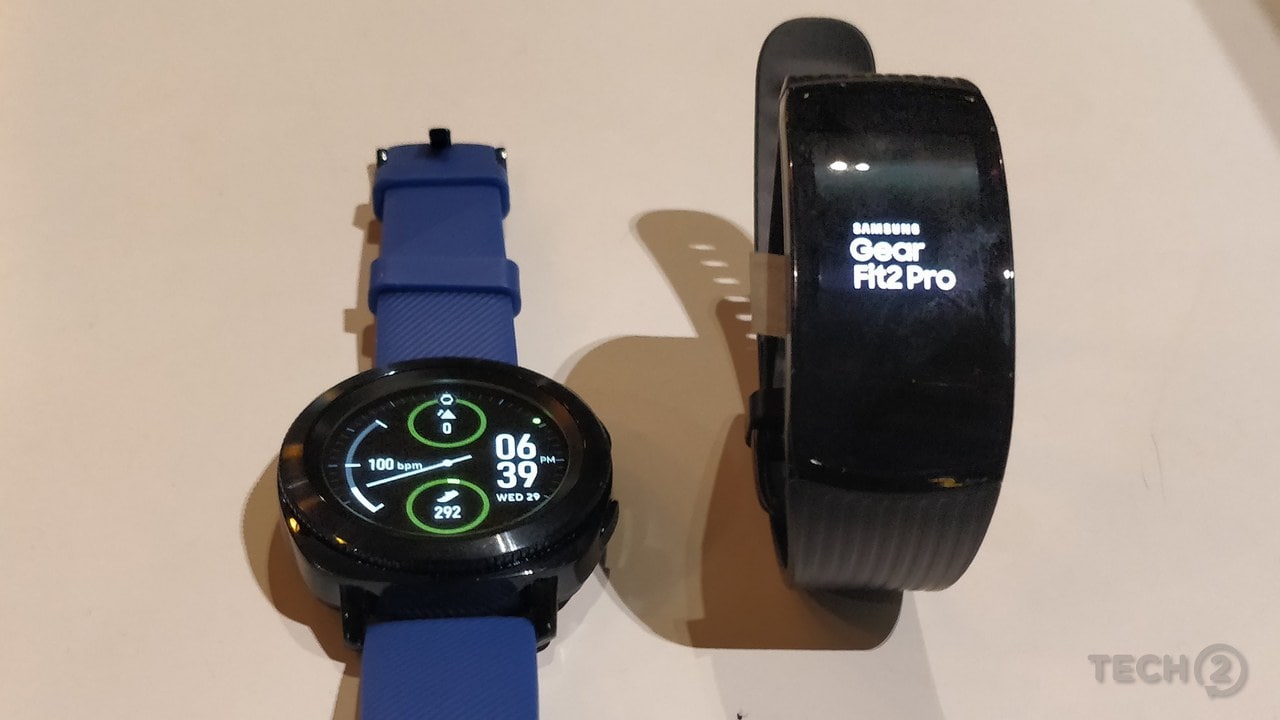 The Gear Sport packs in some extras over the Fit2 Pro

One interesting feature with the Gear Sport is that it has NFC capabilities. This means that the device can be used for making payments via Samsung Pay. However, before that the device needs to be paired using Bluetooth with a Samsung smartphone. Based on the limited time with the device I found that it could play Music when paired with a headset, track your movement with its inbuilt GPS, give you fitness motivation for your daily exercise routine and lots more. Basically any fitness freak would definitely want to get their hands on this smartwatch.

The Fit2 Pro is not that much different than the Gear Sport. Both of them have the same fitness tracking features like calorie counter, heart beat monitor, water resistance for up to 50 meters, barometer, fitness motivation, GPS and a music player. However, design wise the device has a rectangular 1.5 inch curved Super AMOLED touchscreen display. The Fit2 also runs on the Tizen OS and has 4 GB of internal storage. However it has 512 MB RAM, which is slightly less than the Gear Sport. Other differences include lack of NFC and no altimeter. It also does not have the Always On Display of the Gear Sport nor does it have the wireless charging. Instead it is charged using a chord and adaptor provided within the box

Apart from that there is no difference between the two devices. Both serve the same identical purpose of giving additional resources for those who take their fitness seriously

Both devices feel pretty great and serve the fitness purpose that Samsung has targeted with these devices. So in the end everything comes down to the price. The Gear Sport has been priced at Rs 22,999 and the Fit2 Pro has a price tag of Rs 13,590. 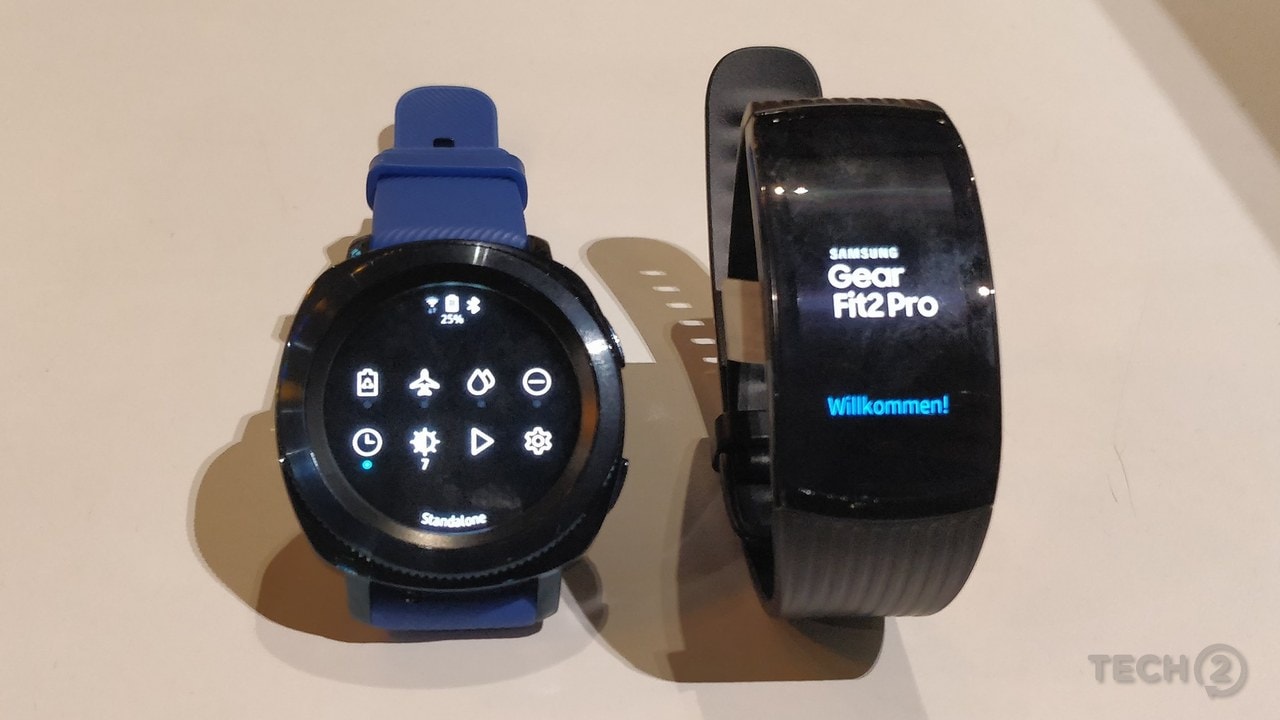 The differences in price come at the cost of features.

Both devices have a similar set of fitness tracking features. But the Gear Sport edges out with the NFC ability, wireless charging and its rotating bezel. Is it worth paying the extra 10,000 on the Gear Sport for the above mentioned differences? Depends a lot on what you plan on using the device for. Stay tuned for our full comprehensive review which will shed more light on the matter.