The Galaxy Z Flip will be available for pre-order starting 21 February and will go on its first sale on 26 February.

Samsung Galaxy Z Flip is the first clamshell design foldable phone that I’ve managed to get my grubby hands on, and I have to say, I felt super greedy when I looked at that mirror purple variant. I wanted to flick that flipping’ phone and run. Morals be damned!

In India, the Galaxy Z Flip has been announced at Rs 1,09,999, which one would naturally call expensive. However, at a time where an iPhone costs close to a lakh and a half, and to be honest isn’t as cool and doesn’t feel as Star Trek-y, this seems like great pricing.

I got to use the Galaxy Z Flip for about 40 minutes, and I think I am in love. I know I’m sounding like an ad right now, but I swear these are my initial impressions from using that phone. 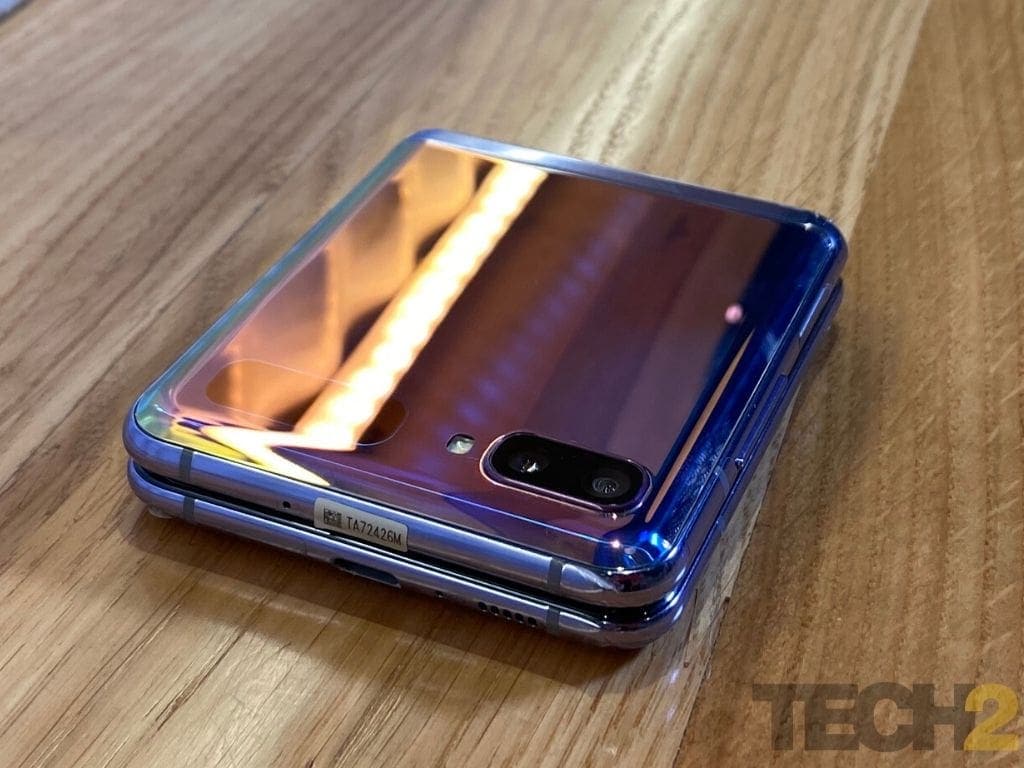 The flip phone had me flipping

As a 27-year-old, the Galaxy Z Flip, reminds me of the time when nothing was cooler than a flip phone. Yet, when I used the phone, the device felt expensive, and, if I haven’t mentioned it already, rather futuristic. I mean, which other phone can go from a monster 6.7-inch display to something tiny enough to slip into the tiny pockets we women have to live with?

The phone is super compact when folded and easily fits in the palm of my hand (which is quite tiny, if I might add). Though I have to admit, the phone’s a proper smudge magnet and you wouldn’t want to palm it.

The phone has a glass body and Samsung even includes some dedicated literature in the phone’s box which guides a user on how to avoid contracting too many scratches on the phone. The display and design add to the phone’s premium-ness

The Galaxy Z Flip, when unfolded, has a 6.7-inch FHD+ AMOLED display, which is bright and displays crisp colours.

After the Galaxy Fold fiasco, like everyone else, I was a little skeptical of the concept actually working. I was especially focused on the hinge, the fold, and was looking for cracks from the moment I got my hands on the device. But the display seemed seamless. Well, almost. When you swipe your finger along the centre where the display folds, you can feel a little dent.

The dent doesn’t do anything to your viewing experience, and you can barely notice it when you watch something on the device. You would only know about it when you swipe your finger on the part where the display folds.

Samsung's second foldable display smartphone – #GalaxyZFlip – is in India and is priced at Rs 1,09,999. @nandiniwhy brings you a closer look at the phone. @SamsungIndia @SamsungMobile pic.twitter.com/ADNg0chLk6 I also spoke to Samsung at the briefing about how confident they are about the display and the hinge this time, and they claim that with the Galaxy Z Flip, even if you fold and unfold the device 100 times a day, it can comfortably last you five years.

Besides that, I found the display really beautiful. If you fold the phone at 90 degrees, you can actually use the phone in a split-screen mode. It sits like a mini laptop in front of you. Similar to my old-old Sony Walkman phone, the Galaxy Z Flip also has a secondary screen that you see when the phone is folded. This, however, is a much superior 1.1-inch Super AMOLED display that shows you information like time, date, calls, alarm, etc. You can swipe on it to see any missed call alerts, message alerts, and other such notifications.

I also found a very cool use of that mini display. If you double-tap the power button when the phone is folded, you can use the secondary screen as a viewfinder to click pictures from the dual rear cameras.

Speaking of cameras, the ones I clicked with the phone turned out quite nice, featuring vibrant colours, adequate sharpness and decent saturation. I’ll give you a proper verdict when I really get to use the phone though.

Performance is great, so far

Although I used the Galaxy Z Flip quite briefly, the 40 minutes I spent with the phone were quite all right. Even with the phone slightly bent, I was easily able to swipe through the screen. When using at different angles, the phone immediately changes modes. App switching worked quite smoothly too.

I also played a few videos on the phone. The audio output was very clear and decently loud. Although, you will have to opt for a Bluetooth headset with the phone, since it’s missing the 3.5 mm jack.

The phone has a 3,300 mAh battery and supports wireless charging. The Galaxy Z Flip is also the first foldable phone to offer dual-SIM support. Like iPhones, the second SIM is an e-SIM, which in India, is offered by Airtel and Reliance Jio.

What can I say, this phone made quite an impression on me and I’m certainly looking forward to trying it out.