Samsung Galaxy S9 and S9 Plus pricing in India leaked via an alleged official document; expected to start from Rs 62,500 onwards

There is no pricing for the 128 GB variants of the Galaxy S9 and S9 Plus so it is likely that it will not make its way to the Indian market.

Samsung is planning to launch its latest flagships, the Samsung Galaxy S9 and the Galaxy S9 Plus in the Indian market next month. As previously reported, the company has started taking pre-orders for the devices with plans to launch the device sometime in March.

Samsung India has not revealed the launch date or the launch price for the devices in India, whereas internationally it will start selling on 16 March. However, a post on Reddit has allegedly captured the pricing of all the variants of Galaxy S9 and S9 Plus. The post links to an image of a digital document opened on a computer.

There is no pricing for the 128 GB variant. Probably hinting that it will not be making its way to the Indian market. S9 and S9 Plus are both powered by Qualcomm Snapdragon 845 SoC and Samsung’s in-house Exynos 9810 (market-dependent). Indian markets generally get the Exynos variants. 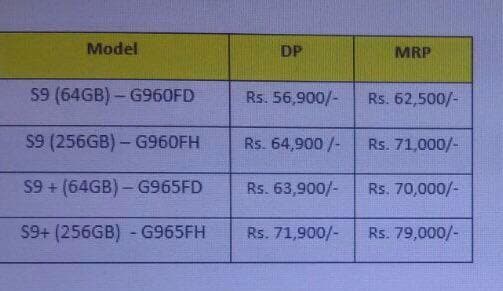 The screen size will remain same for both the devices with 5.8-inch and 6.2-inch for the S9 and S9 Plus respectively. This time users will get an option to choose from 64 GB, 128 GB and 256 GB storage variants while buying any of the two devices.

The most significant improvement for the S9 line-up is expected to be the camera with S9 and S9 Plus being the first devices from the Galaxy S-series to pack a variable aperture from an impressive f/1.5 for low-light conditions to f/2.4 for sharper images.

The pricing has also been confirmed by another report by 91mobiles which claims that it “obtained an official document” with prices in the market.

We shall wait for the official word from Samsung. In the meantime, be sure to follow our MWC 2018 page, Twitter and Facebook channels for LIVE updates from the show floor.