Samsung Galaxy Buds Pro review: Not the best TWS earbuds but a great performer at its price

The Samsung Galaxy Buds Pro don’t really win at anything, but they create a good balance of sound quality, Active Noise Cancellation (ANC), comfort and pocketability.

The Samsung Galaxy Buds Pro don’t really win at anything, but they create a good balance of sound quality, Active Noise Cancellation (ANC), comfort and pocketability. But before we talk about how the Buds Pro strike that balance, I’d like to digress and address what makes these earbuds ‘Pro’.

The Pro essentially denotes ANC. Samsung claims the Galaxy Buds Pro can block out 99 percent – or a great deal – of external background noise at 118.43 Hz. To be honest, that is Greek to me, but in practice, the earbuds cut out a decent amount of outside noise; decent being the operative word. 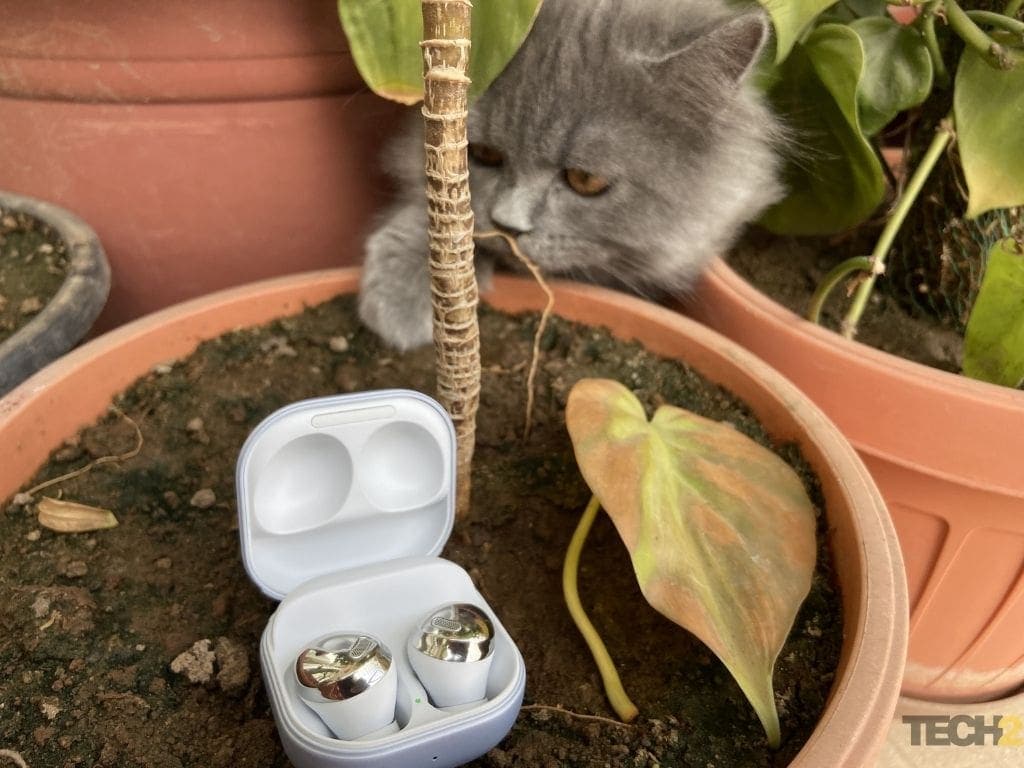 While testing the Galaxy Buds Pro, I parallelly used the Apple AirPods Pro to test the ANC, and the former definitely let in more background noise as compared to the latter. However, if you turn on the ANC on the Galaxy Buds app, and play some music, you can (to an extent) block out the outside world with the Buds Pro.

The Galaxy Buds Pro also get a Voice Detect feature, which I think is brilliant. The feature basically automatically lowers the volume of whatever you are listening to and switches the noise cancellation mode to ambient mode (regardless of the ANC setting at the time) the moment you start talking. The Buds Pro also let you choose the duration for which the voice detect feature should remain active every time your voice is detected, such as five or 10 seconds. However, if you like to sing along to music you’re listening to, I suggest you turn off Voice Detect. Ambient Sound is not a feature new to TWS earbuds in general or the Samsung Galaxy Buds series, in particular. The Galaxy Buds+ too, offered this feature. However, I noticed some remarkable improvements made to it with the Buds Pro. Unlike on the Buds+, in which Ambient Sound was always tinny and robotic, on the Buds Pro, the sound is much more natural.

This Ambient Sound feature comes in really handy when you are out and someone asks you a question, or if you have to listen to an announcement, or even if you want to listen in on someone’s conversation. What? I just said it. You are the one who listens in!

If you haven’t used the Galaxy Buds Live, you will notice a lot of improvement in the design of the Buds Pro over the Buds+. The case of the Buds Pro is a lot more pocketable. It’s like a tiny pebble with a matte finish. You can easily open and shut the case with one hand.

As for the design of the Buds Pro itself, there’s again considerable improvement, and none of the Samsung Galaxy Buds in the past have been this comfortable. Samsung Galaxy Buds Pro sit snuggly in your ear and i my time reviewing it I never had to re-adjust the bud in my ear. Image: tech2/Nandini Yadav

The Galaxy Buds Pro combine a glossy and matte finish. It has a beautiful blend of the in-ear design of the Buds+, and silicon tips and some style cues derived from the open-air Buds Live. The Buds Pro fit snugly into the ears and don’t protrude as much as the previous Buds did.

Samsung says the new design of the Buds Pro also helps reduce contact between the Buds and the ears, and reduces the clogged-up feeling (which I especially noticed on the Galaxy Buds+). However, for people who like to wear their earbuds to bed or lie down on a side to read a book, the Buds Pro can feel really uncomfortable.

I only received the Galaxy Buds Pro three days ago. With an average music listening time of four to five hours, along with answering calls, with the ANC on, the Buds’ battery is going strong. At the time of writing the story, I still have 90 percent battery in my buds and 22 percent left in the case. This means, on an average, the Buds Pro will last me four days with ANC on. Naturally, using the Buds without ANC will prolong battery life.

The Galaxy Buds Pro charge via a Type-C cable and support fast charging as well as wireless charging (the latter takes longer to fuel the earbuds, of course). The Samsung Galaxy Buds Pro come with an IPX7 rating. This is the highest standard of water resistance in any Galaxy Buds ever. In theory, the IPX7 rating means that the earbuds can survive a soft water submersion in up to 1 meter deep water for a maximum of 30 minutes. So I set out to test the theory. I put the earbuds on, and I hit the shower.
(If a pair of earbuds are waterproof I’d love to use them in shower. Wouldn’t you?)

After a 15 minutes shower, the earbuds worked just fine, however:

Overall, the Galaxy Buds Pro passed the water test, however, they weren’t a success using in the shower. I wonder how usable the earbuds would be while swimming.

The only department where the Galaxy Buds Pro really disappointed me was Connectivity. 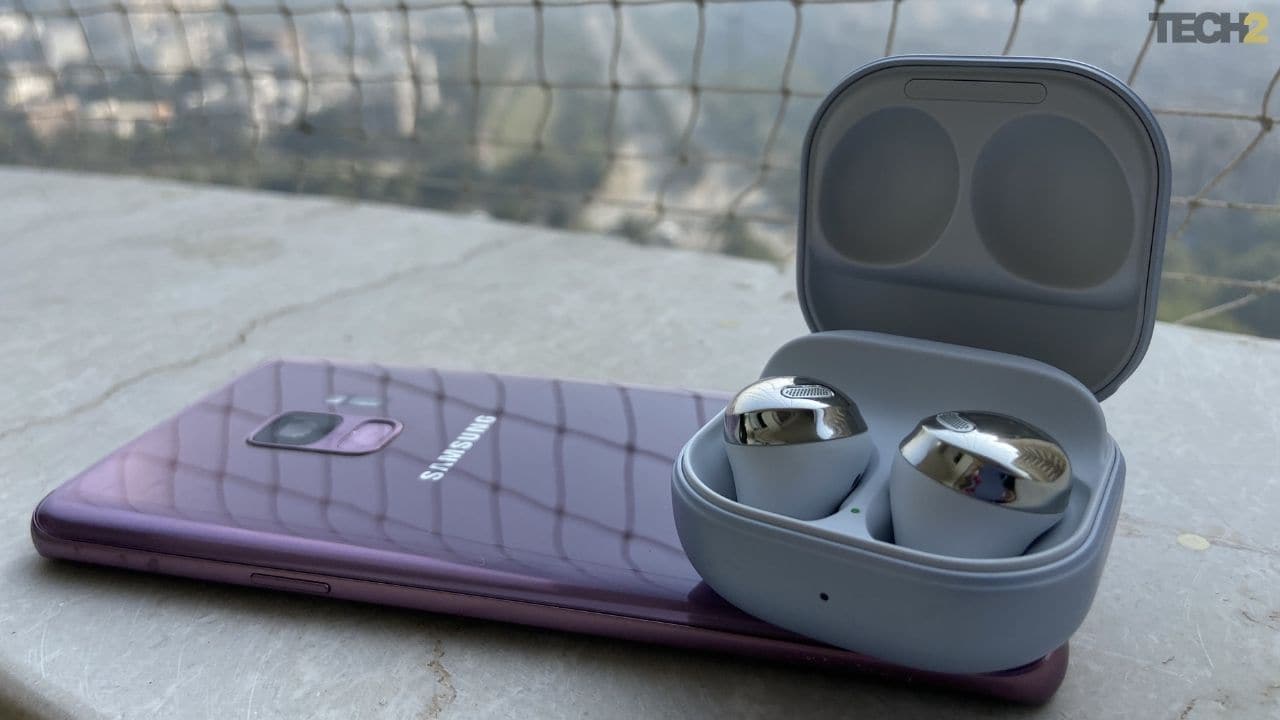 Before I tell you why, here’s what you should know: I use an iPhone 11 as my primary device. And being an iPhone user, I understand the concept of siloed products. However, I have reviewed Galaxy Buds in the past and I prefer reviewing earbuds using my primary device, because it gives me the real hang of using that product in my day-to-day life.

So the standard way to do it is, that I use the Galaxy Buds app on iOS to connect the earbuds. While you can just simply sync the earbuds via Bluetooth, when it comes to the Galaxy Buds, you can miss out on a lot of the cool stuff like Ambient Sound, Voice Detect, and ANC, if you don’t use the app, which lets you fiddle with the settings. Besides that, you would be unable to run the OTA updates for the earbuds aimed at making improvements and fixes to the product.

Unfortunately, this time, even after multiple attempts, I was unable to sync the Galaxy Buds Pro to the Galaxy Buds iOS app. Despite uninstalling and reinstalling the app, the earbuds weren’t detected on the app. However, on a Samsung Galaxy S9, using the Galaxy Wear app, the Buds Pro synced seamlessly.

I reached out to Samsung regarding the issue and I was told that no other reviewers were facing the issue, and I was sent another pair of earbuds. However, after that didn’t sync either, I figured that the Galaxy Buds Pro are not compatible with the Galaxy Buds app on iOS and can only be connected via Bluetooth.

Samsung Galaxy Buds Pro: Should you buy it?

As mentioned at the beginning of the review, the Samsung Galaxy Buds Pro are the best earbuds by Samsung so far. The Buds Pro are surely not the best TWS earbuds out there (looking at the Apple AirPods Pro, Bose Sports Earbuds, and Sony 1000XM4), but at Rs 16,000, they definitely offer a great overall performance, and certainly won’t disappoint.

However, do keep in mind the Galaxy Buds Pro make way more sense for you if you already use a Samsung smartphone or a tablet. To be able to use the earbuds at their best, the Samsung ecosystem really matters. Besides the issue I faced while syncing the Buds Pro to the Galaxy Buds app on iOS, I also noticed that features such as 3D audio and automatic device switching only work when you are using the Buds Pro with a Samsung device.