Sachin Saga VR Review: An enticing VR experience for kids but controller could be better

Sachin Saga VR Game and headset will be worthwhile options for young ones who are still to experience the wonders of VR.

Virtual Reality or VR is something that has not picked up ostentatiously in India or at least not at the pace you would expect. Headsets from recognised names such as Oculus and HTC are too expensive for the general user to even consider it, let alone buy it. However, the general experience of what VR is all about can be seen via Google Cardboard, which is cheap and uses your phone to deliver the VR experience. In essence, that is what the Sachin Saga VR headset is. Coming with a price tag of Rs 1,999, it is a Google Cardboard alternative but with a focus on cricket, more specifically Sachin Tendulkar.

So in honour of the God of Cricket's birthday, let's a take a detailed look into the VR headset, developed by JetSynthesys, chronicling his most famous innings. 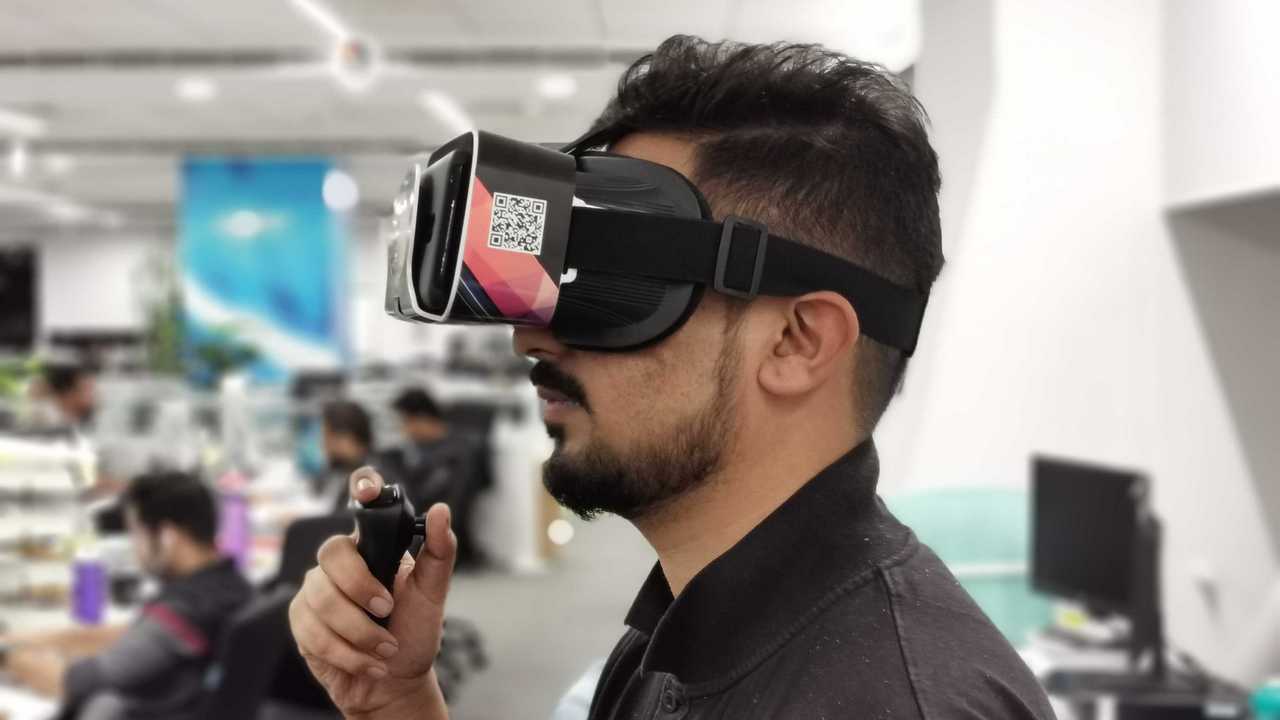 The headset has a plastic build and foam housing for your smartphone. I used my OnePlus 6T as the device for viewing on the headset and it fit perfectly. I assume that smartphones smaller than it will also be able to fit comfortably. The headset is not flimsy by any standards and the phone is still in place even if I shake my head a little vigorously. A bit of padding between the headset and your face should make for a pleasant viewing experience without the edges jutting. With Sachin's face emblazoned right in front where the phone is housed, the headset cannot be mistaken for anything other than what it actually is.

The construction of the VR headset is quite good.

There is also a joystick provided with the headset which seems to be poorly made. For starters, the remote runs on AAA batteries. I would've liked an internal battery being charged via a USB cable. The controller, made of plastic, generally feels a bit cheap in the hand although to be fair this is not a very premium product. There's a joystick, six buttons on the top and one on the bottom present on the controller.

The game itself chronicles the numerous number of innings that Sachin has played for India over the years. To get started one has to download the Sachin Saga VR app from the Play Store on your phone, open the app and put your phone on the headset.

The headset fits quite well and so does the phone.

For someone who has experienced VR before or used VR products, the learning curve isn't that steep. A small calibration is required before you begin so that the game can get a centre of focus. After that, you are ready to play. However, for someone who hasn't used VR before, the experience can be a bit overwhelming and also a little hard to understand.

Coming to the gameplay itself, there is a career mode, quick play mode and multiplayer mode. The career mode entails a player through 50 of Sachin's best career knocks. In Quick match, you get to play 2-, 5- or 10-over matches at day or night with your favourite team amongst eight options. Multiplayer mode means that you play with other people who have bought the VR headset.

Inside the game, the options are understandably limited. First of all, there is no option to bowl. You can only bat and in the case of the career mode, you can only bat with Sachin. Even if Sachin takes one run he will magically keep the strike.

The controller is made of plastic and flimsy looking.

Scoring runs is relatively simple to understand. The bowler bowls his delivery and we see where it bounces. Judging from that we have to push the joystick in the direction of which we need to score. We can score 1, 2, 3 and 4 runs. I have not been able to hit a six up until now but I believe that an option for that will be available as well. To run one needs to just flick the joystick forward.

There are two viewing angles for the user. One is over the shoulder perspective. Here you can see the batsman and the game from a third person perspective. It feels like a traditional cricket game in which you can have a 360-degree view of the field and enjoy the visuals. The helmet cam gives the user a first-person perspective of the action wherein if you take a run you can see yourself running while you look around at where the ball has gone.

It is an overall great package for children.

The Sachin Saga VR is a very simple, immersive and fun-to-play game. For the younger audiences, aged 8-15 this seems to be an enticing device to chronicle the various groundbreaking innings produced by Little Master himself. On the downside, the flimsy looking controller coming with the not-so-cheap Rs 1,999 headset seems prone to damage and is not exactly ideal for long term usage.

In any case, the Sachin Saga VR Game and headset will be worthwhile options for young ones who are still to experience the wonders of VR. Seasoned gamers should stay away.