The app is pretty well received on the application stores, with a 4.5 rating on the App Store, and a rating of 4.2 or the Play Store.

Roposo is a made in India social network that is a bit like Snapchat, a bit like Instagram, but is different because the content available on the platform is local for the most part. While allowing users to showcase their creations and talent, the focus is weighted more towards the content rather than the users. This means that you can just swipe through interesting pictures and videos, organised in channels, and you can follow the specific accounts when you come across content that you like. Roposo is currently running a talent hunt event on its platform.

One of the best things is that you fire up the app and it instantly starts playing back the content. This is actually a zero button interface, where you do not have to do anything but sit back and watch as the content streams by. Each image is shown for a certain duration, and the videos skip to the next piece of content as soon as they finish. If the user is bothered, they can swipe what is displayed, react to it, post a comment, or follow the particular account. Entire clusters of related accounts are displayed at once in a channel, allowing users to follow a whole bunch of people at once. '

Roposo has thought through to make an easy, laidback experience that allows users to discover new things without having to first hunt down the individuals that they want to follow, and the interface is tuned to allow the content creators to be easily discovered at the same time. The content takes up the entire screen, with no framing, so everything in the application defers to the content. All the other controls and options are overlaid on the content. The app is pretty well received on the application stores, with a 4.5 rating on the App Store, and a rating of 4.2 or the Play Store. 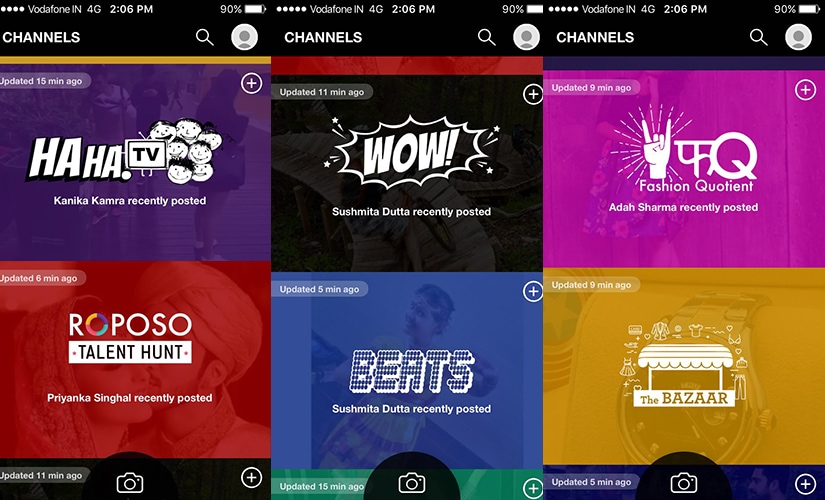 The technology channel is called Digi, and this is one of the channels that really displays the uniqueness of Roposo. While there are the usual eye candy posts of impossibly expensive devices, smartphone hacks and snaps of the latest gadgets in the market, a large portion of the content is made up of weird, wonderful, experimental and innovative technology products at work. Hoverbikes, robots, explosive sensing rings, flexible displays, smartphone controlled paper airplanes and devices to iron clothes are the type of content you are likely to encounter in the Digi channel. It is the kind of stuff that you can expect to find on a promising Kickstarter. 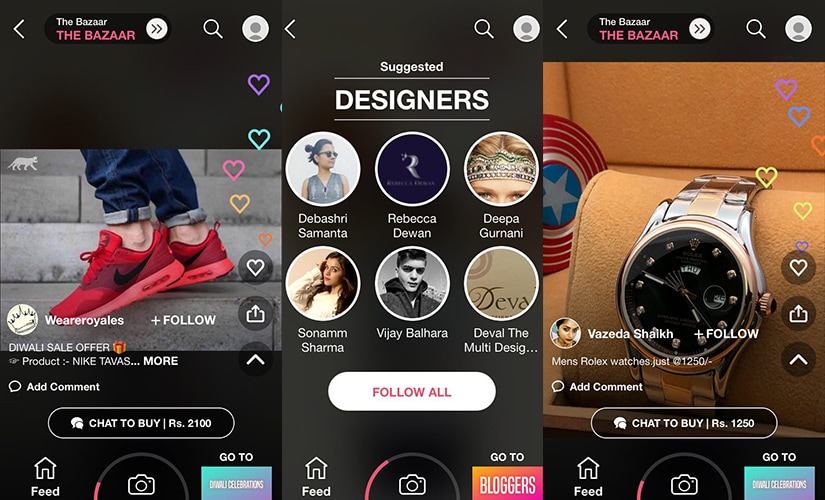 There is an integrated Bazaar, and users are presented with groups of accounts related by theme to follow at once.

Snapchat and Instagram have in excess of 200 million users who are active every day. This is far more than the 4.5 million users that Roposo has in total. However, that actually works for the social network, because of two reasons. The user base is dedicated, which means the quality of content is relatively on the higher side, and there are a lot fewer fake and spammy profiles. This means that for the end user, there is a steady stream of fresh, local Indian content.

The relatively smaller network is finding its own niche, and is growing into something that is substantially different from Snapchat, Instagram or any other social network out there. The platform is also great for social media and digital influencers because of the possibility of capturing a large audience in an incipient social network. In terms of sharing content, that is easy too. There is a camera app right at the bottom of the screen that can be used to share photos or videos instantly. The creations can be enhanced with a selection of stickers that have an Indian flavor and are animated. Apart from the stickers, there are filters known as effects that can be slapped on and fine tuned. Users can also add music to their creations before sharing.

Roposo is currently organising a talent hunt. Users just have to register to the platform, create a post with #RoposoTalentHunt and attract votes. The categories include singing, dancing, music, acting, fashion, photography, fitness, cooking, comedy and travel, among others. Even if your talent is so unique that it does not come in any of these categories, Roposo has a catch all bucket known as "Other Talent". There is a total of Rs 7,00,000 up for grabs, with weekly prizes, a Rs 30,000 prizes for individual categories, as well as a Rs 1,00,000 grand prize. Roposo is a free app available on Android and iOS.