Review roundup: Z10 is nice but is it too late for BlackBerry?

BlackBerry, formerly known as Research in Motion (RIM) limited has launched its latest device the BlackBerry Z10 in an attempt to get back into the smartphone race. BlackBerry has a witnessed steady decline as far as its sales are concerned thanks to the rise of Apple's iPhone and Google's Android device.

The BlackBerry Z10 is the device that will hit the stores first. This is a full touch-screen smartphone with a 4.2-inch LCD screen with a 1280 x 768 screen resolution and that comes to 356 pixel per inch. The phone is powered by a dual-core CPU clocked to 1.5GHz with 2GB RAM. It has 16 GB mass memory but this can be increased with a microSD card. It has an eight megapixel rear camera with 1080 pixel video-recording capacity and a two megapixel camera with 720 pixel video-recording. The smartphone also has Wi-Fi, GPS, Bluetooth 4.0, NFC support.

As far as the reviews are concerned, while there's no denying that BlackBerry is trying hard with its new device, the question on everyone's mind is whether its actually offering users anything different. And the answer seems to be an overwhelming no, across the board.

According to Walt Mossberg at AllThingsD, while the smartphone is fine, the question is always going to be about apps.

Overall, it worked fine in my tests, but I found it a work in progress... it will launch with just a fraction of the apps available from its competitors, and is missing some very popular titles. It also lacks its own cloud-based ecosystem for storing and sharing files, like Apple's iCloud or Google Drive. And there are other missing or lagging features.

Mossberg also notes that the browser for BlackBerry is noticeably slower than the standard Apple and Android browser, even on a fast Wi-Fi network. 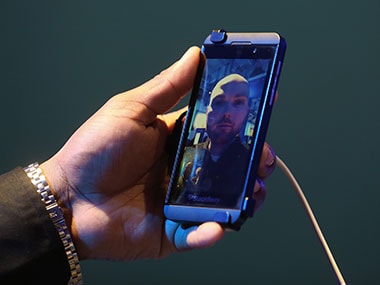 The Video calling feature is shown on the BlackBerry Z10. Getty Images

The Verge's review, gives it a good reviews as far as the BlackBerry 10 OS performance is concerned, calling it snappy and responsive.

Reviewer, Joshua Topolsky notes that zipping around from one app to another, jumping into and out of messages, and managing content on the device worked as expected with few hiccups. There were times when an app or message would seem to stall on loading, but those were few and far between...

As far as BlackBerry's Social Hub is concerned he says, it doesn't always represent your overall lists of notifications or messages - when you hear an SMS notification and go to check it out, you're greeted with whatever you were doing last.

But the review also notes that there are better brands of smartphones around and the BlackBerry Z10 is a little too late. The question for users will always be Why Now when it comes to the Z10, he adds.

TechCrunch's Darrell Etherington, praises BBM and writes that BBM is still the single best messaging platform integrated into a mobile OS, easily beating iMessage in terms of reliability, but voice and video are huge steps towards modernizing the service, and very welcome additions.

He also compares the display of the BB Z10 to the iPhone 5 and states that Text renders very crisply, and the screen has very good touch response. While the phone is good, he also concludes by saying that he'd be hard-pressed to say there's anything here that will necessarily convince an Android-loving BlackBerry convert to come back to the platform.

Battery for the new Z10 is an issue and it appears that reviewers have noted the lack of battery life as a serious down-point.

The CNET reviewpoints out that the, Z10's unintuitive gesture paradigm creates a learning curve, and a long list of OS inefficiencies and omissions sour the experience. The bare-bones maps app and a deficit of camera features are two examples.

The review notes that the camera has no HDR, no ISO settings, no grid, no geotagging, no option to drop resolution, and -- one of its worst offenses in my opinion -- no way to silence the shutter's loud clacking.

The Engadget review sums it up in the best way possible. BlackBerry's BlackBerry Z10 is genuinely a pretty nice phone. But, tragically, there's really nothing to love. Nothing in the Z10 stands out as class-leading.

From the reviews it appears to be that while most reviewers found BlackBerry Z10 to be a sturdy and decent phone, the truth is that it doesn't appear to be anything new. Rather it looks like an Android and iOS mash-up which might not appeal to a lot of consumers.

Poco X3 Pro Review: A sportscar engine in the body of a minivan

Mortal Kombat movie review: A toothless bore of an action film, with a scant side of fun moments