The conditions created in the lab were similar to ice giants in the outer solar system such as Uranus and Neptune.

An international team of researchers from universities around the world have observed the formation of diamond rain in lab conditions. The conditions created in the lab were similar to ice giants in the outer solar system such as Uranus and Neptune. Scientists were able to observe the formation of diamond rain for the first time, in extremely high pressure conditions. It has previously been hypothesised that such rain occours more than 8,000 kilometers beneath the surface of the ice giants. 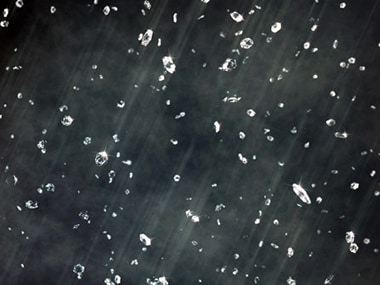 Dominik Kraus, lead author of the study says, "Previously, researchers could only assume that the diamonds had formed. When I saw the results of this latest experiment, it was one of the best moments of my scientific career."

Both Uranus and Neptune are believed to have dense solid cores surrounded by ice made up of hydrogen molecules connected to lighter elements such as oxygen, nitrogen and carbon. The researchers simulated these high pressure conditions in a lab by inducing shock waves in plastic using an intense optical laser. Almost every carbon particle in the plastic was converted into a nanodiamond. The diamonds are expected to be much bigger in the interiors of the gas giants, potentially forming a thick diamond crust around the solid core over millions of years.