Stanford researchers have developed a new method for identifying lithium deposits, which promises to diversify the available sources of the metal.

Lithium is an energy critical resource that is used in batteries to power everything from consumer electronics, to homes, to electric vehicles. Most of the lithium used in the lithium-ion batteries are sourced from Chile or Australia. Stanford researchers have now developed a new method for identifying lithium deposits, which promises to diversify the available sources of the valuable metal. 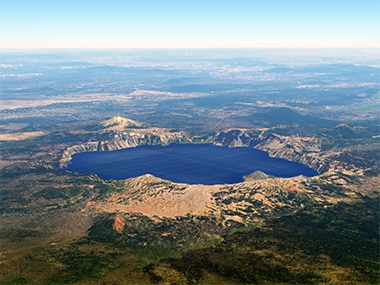 The Lake Crater in Oregon, a lake formed in the caldera of a supervolcano. Image: Google Maps.

Supervolcano explosions spew out thousands of cubic kilometers of magma from the interior of the Earth. The cone shaped formation of the volcanoes typically collapse after such massive explosions, leading to a crater type hole in the ground known as caldera. The caldera get filled up with water over time, and over thousands of years rainfall and hot springs draw out the lithium from the volcanic deposits. The lithium accumulates in the caldera lake over time.

Gail Mahood, a co-author of the study says, "We’re going to have to use electric vehicles and large storage batteries to decrease our carbon footprint. It’s important to identify lithium resources in the U.S. so that our supply does not rely on single companies or countries in a way that makes us subject to economic or political manipulation."

The researchers compared the richness of the lithium deposits at the sites of many ancient supervolcanoes across the world. These included caldera at Kings Valley, High Rock, Hideaway Park, and Yellowstone in the Untied States, Sierra la Primavera in Mexico and Pantelleria in the Strait of Sicily. The findings indicated that the level of lithium varied widely. Viable deposits would accumalate as long as there were large quantities of magma ejected, irrespective of the concentration of the lithium in the magma.

Lithium was originally discovered in the 1800s, and is the lightest metal known. The metal was mostly used for medicinal purposes and nuclear weapons technology till the 2000s, when it was increasingly used for the batteries in consumer electronics. Volvo has committed to making electric only cars from 2019, which indicates that the demand for lithium is only going to increase in a world moving away from dependence on fossil fuels.

Nanodiamonds in lithium batteries can prevent short circuits and fires in smartphones and laptops: Study