The Indian Cricket team is expected to begin its ICC Cricket World Cup campaign against South Africa on 5 June and while the fever grips the nation, Reliance Jio's just made an incredible announcement for users.

All Jio users will be able to stream every World Cup match live, without having to shell out an extra penny. Users can choose to watch the matches live on either JioTV or Hotstar. What this essentially means is that the telecom operator is willing to pass on benefits worth Rs 365 that users would otherwise have to pay for watching the world cup matches live and free. A woman checks her mobile phone as she walks past a Reliance Jio Store. Reuters

In addition to this, Jio also announced the launch of a new version of its JioCricket Play Along game within JioTV which promises to not only engage its users during the world cup but also provide key information like scores, match schedules, results and more.

Jio has also unveiled a Cricket Season special data pack at Rs 251. This is a special pass for all cricket enthusiasts and is created to meet high data consumption in the course of watching an entire ODI match. The pack provides 102 GB high-speed Data for 51 days, which would be adequate for watching all the world cup matches. 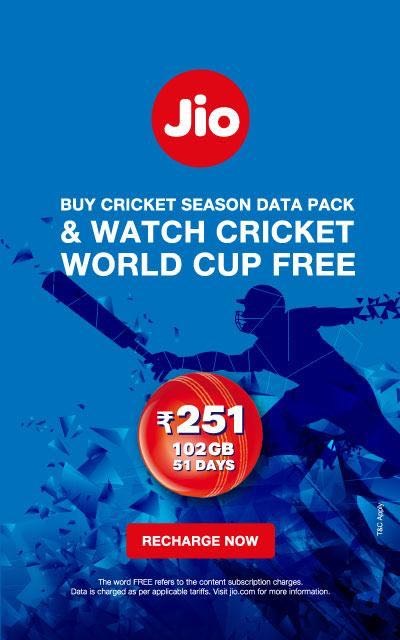 With this, cricket lovers can seamlessly stream all their matches, free on Hotstar via JioTV, without interruption or the worry of exhausting their daily quota of high-speed data.