A feature-rich 4K smart TV that offers good value for money, but upscaling lower resolution content is not its forte.

We have a new budget TV from Xiaomi, but wait! This one isn’t from its usual Mi TV series, but the first to sport Redmi branding. Rather than delving into how this is different from Mi-branded TVs, it’s simpler to view the Redmi Smart TV X55 as the next variant from the series (till there’s actually one) and look at what it has to offer and how it performs. And that’s exactly what we are going to do with the Redmi Smart TV X55.

This Redmi TV looks quite generic, with distinct glossy plastic bezels surrounding the 55-inch screen. They aren’t overly thick, but the company hasn’t bothered taking the near bezel-less route either. The bottom bezel has a tiny chin at the centre that hosts the IR receiver and power LED. The TV can be placed on a desk using the bundled plastic stands, unlike the metal ones provided with Mi’s QLED TV. Like all Xiaomi TVs, the wall mount isn’t bundled in the package, but provided at an extra cost if you need it. One interesting element here is that in order to limit wastage, the cardboard packaging can be used to make a cool looking shelf. If you’re up for a craft workshop, DIY instructions are provided. The company bundles its usual voice-enabled remote in the package, but still no AAA batteries to power it; guess it’s bad luck to bundle batteries. The remote is compact and minimal in design, with hotkeys for Netflix and Prime Video. There are still no dedicated keys for Mute, Settings or Input selection; however, since the launch of the QLED model, there is a workaround, which has been carried over for the X55. You can mute the audio by double clicking the volume down key and bring up the settings panel by keeping the PatchWall key pressed for a few seconds. The connectivity department on the Redmi X55 has an excellent spread for a budget TV. You get three HDMI 2.1 ports with support for ALLM, and one of the ports supports eARC. You also get two USB ports and a headphone out along the left edge of the rear module. The A/V inputs, optical audio out and an Ethernet port are placed along the bottom edge. The best part being, all ports are placed closer to the left edge of the TV, making them easier to access even if you choose to wall mount it, which is a smart design decision. Wireless connectivity options include Bluetooth 5.0 and dual-band Wi-Fi with support for 2.4 GHz and 5 GHz networks and a/b/g/n/ac standards. The Redmi Smart TV X55 has a 55-inch panel with an Ultra HD (4K) resolution of 3840 x 2160 pixels and a 60 Hz refresh rate. Our unit had an IPS panel, but as always, the company has used IPS as well as VA panels in the same TV series. Peak panel brightness figures haven’t been specified, but it supports all popular HDR standards such as HLG, HDR10/10+ and Dolby Vision. Like all certified Android TVs, it has Chromecast built-in and lets you cast content onto the screen from compatible apps on your phone or tablet.

It is powered by a Mediatek quad-core processor with ARM Cortex A55 cores and Mali G52 MP2 GPU. Each of the four CPU cores can go as high as 1,500 MHz. You get 2 GB RAM and 16 GB of internal storage here, a chunk of which is taken up by the Android 10 OS for TV. You are left with over 10 GB of storage for your apps and data, which is quite good. Sound output is rated at 30 Watts RMS with support for Dolby Audio and DTS Virtual: X. I couldn’t test the HDMI 2.1 capabilities of the TV, as I didn’t have a PlayStation 5 or the latest Xbox at hand during the course of my test.

The Redmi Smart TV X55 runs the latest Android 10 OS for TV with the stock user interface. The UI is the same as on most certified Android 9.0 TVs. Alternately, you also get the latest PatchWall 3.5 UI (based on Android 10). There has been a marked improvement in the user interface since version 3.0. It looks noticeably uncluttered and user-friendly. Content from different OTT platforms is elegantly presented and sorted. You can simply select the content and start playing if you are subscribed and logged into the respective platforms on this TV.

You also get access to all the input sources right there, which makes life easier for the less tech-savvy. The Netflix and Prime Video apps are preinstalled, along with a handful of Google services including Play Store, YouTube, etc. The default Android UI as well as PatchWall are both snappy, and there was hardly any lag. As I mentioned earlier, you can bring up the quick settings menu by keeping the PatchWall key pressed for a few seconds. This works across all apps and input sources, and lets you adjust picture and sound on the fly – a big plus. One new addition is the Mi Home app that lets you control compatible smart devices in the house.

Picture quality of the Redmi Smart TV X55 is quite good, especially when watching 4K content. The colours look vibrant, and the contrast is quite good. The 4K panel can get reasonably bright, and details of dark areas in high contrast scenes in our test videos were clearly visible for the most part. Black levels aren’t the greatest here, bordering on dark grey, but par for the course for budget LED TVs. A special mention for the skin tones that look quite natural on this screen. 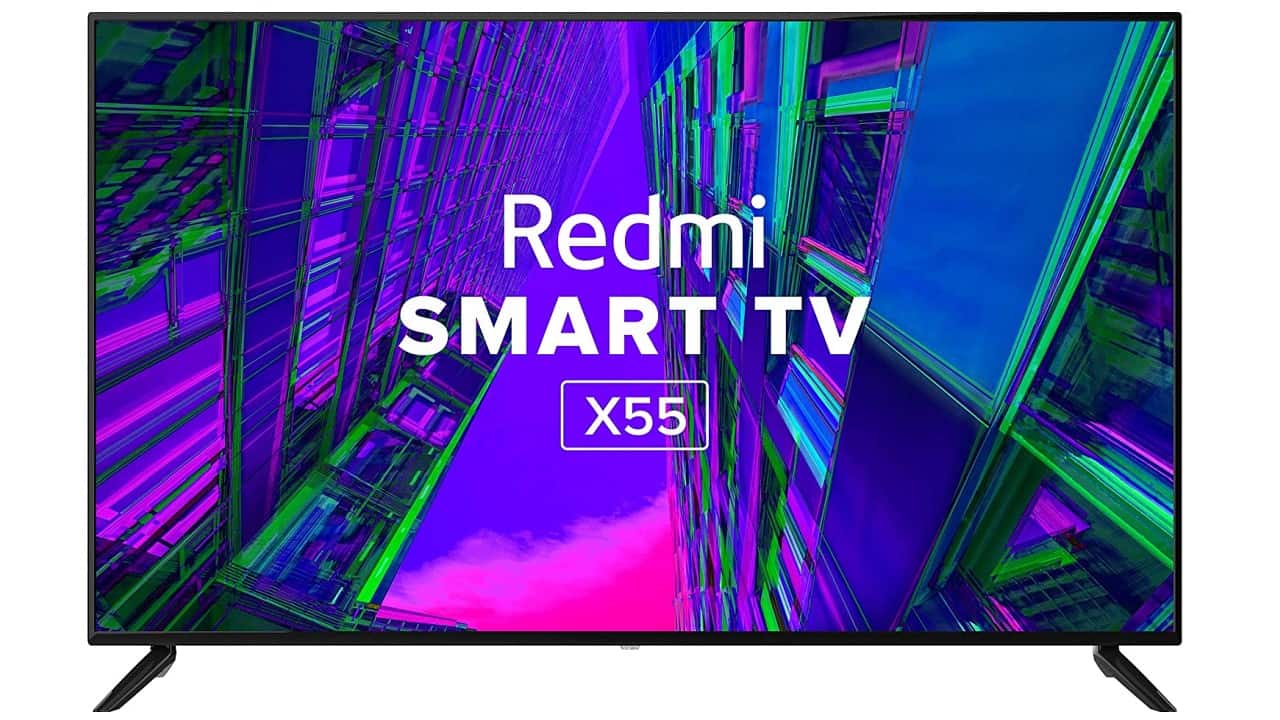 Dolby Vision content looks impressive here, and the same can be said about HDR10+ content, too. Shows encoded in those formats on Netflix and Prime Video respectively look pretty lively on this TV with vibrant colours and excellent contrast. There was hardly any flickering in high contrast scenes, which was good to see. 4K SDR content also looks sharp and vibrant on this TV with excellent detail. However, the colours feel slightly oversaturated at times. Adjusting the saturation level from picture settings helps in such cases.

Strangely, 1080p Full HD videos do not upscale well and look softer than they should. The colour reproduction seemed a bit off, too. After quite a bit of manual adjustment, they looked better, but not perfect. That’s quite unusual, and I don’t remember seeing an Ultra HD TV struggle with Full HD upscaling as much. Interestingly, 720p videos are perfectly watchable, and probably equally as sharp as their 1080p counterparts, relatively speaking. Anything lower than 720p looks flat or washed out, which is pretty much the case with all 55-inch 4K TVs. Viewing angles were excellent, given that we got a review unit with an IPS panel.

You get a handful of manual picture adjustment options such as brightness, contrast, sharpness, saturation, noise reduction and more, to fine-tune it to your liking. You also have some motion smoothening settings, but it’s best to turn them off as they tend to induce motion artifacts. I would also recommend turning off Dynamic Contrast. Long story short, the overall picture quality of this Redmi TV is noticeably better than that of the Mi TV 4X series, especially when watching HDR content, thanks to the support for Dolby Vision and HDR10+.

Audio output here is rated at 30 Watts RMS total, and it is generally good in terms of clarity. The speakers are tuned well and there is good vocal clarity with a decent amount of warmth in the sound. It is nowhere in the league of Hisense 55A71 TV or the Nokia TV range with Onkyo sound bars but is acceptable for the segment. The output isn’t the loudest, and you need to push the volume upwards of 50 percent at most times for normal loudness; at times, even beyond 75 percent for certain shows and movies on Netflix and Prime Video in a mid-sized room.

You get a handful of audio pre-sets and a five-band equaliser to tweak the audio further. And you can access those settings from anywhere by long pressing the PatchWall key. The sound is perfectly fine for watching news, sports or the odd web series/movie that’s high on dialogues and not action. You will crave a bit more bass in action sequences. The speakers are compliant with Dolby Audio and DTS Virtual: X. Dolby Atmos is available only via passthrough, but it’s not like it makes a huge difference on TV speakers anyway. The TV gives you a good variety of audio outputs – from digital to analogue to wireless – for plugging in a soundbar and enhancing the audio further. This Redmi TV takes less than 40 seconds to boot up when you switch it on from the mains, which is standard for most Android TVs. The TV supports quick wake and comes back on in less than three seconds from standby mode if you switch it off and on using the remote. The default media player is decent enough when playing content from a USB drive, and you always have the option of installing VLC player from the Play Store.

While some keys on the remote double up to execute other functions, I would still have preferred to see dedicated keys for settings and mute. At times when you look to lower the volume, you end up muting it if you press the button twice, which happens often. Similarly, if you don’t press and hold the PatchWall key long enough to get to the quick settings, it simply shuts the content you are playing and starts the launcher, thus inducing irritation. Despite that, Xiaomi has done a good job of addressing the missing features from the Mi TV 4X series, and making the Redmi Smart TV X55 a better all-round product.

The Redmi Smart TV X55 is priced at Rs 38,999 with a one-year warranty. No complaints about the pricing, given its feature set and overall performance. Along with compliance for all popular HDR formats, you get support for HDMI 2.1 with eARC, ALLM and a claimed 5 ms input lag that makes this TV a great budget option to pair with the latest consoles from Microsoft and Sony, and get the best out of them. It does have a few shortcomings including below-par 1080p video playback, but nothing that can be termed a deal-breaker.

If your viewing distance is a little under 10 feet, there’s also a 50-inch variant of this Redmi TV with all the same features that sells for Rs 6,000 less. As for similar-sized alternatives, you get the Hisense 55A71F in a similar price range that has better 1080p playback and sounds much better but lacks HDR10+ and HDMI 2.1 support. In comparison to its predecessor, the Mi TV 4X 55, the Redmi X55 fares better in pretty much every department and can be termed a worthy successor. All in all, a good smart TV for under Rs 40,000 in India.