We look closely at Realme’s latest wireless earphones that claim to offer improved sound and active noise cancellation under Rs 5000.

Realme has been serious about making inroads in the wireless audio products category over the past year or so. Their first wireless neckband was quite popular, and so were their Buds Air TWS earbuds, for what they offered at that price point. The company recently launched the Pro versions of both those products with active noise cancellation (ANC) under Rs 5,000. Time to take both for a spin (or a jog) and see how they fare. The sporty-looking wireless neckband from Realme borrows its aesthetic from its predecessor. And that’s no bad thing; the black and yellow combination works well. The build quality is solid with a combination of good quality plastic and metal, and yet it weighs under 35 grams. The buttons are tactile and the earphones are IPX4-rated sweat resistant. The earbuds feel a bit chunky, given the large 13.6 mm drivers inside, but they fit reasonably well inside the ear thanks to the silicone eartips. The magnetic earbuds double up as a power switch -- off when stuck together and on when separated. Barring the volume up and down keys, the other two buttons are programmable using the Realme Link app. You can choose from a list of functions to assign when you single, double and triple click them. The app also lets you boost the loudness and bass or cycle through the three listening modes -- ‘Normal’, ‘Transparency’ and ‘ANC’. You can even switch off one of the modes. I wish there was an equaliser too.

If you are wondering what those listening modes do, ‘Transparency’ mode lets outside noise through so that you can stay alert to announcements or your surroundings when outdoors, or have a conversation without removing the earphones from the ear. ‘ANC’ cuts out some of the outside noise (mainly low and midrange frequency ambient sounds) when switched on, but distorts the sound quality considerably and makes it unpleasant. So the USP of the Realme Buds Wireless Pro (ANC) is also its greatest drawback. I will get to that in a moment.

The battery life here is quite good, with the neckband clocking close to 16 hours of playback at 70-75 percent volume level with LDAC on all the time, and with ANC on for a couple of hours for testing purposes. You should be able to squeeze out a bit more with ANC completely off, which I would advise you to do. The company does advertise a figure of 22 hours of battery backup, but that’s on AAC codecs at 50% loudness with ANC off. If your phone or tablet supports LDAC, just use that. These Bluetooth 5.0 earphones sound noticeably better on LDAC than on AAC. One shouldn’t trade sound quality for battery life. The neckband takes about an hour and a half to charge fully through its USB type-C port, but a mere 5 minutes of charging gives you an hour and a half of playback time, which is very useful.

The wireless range is not so great here. As long as you are in the same room as the source device, the going is smooth. The moment you step out of the room and there’s a concrete wall between the earphones and the source device, they start to stutter. Most other bluetooth earphones do noticeably better than that. The call quality on this Realme neckband was inconsistent, ranging between perfectly fine to patchy. A fair amount of ambient noise seeps through too, when outdoors. The earphones also offer a 119 ms low latency mode, which is handy for gaming.

The overall sound signature of the Realme Buds Wireless Pro is warm and generally pleasant across various genres of music, barring instrument-heavy tracks. The lows are boosted, resulting in quite a pronounced bass; it’s fairly tight though. The highs are sharp enough too, without sounding harsh. The mids feel recessed, as is the case with earphones with this typical V-shaped sound signature. The vocals are mostly clear, but the instrument separation is average at best. The soundstage is surprisingly broad, and you get this nice sense of space in certain tracks.

The sound is enjoyable for the most part, as long as you listen to the phones in ‘Normal’ or ‘Transparency’ mode. The moment you switch on ANC, the sound feels distorted and imbalanced. The lows are impacted the most, and the mids sound muffled too. Long story short, the audio quality becomes unacceptable with ANC on. Ironically, the audio output of the Buds Wireless Pro without ANC is quite good for a wireless neckband priced in the sub-3K price band. It is the very piece of circuitry that takes its price up that causes the sound quality to drop several notches.

Realme should seriously consider launching another wireless neckband around Rs 2,000 with this exact hardware, but without ANC, and call it Buds Wireless 2, maybe. It can easily give the OnePlus Bullets Wireless Z a run for its money. The official pricing of the Realme Buds Wireless Pro is Rs 3,999 but they are available for an introductory price of Rs 2,999 in this festive season. As long as the price stays under 3K, it is still a decent buy for its sound quality (without ANC) and the battery life. If you were thinking of buying this product for ANC, look elsewhere. If pure sound quality is what you crave for, and can make do with half the battery backup, the Oppo Enco M31 is a great option for a good thousand Rupees less.

Realme Buds Air Pro retains most of the features offered by the Buds Wireless Pro in a true wireless (TWS) earbuds form factor. These too have ANC along with ‘Normal’ and ‘Transparency’ listening modes, Google fast pair support and programmable buttons (touch controls, actually). Again, you can use the Realme Link app to configure the buds. But you cannot assign volume up or down functions to the touch buttons. You have to go back to the source device to adjust the volume, something I am not too fond of when I choose to go wireless with my audio. The Buds Air Pro design clearly draws inspiration from the Apple AirPods Pro, with hard plastic shells and silicone tips. Though they weigh just 5 grams each, and are more comfortable to wear than the Realme Buds Air Neo (your opinion may vary, if you prefer hard shells to silicone tips), the fit isn’t the greatest. They are IPX4-rated splash resistant, but aren’t ideal workout companions. The shells are quite large, and don’t fit snugly. The eartips enter the ear canals just enough to hold them in place, and I found myself adjusting them every few minutes when I took them for a jog.

The passive noise isolation is average at best. Thankfully, the active noise cancellation doesn’t alter the sound profile here. Though not perfect, the feed-forward and feedback microphones do cut down on some of the ambient noise when ANC is turned on. It is nowhere in the league of Sony’s WF-1000XM3, but neither is its price. For less than a third of Sony’s selling price, the ANC on the Realme Buds Air Pro can definitely be considered acceptable.

The call quality here is average, with the person on the line struggling to hear you clearly in noisy environments, and a lot of ambient noise getting in the way. It was a lot better indoors, but still, the voice clarity wasn’t the best. There was no issue with wireless range though, with the buds retaining a strong connection up to 6 metres, even with a concrete wall in between. The low-latency mode is even better here, with the company flaunting a 94 ms number. The battery backup on the Realme Buds Air Pro is quite good, with the buds clocking close to 5 hours with ANC on half the time, and loudness close to 70 percent. Expect another 30 minutes with ANC off. The pebble (or cobble) shaped charging case can charge the buds thrice more, taking the overall battery backup to a shade over 20 hours, which is pretty good. The case supports fast charging via a USB type-C port, and 10 minutes of charge gives you close to three hours of play time, which is very neat. The battery level of each of the buds, as well as the charging case can be seen in its Bluetooth profile, even without the Realme Link app.

The sound quality of these TWS buds is more than decent for the segment, even though they only support AAC and SBC codecs. There is a good balance between the three major frequency ranges, with lows not getting extra preferential treatment. The bass produced by the 10 mm drivers is adequate and fairly tight. The mids have a distinct presence, with very good clarity in vocals, but I would have preferred a bit more detail . There’s ample sparkle in the highs, without being sibilant on most occasions. Some tracks do sound a little brighter than ideal, but not bright enough for fatigue to set in early. The soundstage is not as broad as in case of their wireless neckband, but it's decent. 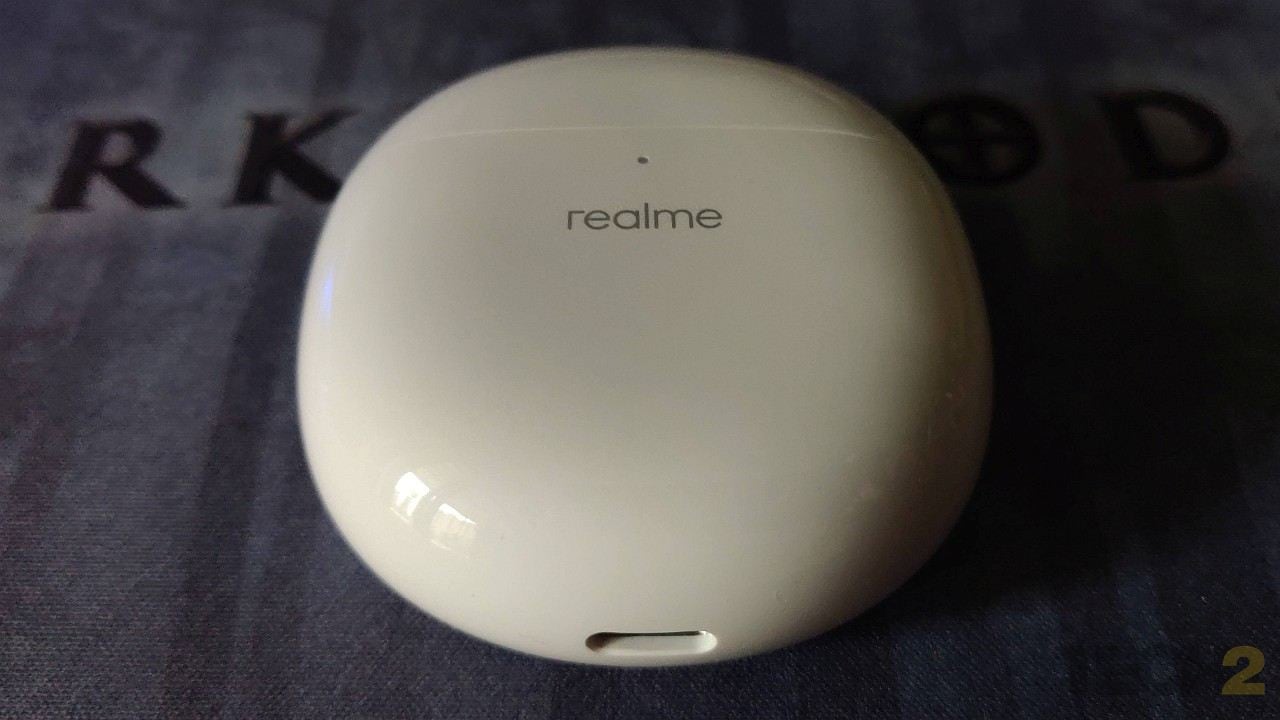 If you look at Realme Buds Air Pro’s sound quality in isolation, it is fair to expect a little better in TWS earbuds priced at Rs 4,999. But when you factor in functional ANC, wear detection (the audio pauses automatically when you remove the buds from the ear), and responsive and programmable touch controls, the overall package is good enough, with little competition. If you seek much better sound quality, without the extra frills like ANC or touch controls, you should strongly consider the Creative Outlier Air or Lypertek Tevi that sell for Rs 2,000 more. They provide better battery backup too, and support Qualcomm’s aptX codecs.