Realme’s budget soundbar certainly enhances the TV viewing experience, but could have done better with a few more features.

It is good to see the budget soundbar category in India heating up in 2020. It still isn’t where I would have liked it to be, but is certainly in much better shape than at the same time last year. Realme too decided to throw their hat in the ring with a solitary soundbar model that they launched along with their SLED TV this quarter. Time to check if Realme is just testing waters or looking to create waves in this segment with this product. 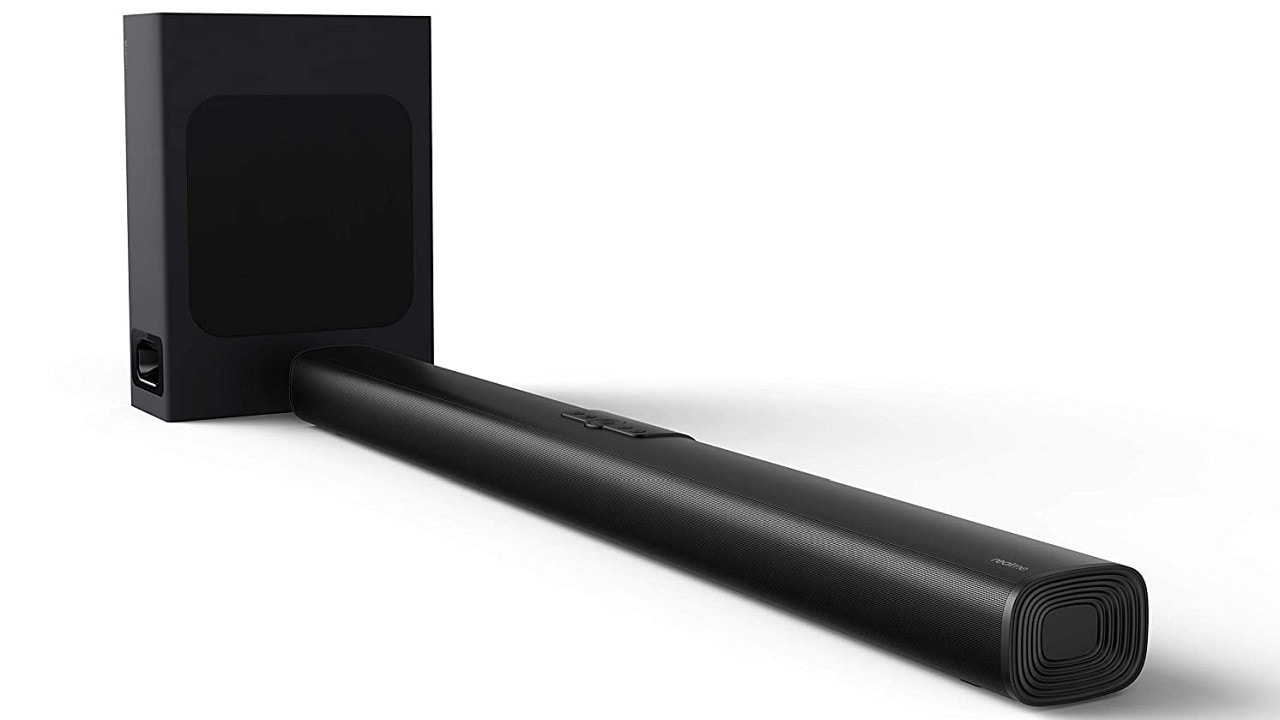 The soundbar is simply called the Realme 100W soundbar; no fancy nomenclature like some of their phones or earphones. This soundbar has a sleek and pleasant design, with an all-black body and a metal grille up front. The company branding is fairly subtle at the top right of the bar and at the top left of the subwoofer. The concentric pattern on the side of the bar looks cool and adds a bit of character. The construction is quite rugged and doesn’t feel cheap.

The company branding is fairly subtle at the top right of the bar and at the top left of the subwoofer. Image: Tech2/Ameya Dalvi

The bar is about 3 feet long and fits perfectly under a 43-inch TV. You also get a wired subwoofer with a 5.25-inch driver placed on the right and the port at the front. The subwoofer unit is noticeably slim as compared to most subwoofers, just like in case of the Zeb-Jukebar 4000. The bundled cables are long enough and the soundbar can easily be wall-mounted with a pair of screws and brackets that are provided in the package. Speaking of the package, a coaxial cable, as well as an HDMI cable, are bundled along with a full-function wireless remote control and a pair of AAA batteries.

All the input ports are placed at the back of the soundbar. There is just enough space to connect the cables to the ports in case you choose to wall mount it; a common design flaw in most budget soundbars. You will need to first connect the cables and then position it on the wall. Plugging in a USB drive will be even harder, unless it’s a small one. The best place for the USB port is either on the side or top of the bar for easy access. The ports are recessed, which leaves you with slightly extra room to play with.

The power button along with volume control keys, play/pause button and input selection are placed at the top-centre of the soundbar. Unfortunately, there is no display of any kind on this soundbar. Instead, the company has opted for five blue/green LED lights along the bottom edge. A different combination of blue and green lights indicates different inputs, and the soundbar also spells it out for you loudly when you choose one. One of the LEDs blinks when you increase or decrease the volume, but there is no way to check the volume level. I would have preferred a simple 7-segment LED display over these LEDs.

The power button along with volume control keys, play/pause button and input selection are placed at the top-centre of the soundbar. Image: Tech2/Ameya Dalvi

There are plenty of connectivity options on this Realme soundbar, and that gives you the option to connect a wide variety of devices to it. You get Bluetooth 5.0, 3.5 mm Aux in, Optical in, Coaxial input, USB and most importantly, HDMI ARC. That pretty much takes care of everything worthwhile. It is good to see HDMI ARC starting to be a staple on budget soundbars.

The soundbar has four 2-inch drivers, each rated at 15 Watts RMS, to take care of high and mid-range frequencies. They deliver a combined output of 60W RMS, while the 5.25-inch subwoofer delivers another 40W RMS, thus taking the total rated power of the system to 100W RMS. The rated frequency response ranges between 50 Hz to 24 KHz. This soundbar doesn’t get any Dolby certification, which is the case with the majority of soundbars in this budget.

The wireless remote control bundled with this system is basic, elegant and reasonably well built. The buttons feel a tad rubbery though. It has buttons for volume, audio playback functions, three equaliser presets (Movie, Music, News) and buttons for different inputs. There’s a power and mute button too. I would have preferred to see bass and treble controls here. More on that in the next section.

I tried playing different types of content through Aux, Bluetooth and HDMI inputs to test the soundbar. The sound quality was similar for the first two inputs, but was clearly a couple of notches higher on HDMI. When in Bluetooth mode, the master volume of this soundbar does not sync with the Bluetooth volume of the source device. You have to adjust both volumes separately, something I am not fond of.

The sound quality was similar for the first two inputs, but was clearly a couple of notches higher on HDMI. Image: Tech2/Ameya Dalvi

Moving on the sound quality, it is just about acceptable when you play something through Aux or Bluetooth. It is better suited for movies or web series than music. The slim subwoofer can generate a lot of bass, but it isn’t tight enough. As a result, music playback is serviceable at best, given its pricing, but the audio sounds too boomy with lows overshadowing all other frequency ranges. And there are no bass controls to tone it down, or treble controls to improve the sharpness.

Of the three sound presets, ‘Music’ is the only usable one. The ‘Movie’ preset makes the sound hollow, and ‘News’ makes it too flat. Even all the yelling on news channels doesn’t sound right on the latter preset. Well, it doesn’t sound right on the greatest of sound systems, but you get the point. So stick to the ‘Music’ preset at all times, irrespective of the content type you are actually consuming. When you use the HDMI input here, the soundbar comes to life, and transforms into something significantly better. Not awesome, but noticeably better than the way it sounds on Aux or Bluetooth.

When watching web series or movies, it fills a mid-sized room with loud and punchy sound with enough clarity in dialogues and sufficient thump in action sequences. Even music played on YouTube or other audio streaming apps on the TV sounds significantly better when the audio is routed through HDMI. Needless to say, the experience is way better than what you would get on the TV speakers. Long story short, buy this soundbar only if you plan to use it with your TV’s HDMI ARC port 80% of the time.

The Realme 100W soundbar is available for purchase for Rs 6,999 with a one year warranty on Realme’s website and popular ecommerce platforms. The pricing is competitive, and you get a smart-looking soundbar with a wide variety of audio inputs that significantly enhances your TV viewing experience. The overall sound quality isn’t all that great on Aux or Bluetooth, but is quite solid if you use its HDMI input. Buy it only if you plan to use the HDMI input on most occasions.

In terms of the competition, there are a couple that would be hard to beat for this Realme soundbar. The Blaupunkt SBW-01 for one, if you can find it in stock, sells for a similar price and delivers better sound output, while retaining most of the input ports. It is Dolby certified too. Another option being the Zebronics Zeb-Jukebar 4000, that is comparable in terms of sound quality and inputs to the Realme, but lets you adjust bass/treble, and hence get better audio. It sells for a thousand Rupees lower too.