Qualcomm has just announced the launch of a brand new mobile platform. Called the Snapdragon 710, the new platform is meant to bridge the gap between the flagship 800-series platform and the high-end 600 series platform. Looking at the specs of the new platform, it’s immediately obvious that the new series is showing an increasing focus on enabling AI features on smartphones. Qualcomm notes that the 710 has 2x the AI processing capabilities of the previous 660 platform. The chip incorporates several new modules specifically for speeding up AI processing, including a new Hexagon 685 DSP, Spectra 250 ISP, Adreno 616 VPU.

And Kryo 360 CPU, all of which feature optimisations that enable faster and more efficient processing of AI workflows. Frameworks like Caffe2 and TensorFlow are natively supported and accelerated. Support for these frameworks means that features like video style transfer, Animoji, face unlock, object detection and more will run faster and more efficiently than on the previous 660 platform.

On the connectivity front, the 710 boats of an X15 LTE modem, which can offer a maximum bandwidth of 800 Mbps along with support for features like 4x4 MIMO for improving network quality. This is a significant bump over the 660’s X12 modem, which topped out at around 600 Mbps. According to Qualcomm, improvements in the X15 modem will also translate to about 2.5x improved performance in areas with poor signal quality.

Camera: All the bells and whistles, and then some

On the camera front, arguably the most important feature on a phone these days, things are getting very interesting.

The 710 series supports all the camera features that we’d expect from a flagship smartphone. Features like noise reduction, active depth sensing, slow-motion video, super-resolution, image stabilization and more are natively supported and hardware accelerated. Supported image resolution sees a bump to 32 MP on a single ISP and dual 20 MP units on dual ISP.

The Snapdragon 710 series will now natively support 4K HDR playback. We’d like to point out that when Qualcomm is talking about HDR here, they’re referring to true, 10-bit HDR. Regular 8-bit displays are capable of displaying a maximum of 16.7 million colours.

The new Adreno 616 GPU is claimed to be 35 percent faster than that on the 660 and it natively supports Unreal Engine 4.1.2 and Unity 5.6 features. Again, this will translate to much-improved gaming performance at a lower performance cost. The 710 platform supports QHD+ displays. 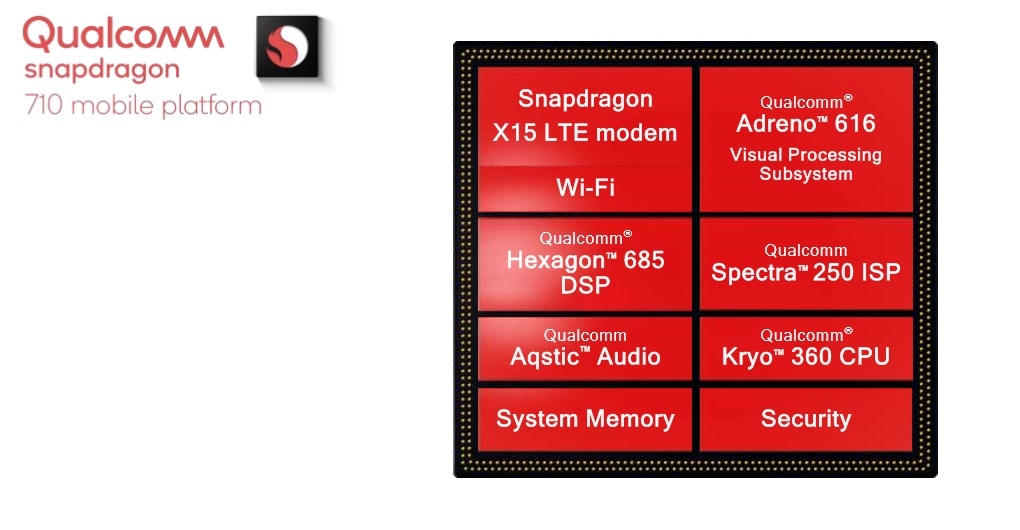 The 8 cores of Snapdragon 710 chipset.

The A75 and A55 are between 15 percent and 48 percent faster than their predecessors while still consuming the same amount of power. The A75 cores also sustain a higher load. Qualcomm’s modifications are sure to have extracted even more power/efficiency from these chips.

The 10 nm manufacturing process and use of more modern ARM cores should result in a faster, more efficient platform when compared to its predecessor. Overall, Qualcomm is touting 40 percent reduction in power consumption in 4K video playback and gaming and a 20 percent reduction in power consumption when streaming. Simultaneously, Qualcomm says that we’ll see up to 25 improvements in tasks like web browsing, app launch, and other tasks.

The platform also supports Qualcomm’s Quick Charge 4+ charging standard, which is capable of charging a phone to 50 percent within 15 minutes.

Vivo NEX S spotted on GeekBench with a Snapdragon 710 chipset; to be launched alongside the NEX on 12 June