A re-skinned Redmi Note 9 Pro, is the Poco M2 Pro a case of old wine in a new bottle?

(This review was originally pubbed on 7 July. It is being republished today, 14 July, as the smartphone goes on its first sale.)

Poco succeeded with the Poco F1 (review) as a “flagship killer” and by the year, it seems to have distanced itself quite nicely from its parent brand Xiaomi, in terms of what it brought to the table. The recently launched Poco X2 was a clear example and went by the brand’s newfound philosophy, which seeks to include “everything you need, nothing you don’t”. It’s always good to offer something more in terms of value when running a business. So with a 120 Hz HDR 10 display, 64 MP camera, and a Snapdragon 730G, it wasn’t a flagship killer anymore, but just what everyone wanted at the right price tag, which was competitive Rs 17,499 in India. 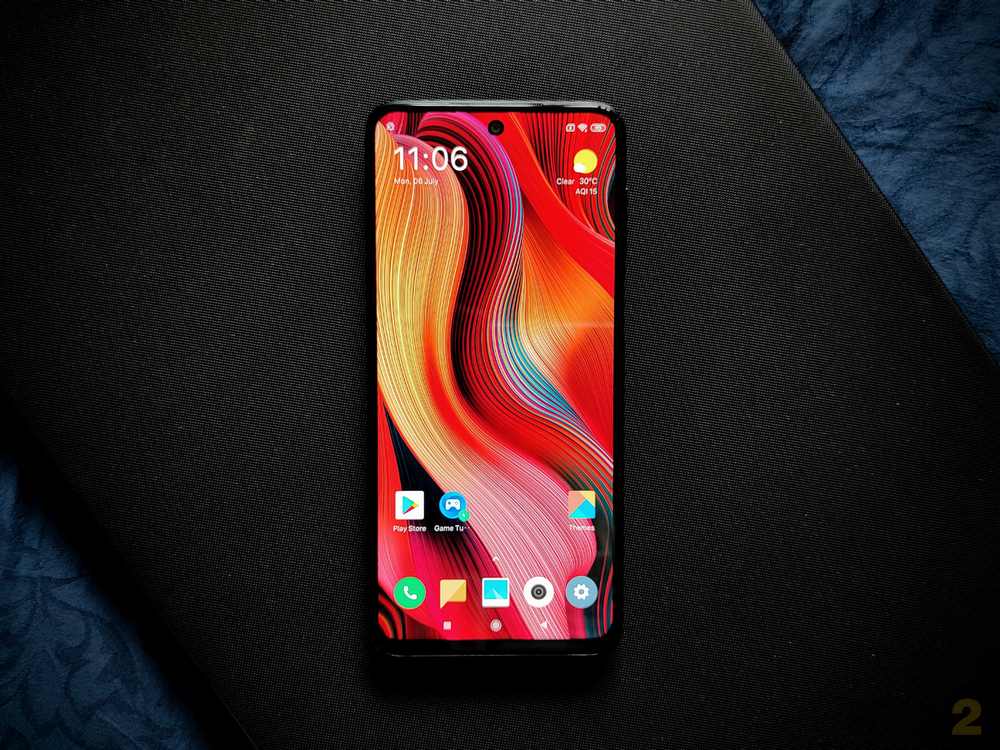 With a feather in its hat, it’s now time for Poco not to set its sights higher... but lower.

Yes, it’s now gunning for the lower end of the budget smartphone segment. But the 13,999 pricing may sound disappointing for some. You basically get a Redmi Note 9 Pro inside with the addition of 33 W fast charging. But then again, this is Poco’s take on the same hardware, so let’s have a look at how it performs and whether it’s worth your money or any better than the Redmi Note 9 Pro.

So, what do you get?

In short, plenty! But let’s dissect this budget beast one layer at a time.

On the front, below the Gorilla Glass 5 panel, there’s no 120Hz magic happening out here like on the pricier Poco X2 or the 90Hz display on the Realme 6, so it does not spell ‘speed’ right out of the box. But it’s a decent IPS LCD FHD+ display with the usual 60Hz refresh rate and a hole punch camera at the top, so there’s no pop-up nonsense out here. I really did miss that 120Hz display, which according to the product briefing was swapped out in favour of the faster charging speeds. Image: tech2/Sheldon Pinto

The display is just about bright enough to tackle direct sunlight and a bit too saturated even at the Standard display colour setting. But it wasn’t too pleasing to look at because scrolling text looked just too jittery. This could possibly be down to software optimisations or the display’s refresh rate but I did not encounter any issues while gaming… so it’s definitely down to software optimisations. In short, I really did miss that 120Hz display, which according to the product briefing was swapped out in favour of the faster charging speeds. 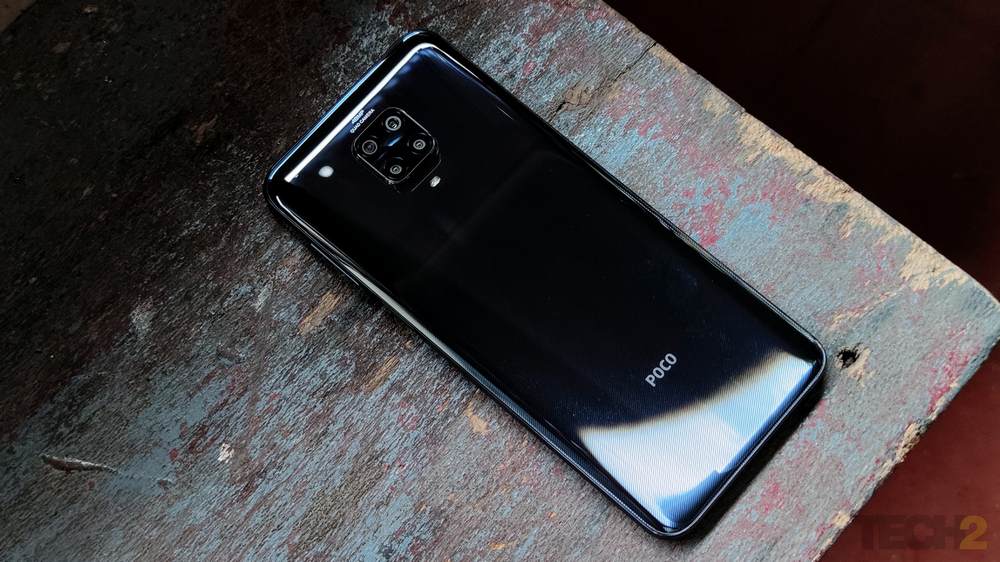 Flip it over to the back, and you may forget that you are actually holding a budget smartphone. The semi-textured curved back aptly called “Two Shades of Black” has a nice “hand-feel” (you get where I’m going with this). 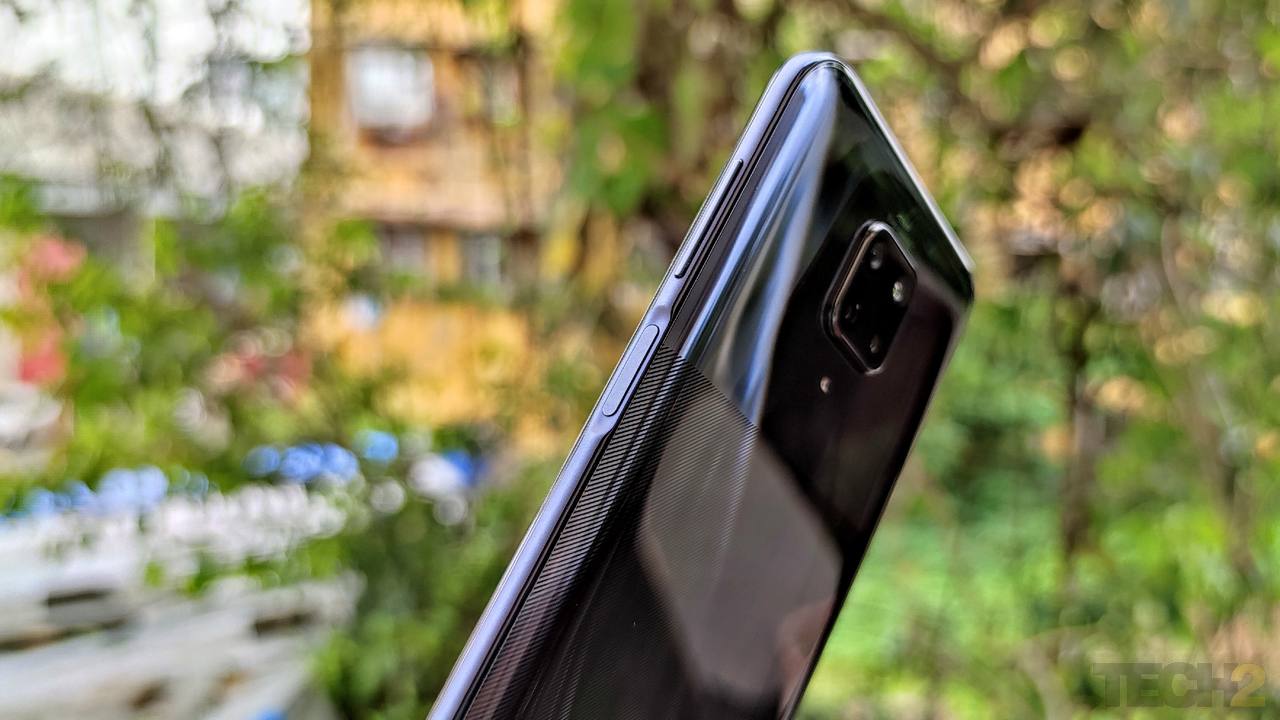 The camera island of the smartphone protrudes quite a bit. Image: tech2/Sheldon Pinto

And the matte-finished polycarbonate frame gives it a secure grip, which is good for gaming and for streaming the latest Episodes of Dark on Netflix. The camera island protrudes quite a bit, but it’s hard to tell, that a slim design like this packs in a meaty 5,000 mAh battery inside. After going with a Snapdragon 730G on the X2, Poco went with a 720G inside the M2 Pro. It’s good enough to handle everyday tasks and will easily take on any game you can throw at it without being a power hog like the Helio G90T inside the Realme 6 (and the Note 8 Pro). 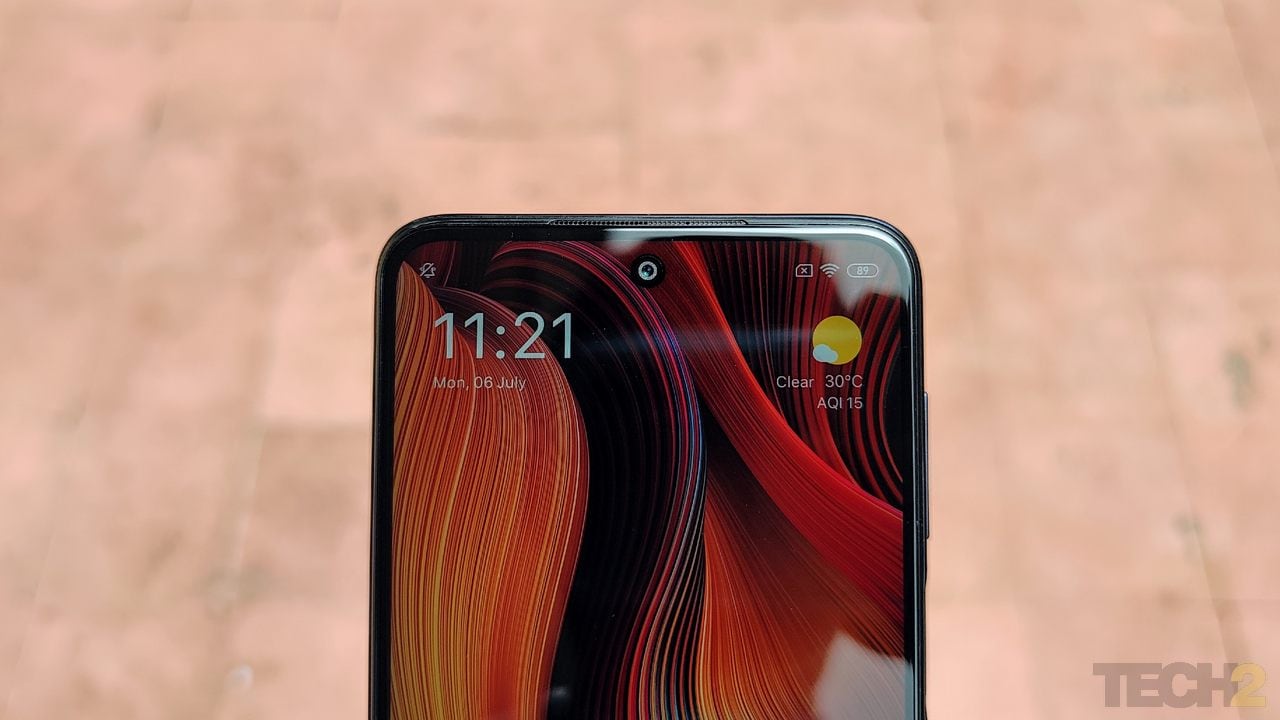 The camera island protrudes quite a bit. Image: tech2/Sheldon Pinto

There’s plenty of cameras, just not as many as on the Poco X2. The Poco M2 Pro gets a more budget-friendly setup which includes a 48 MP primary wide angle camera, an 8 MP ultra-wide, a nice 5 MP macro and 2 MP depth camera. There’s a 16 MP selfie camera up front and it sits in the display. The inclusion of a 5 MP macro is a nice touch indeed as most manufacturers simply go with a pointless 2 MP one.

And, what can you do with it?

For beginners, you can unlock the smartphone in a split second without hunting around for the fingerprint reader. Just like the X2, this one’s built right into the power button so I always had the phone unlocked before I pulled it up to read something. 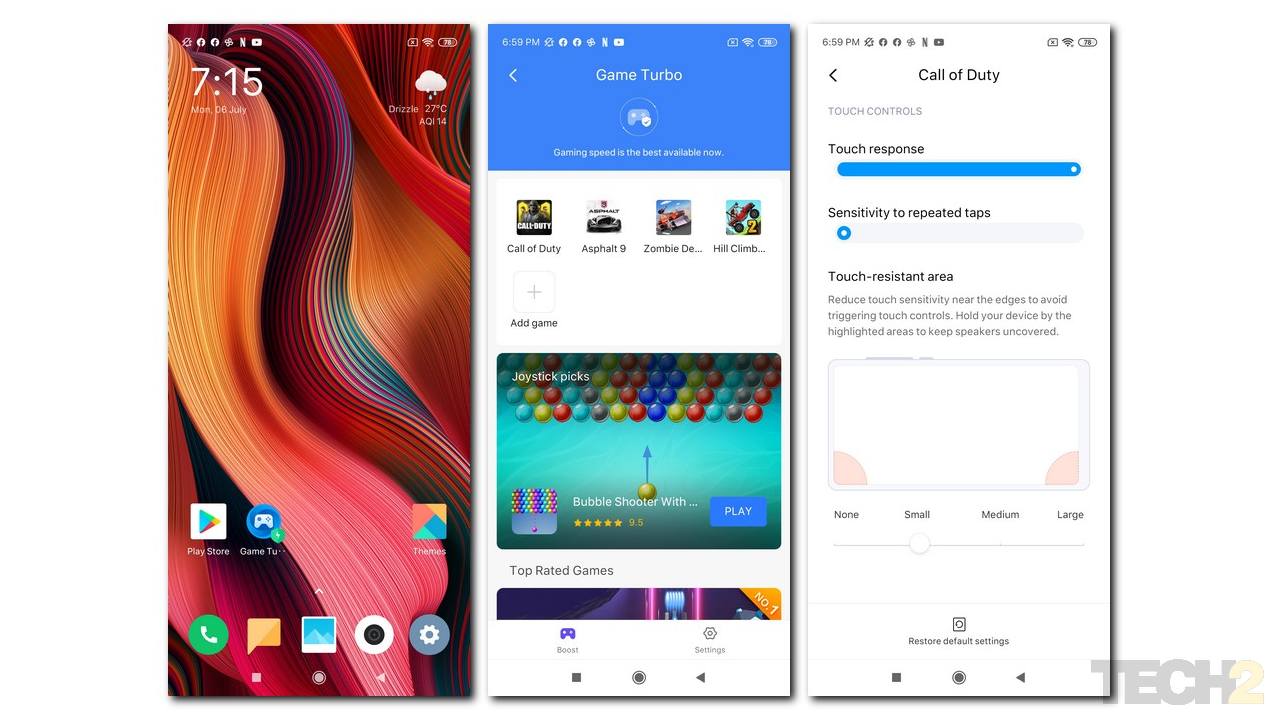 That 60Hz display may sound a bit boring, but with the Game Turbo software, can be tuned for some serious gaming. The game management software will do the usual by clearing your RAM and blocking calls, but it also lets you adjust the touch response of the display, its sensitivity to repeated taps and the touch resistant area for each game (individually), all of which actually work and is mighty useful while playing FPS games like Call of Duty: Mobile. The phone (like every other) does warm up, but it was not too hot for me to stop gaming and take a break. Image: tech2/Sheldon Pinto

With a Snapdragon 720G inside, games ran quite smoothly (though not buttery smooth as the Helio G90T) no matter what graphics setting you choose. I tried out COD: Mobile and Asphalt 9: Legends, and was able to run COD at Very High graphics for an hour without any hiccups. The same applies to the fast-paced arcade racer that let me crank up the graphics to High Quality and ran without any issues. The phone (like every other) does warm up, but it was not too hot for me to stop gaming and take a break. And since it has a big 5000mAh battery, you won’t really need to put it down! You can also get some decent photographs with it. No. It’s not going to be flagship-grade stuff, but Poco has managed to extract the most out of that 48 MP sensor. Daylight images come out quite nice with a decent level of detail, but a bit too oversaturated (like what you get on your Instagram feed). So the skies (like in the samples below) look abnormally blue and plants and foliage, abnormally green (or basically not the shade of green you can see in front of you). And this depends on which camera you use as the colour and white balance vary drastically between the three cameras. And this is before you turn the AI mode on, which will enhance things even further… making them worse. While the 8MP ultra-wide was decent at best, the 5MP macro camera sure did impress. Photos turned out crisp and the colours were at times more natural-looking than the primary camera. This again varies drastically. So, at times, the photos come out really nice. In bright sunlight, the colour temperature shifts drastically (and for no reason). You can also shoot video with the macro camera and provided you can keep your hands steady, the quality is quite impressive as you can see from the embed below. Indoors, I managed to get sharper and more detailed photos with the HDR turned off. Keeping it ON many a time resulted in unresolved details and blotchy textures. Focusing is a problem as well. Low light photos can be rescued with a Night Mode and it’s also available on the 16 MP selfie camera, which can also shoot portraits with a software bokeh because it’s AI-enabled. 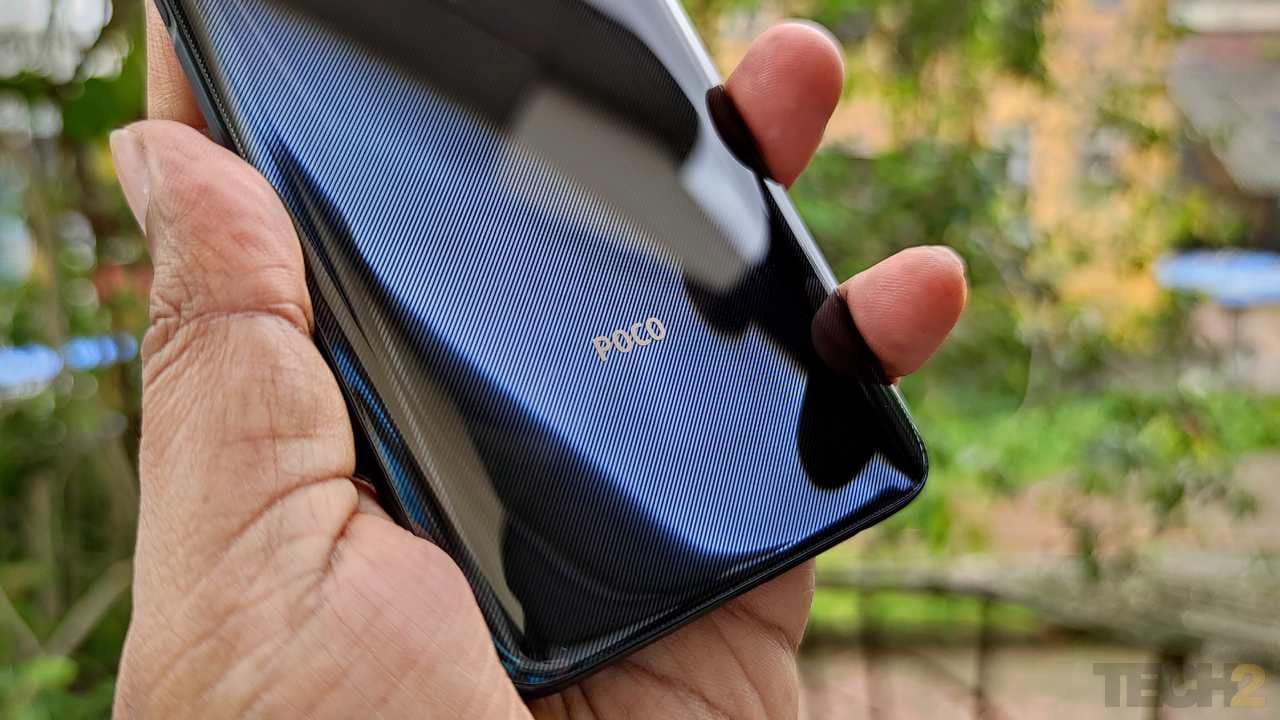 That 5,000 mAh battery makes it a road warrior and scored extremely well in our standard PCMark Work 2.0 Battery Life test at 18 hrs and 53 mins (most premium flagships like the OnePlus 8 Pro hover around 11 hours). This easily makes it good enough for more than a day of casual use. It easily lasted me a complete day with some action-packed gaming sessions and camera usage. And when it dies to zero, you can charge it up in about an hour and half with the in-box 33W charger. But I would have still preferred a 120Hz display over the fast charging system as the battery backup is big enough to last a day or more.

Stuff you need to watch out for On startup you are greeted with the usual bloatware of third party apps that you can uninstall and get out of the way. Poco’s take on software (Android 10 with a double scoop of MIUI 11) is a bit overwhelming. The camera icon looks like a rainbow coloured wheel, while most of the other icons (dialer, messages, settings etc.) try to mimic their stock Android counterparts, which they are not! software is an area that Poco needs to address, but it will be good enough for most and could improve with future updates. Image: tech2/Sheldon Pinto

This is a Mi smartphone through and through. So you do get all those features (like auto call recording) along with the “enhanced incognito mode” in the Mi Browser (better check that one first). And it all unsurprisingly feels a bit heavy even for the 720G so animations and transitions may feel a bit jittery as mentioned in the display section. Yes! It may sound like I’m nitpicking over a budget smartphone, but I did not see these issues on the Redmi (Note 8 Pro) side of things. Indeed, software is an area that Poco needs to address, but it will be good enough for most and could improve with future updates (read MIUI 12).

Poco claims that its smartphone is made in India and there’s plenty of labels (and stickers) on the box that indicate the same. If you’re not a fan of Chinese smartphones or a part of the #BoycottChina brigade, then Samsung A21s is an impressive smartphone (on paper) given that you get a HD+ Super AMOLED display, 6GB/64GB option (with a dedicated microSD slot) paired to a brand-new 8nm Exynos 850 chipset and a 5000 mAh battery at a higher Rs 18,499. In short, you gotta pay up for a well-made, non-Chinese smartphone.

Poco should have gone with a 90/120Hz display as its standout feature at Rs 13,999. This would have helped it retain its “SmoothAF” philosophy (which seems to be a bit lost on the M2 Pro) and differentiated itself from the Redmi Note 9 Pro.

The 33W charging system is leagues faster than the 18W system on the Note 9 Pro but not a big jump over Realme 6’s 30W charging.

When it’s all put together, the Realme 6 is still the phone to beat as a more gamer-friendly smartphone with a 90Hz display and that beastly Helio G90T inside.

The Poco M2 Pro is more of an all-rounder that gets things done. Oddly, it gets you Redmi Note 9 Pro hardware at the same price so it basically comes down to whether you are a Poco fan or simply crave that 33W fast charging (or in Poco’s language, whether you “feel the surge”). If you are not bothered with either of those you might as well get a Redmi Note 9 Pro with a slightly different design and a bigger 5020mAh battery inside.

Poco M2 Pro with quad camera setup to launch in India today at 12 pm: Here is how to catch the live updates