Researchers found that swine are adaptable, easy to seduce with food and susceptible to domestication - much like humans.

London: Scientists have sequenced the genome of the pig, showing the swine and humans share 112 DNA mutations linked to a range of disease including Parkinson's and Alzheimer's, which may be useful in fighting diseases.

Researchers, who undertook the largest ever study of the pig genome, found that swine are adaptable, easy to seduce with food and susceptible to domestication - much like humans. 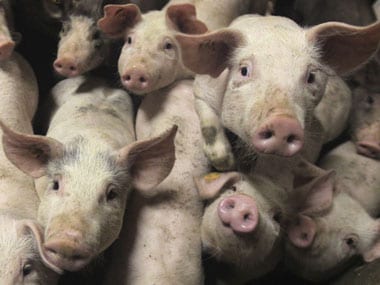 Insights into the genetic code of pigs reveal the swine and its cousin the wild boar have much in common with humans.

The new analysis also supports the use of the pig in studies of human diseases.

"In total, we found 112 positions where the porcine protein has the same amino acid that is implicated in a disease in humans," the researchers said.

"We identified many more gene variants implicated in human disease, further supporting the pig as a valuable biomedical model," Professor Martien Groenen, a principal investigator on the study, said.

"The improved knowledge of pigs' genetic make-up should help us breed healthier and more productive animals," Professor Alan Archibald, of The Roslin Institute at the University of Edinburgh, said in a statement.

The genome sequence also show that pigs suffer from the same genetic and protein malfunctions that account for many human diseases like obesity, diabetes, dyslexia, Parkinson's and Alzheimer's.

Researchers compared the genome or genetic make-up of domestic pigs with those of wild boars - from which domestic pigs descended.

Their study found significant genetic differences between wild boars from Asia and Europe, which split from a common ancestor around a million years ago.

These differences are also reflected in the genes of current day Western and Chinese breeds of domestic pigs, confirming the theory that pigs were independently domesticated in each region.

The scientists identified about 21,000 genes in the pig genome and compared these genes to their counterparts in people, mice, dogs, horses and cows.

These comparisons revealed that the immune response genes associated with fighting infection are evolving rapidly.

The analysis also showed that of all mammals whose genetic make-up has been decoded, pigs have the most genes linked to smell.