This Philips soundbar sports an eye-catching design and some fancy features like touch controls and a wireless subwoofer.

We have reviewed quite a few entry-level soundbars over the past year. Time to take it up a notch with this recent release from Philips. The HTL8162/94 soundbar sports an eye-catching design, provides good connectivity options and some fancy features like touch controls and a wireless subwoofer, but can it deliver room-shaking performance? Let’s find out. 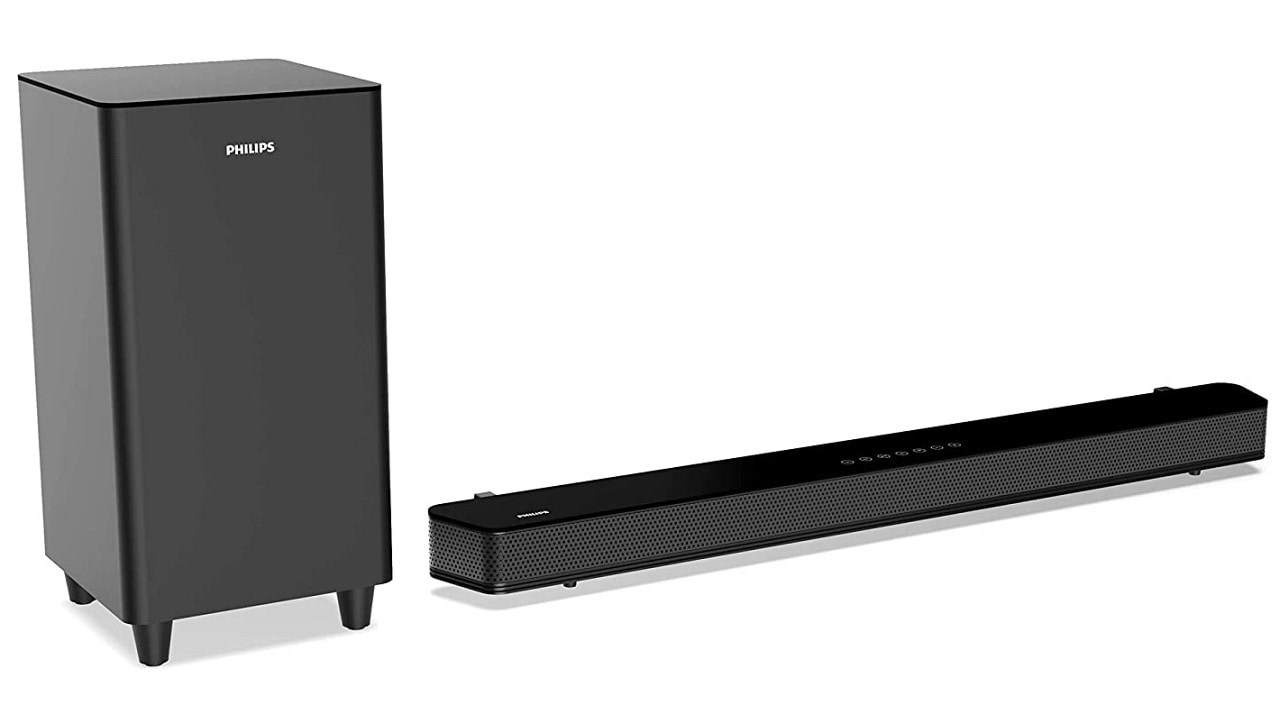 The bar has an all-black body with a metal grille that covers the front, and extends seamlessly to the sides.

This Philips soundbar is a sizable unit that measures 96 cm in width and close to 10 cm in depth, not factoring in the wall-mount clamps. But since it has a low profile design, it doesn’t look bulky from the front. Its trapezoidal shape is quite cool, and the glass top adds a touch of elegance. The bar has an all-black body with a metal grille that covers the front, and extends seamlessly to the sides. The construction is sturdy, and as a result, the soundbar isn’t the lightest around. You get touch controls for power, audio playback, volume control and input selection on top of the bar; a good placement of buttons.

You get touch controls for power, audio playback, volume control and input selection on top of the bar; a good placement of buttons. Image: Tech2/Ameya Dalvi

All the input ports are placed at the back of the soundbar, but they are located an inch deeper. That leaves just enough room to connect the cables to the ports in case you choose to wall-mount it. Plugging a USB drive may be touch and go if it isn’t small enough, and using an extension cable is advisable. The USB port should ideally be placed at the side of the bar, where it’s a lot easier to reach. There is a small 7-segment LED display at the front, which is always handy. It displays the input mode as well as volume/bass/treble levels among other things.

It seems to be made of low-grade plastic; not something one expects from a brand like Philips. Image: Tech2/Ameya Dalvi

A full-function infrared wireless remote control is also bundled in the package, but its build quality isn’t great. It seems to be made of low-grade plastic; not something one expects from a brand like Philips. You also get a wireless subwoofer in the bundle. Just like the bar, the subwoofer unit is on the larger side. Since it connects to the bar wirelessly over Bluetooth, you can place it on one side of the room. Just make sure there’s an electricity socket closeby to power the sub. The irony of this on a wireless subwoofer – while it eliminates one wire, it adds another.

There are plenty of connectivity options on the Philips HTL8162, and barring a 3.5 mm Aux input, most of the popular options have been included. You get Bluetooth 5.0, Optical in, USB and HDMI ARC. Though a 3.5 mm port is missing, you do get a coaxial RCA analog input, and with a RCA to Aux cable, you get it done. Another thing missing here is Dolby certification; it is a fair expectation given that this soundbar is priced close to Rs 15,000. Incidentally, one of its predecessors, Philips HTL2163B/12, with a selling price lower than 10K was compliant with Dolby Audio.

There are plenty of connectivity options on the Philips HTL8162, and barring a 3.5 mm Aux input, most of the popular options have been included. Image: Tech2/Ameya Dalvi

This soundbar has a pair of 4-inch drivers to take care of high and mid-range frequencies. They can deliver a combined output of 80W RMS, while the large 8-inch subwoofer adds another 80W RMS of power, thus taking the total rated output power of the system to 160 Watts RMS. The included remote does give you access to a lot of functions. It has controls for volume, bass, treble, buttons for input selection and audio playback, along with power, mute and Bluetooth pairing buttons. No complaints on that front. A pair of AAA batteries needed to power the remote weren’t bundled though.

I tried playing different content types through different inputs to test the soundbar. While the sound quality is acceptable via RCA input, it is noticeably better when using HDMI. In fact, I would say that this soundbar is meant to be used with HDMI input. I will come to that in a bit. The sound quality in Bluetooth mode is underwhelming. Also, the master volume of this soundbar does not sync with the Bluetooth volume of the source device. So you have to adjust both volumes separately; not so smart!

The audio played from USB is surprisingly punchy. It is loud, crisp and actually the next best thing to HDMI. Listening to music from a USB drive was a lot more enjoyable than streaming it over Bluetooth. You get to hear a lot more detail in audio. A lot of us have moved past playing music from USB drives with the arrival of Spotify and its ilk. But if you haven’t, you will like this soundbar more. As for the rest of us, this is where the HDMI input can come in handy if you plan to listen to music on this bar. Just install your streaming service app on your smart TV, and route the audio to this soundbar over HDMI ARC.

Moving on to the audio quality, the sound signature of the Philips HTL8162 is noticeably bass-heavy, but you do have bass and treble adjustments on the remote that help you temper it to an extent. I preferred to push the treble to the maximum, while leaving the bass at zero for most of my content. The soundbar can get quite loud for a mid-sized room at 50% to 60% volume level when playing content through HDMI input. In USB mode, I don’t remember going beyond 35%. Though the low-end frequencies are boosted, the highs are reproduced reasonably well, and there is a good amount of clarity in the dialogue for the most part. But it’s hard to completely ignore the excessive bass.

When watching web series or movies, this Philips soundbar enhances the audio experience way beyond what your TV speakers can deliver. There is a good amount of thump in action sequences as long as the source file is good. For instance, there was a world of a difference when playing the lobby scene from The Matrix on YouTube from some random channel as opposed to playing the same on Netflix or Prime Video. While the sound output of the Philips HTL8162 soundbar is generally enjoyable, it isn’t a massive step up from certain budget soundbars from Blaupunkt or JBL that sell for a good 3K to 5K cheaper.

The Philips HTL8162/94 sells for a price of Rs 13,999 with a one year warranty. You often get it for a thousand or two lower in online sales. For that price, you get a powerful sound system with some cool features like touch controls and a wireless subwoofer. Sound quality isn’t drastically better than what you get on budget soundbars. You can buy Dolby-certified soundbars for less.

Another alternative under Rs 15,000 would be the Sony HT-S20R, which sells for the same price as the Philips HTL8162. It may not have a wireless subwoofer or touch controls, but other features are at par, it sounds better and has a few extras too, like surround speakers and Dolby certification. A sweet spot for this Philips soundbar would be closer to 10K than 15K, where it can keep its head above the competition without demanding a sizable premium.