Oppo F5 with "AI Beauty" mode expected to launch in India on 2 November, company sends out invites for event

Chinese smartphone maker Oppo is sending media invites for Oppo F5's India launch which would happen on 2 November. The invite comes with a tagline 'Capture the real you' which is clearly in reference to yet another selfie smartphone. 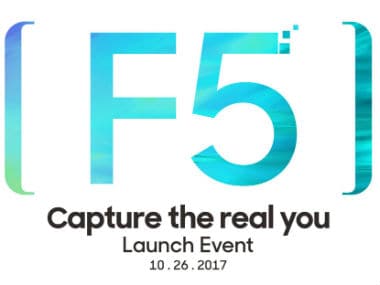 Oppo F5 launch is on 26 October in Philippines. Facebook.

The Chinese smartphone would be first releasing in Philippines on 26 October. And then after Diwali, it would be coming to Indian shores. As for its name, Oppo is jumping to Oppo F5 after F3 whose elder sibling was Oppo F1. As with OnePlus, which also skipped the OnePlus 4, this could simply because Chinese consider the number four to be inauspicious, or maybe Oppo just likes odd numbers.

One teaser lays emphasis on artificial intelligence technology. It is apparently supposed to beautify one's selfie using AI. The technology seems to have caught the attention of handset makers off late. Since Oppo carries the tagline of a ‘selfie expert’, the teaser's ‘A.I. Beauty Recognition Technology’ will most likely apply to selfies.

According to previous reports, and the rumoured display resolution, an 18:9 aspect ratio display can be expected. A casing of a metal unibody construction is also expected. Other features include a 4,000 mAh battery along with a Qualcomm Snapdragon 660 chipset. It is expected to come with a fingerprint sensor on the back side of the phone.

The colour variants are expected to be red and black.

The Oppo F3, which was released last month, was priced at Rs 19,999. It comes with 5.5-inch FHD display, protected with Corning Gorilla Glass 5 and a MediaTek 6750 octa-core chipset which can be clocked at 1.5 GHz.

Meanwhile, it also comes with 4 GB RAM and 64 GB of internal storage. The device has a 13 MP camera on the rear and a dual front facing camera, which includes a 16 MP and 8 MP unit. A special Diwali edition is available on Amazon. The red coloured, limited edition Oppo F3 is priced at Rs 18,990.