Oppo F5 first impressions: A selfie smartphone with performance on its mind

In a sea of selfie smartphones, mobile devices by Oppo have stood out because of the level of quality and craftsmanship offered by the brand

In a sea of selfie smartphones, mobile devices by Chinese smartphone maker Oppo have stood out because of the level of quality and craftsmanship offered by the brand, one that somehow cannot be matched by its sibling Vivo. Today, at the launch of the F5, a brand-new smartphone from Oppo, it became clear, that while the brand was still about selfie smartphones, it was high time Oppo brought something more to the table. 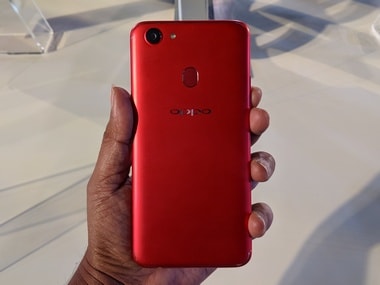 So apart from the usual selfies, something that every other smartphone manufacturer has now begun to offer, the Oppo F5 now packs in a new-age display, thinner bezels, and now focuses on performance, which should make it stand out as not just a selfie smartphone, but as an all-rounder as well.

Oppo has indeed taken a bold step out here. Instead of going for a metal build that feels premium, the smartphone maker has gone for a premium-looking one instead. This is because the device seems to be made of plastic. In my limited usage time, it did not feel heavy and did not feel cold like the Pixel 2, which was in my other hand. While some may be OK with a plastic smartphone, this is something that most customers would expect in the budget smartphone segment and not the mid-range. The 18:9 display ratio is soon becoming a must-have feature in the mid-range segment. Image: tech2/Sheldon Pinto

Still, the construction and build quality felt top notch, with no creeks while holding it or any unfinished rough edges anywhere. The body seems to be made of plastic instead of the usual metal panels. Image: tech2/Sheldon Pinto

The design is still typically Oppo in every way. There's the usual rounded corners and the device seems to be slim with a thickness of just 7.5 mm. 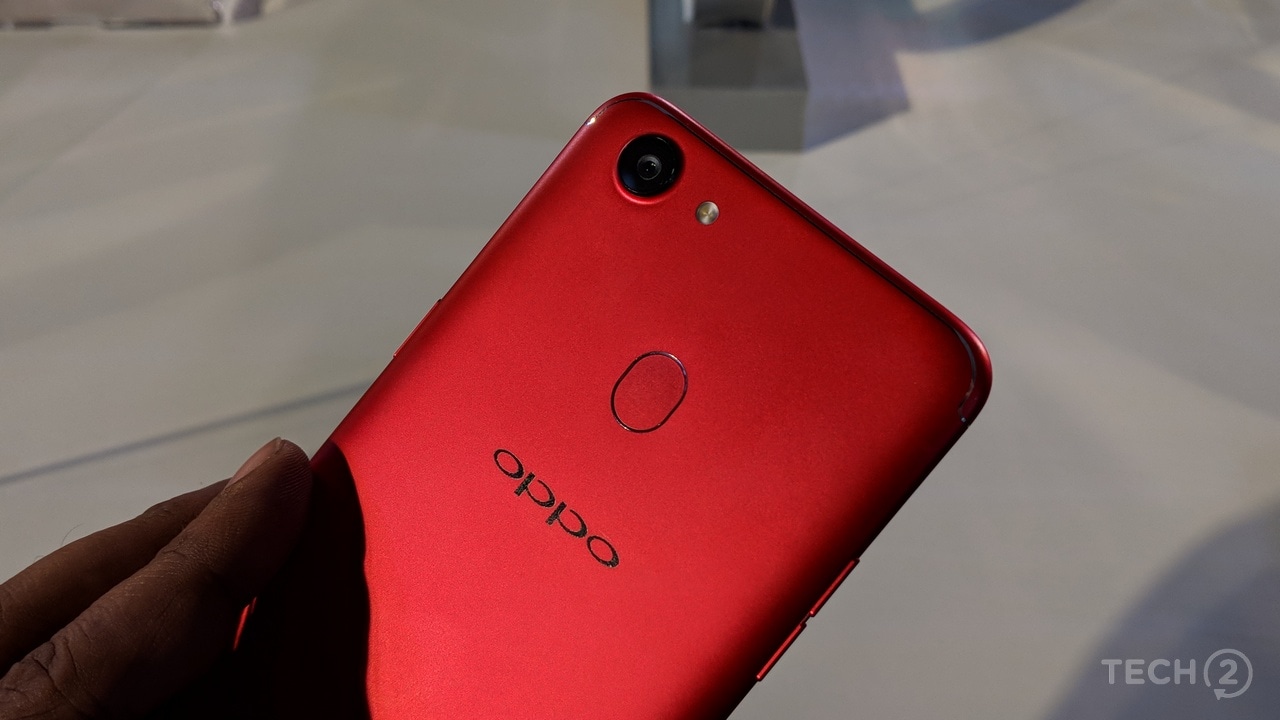 The fingerprint reader now sits on the rear. There's a facial unlocking system to make up for it. Image: tech2/Sheldon Pinto

But the real attraction is on the front face, which is where that new 18:9 display lies. It looks fresh and new, and the 2.5D Corning Gorilla Glass also adds to the premium look. However, the rough-edged lipping kind of takes the charm of the glass away, when you swipe outwards from the edges of the display.

The Oppo F5 packs in a surprisingly sharp 6.0-inch display. The display features a FHD+ resolution, which means that buyers will get a resolution of 2,160x1,080 pixels with 16 million colours. The unit is an LTPS TFT LCD display and looked decent during my limited hands-on time with the device, which was mostly in a dimly lit environment. Colours appeared to be a bit washed out, despite the display being bright enough. Text and images appeared sharp and the touch response seemed accurate as well.

This is an area where Oppo seems to have made some big changes to its smartphone strategy. The Oppo F5 packs in a Helio P23 octa-core chipset. The chipset is built using the 16 nm manufacturing process and incorporates eight Cortex-A53 cores with the low-powered cores operating at 1.65 GHz, while the big cores run at up to 2.3 GHz. Going with a P23 was a good move as well, because the chipset also supports up to 6 GB of dual channel LPDDR4X memory and comes with an LTE modem supporting category 6 speeds.

So it’s clear that Oppo does have performance in mind, one that should get it shoulder to shoulder with the recently announced Huawei Honor 9i.

The Oppo F5 caters to both casual and power users, by offering two variants of the smartphone. There's one with 4 GB RAM and 32 GB of storage and another higher-priced variant with 6 GB RAM and 64 GB of internal storage. Both variants support microSD cards of up to 256 GB.

Like most the Chinese smartphones these days (including some Korean ones), the Oppo F5 does not come with the latest version of Android. The device packs in Android 7.1.1 Nougat, with a generous serving of the iOS-like ColorOS, which somehow brings a sense of uniformity and consistency to the user interface. The software ran buttery smooth on the 6 GB RAM unit I used during my short hands-on period. There were no slowdowns and the software glided through apps and even when multitasking, hinting that Oppo has worked on optimizing the software with the odd hardware choice of a Helio P23 chipset.

Considering that the similarly priced Honor 9i features quad-cameras, Oppo strangely chose not to go with the numbers game and include just single cameras on the both the front and back. There’s a 20 MP camera with an f/2.0 aperture on the front while a 16 MP unit with an f/1.8 aperture lens is available at the back. At the launch event, Oppo claimed that it is the first smartphone brand in India to make use of AI for clicking better selfies. The Oppo smartphone AI Beautify technology will sync up to a global database and learn to optimize and deliver the best selfies, no matter what the skin or face type. The technology also lets the camera capture selfies in challenging lighting conditions. Indeed, these are some tall claims made by Oppo, so we will have to test these out the during our review to check whether the AI brings about any substantial change to the selfies, compared to previous smartphones by the brand.

With a 3,200 mAh battery, an FHD+ display and a 16 nm chipset, owners will have little to worry about when it comes to battery life. But things begin to look a bit shaky when you factor in that there is in fact a large 6-inch display to power on the F5.

For now, we are hoping that Oppo has made some optimisations that should help cut down usage and increase battery life.

As for connectivity, 4G LTE bands, GPS, Bluetooth 4.2, Wi-Fi 2.4/5 GHz 802.11 a/b/g/n and a USB port at the bottom. We doubt there’s fast charging included as Oppo made no mention of the same during its expansive presentation at the launch.

After our limited hands-on time with the Oppo F5, it’s hard to come to a conclusion as Oppo seems to have broken the norm by offering not just another camera-centric, selfie-smartphone but a device that will appeal to those looking at the performance factor as well. The Oppo F5 will have to compete with the Honor 9i.

With that, the Oppo F5 seems to be more of an all-rounder than just a selfie smartphone. But we will have to put the device through its paces to figure out if all that performance helps it compete with its arch rival, the Huawei Honor 9i. The 9i is feature-packed mid-ranger that has so far managed to take down the likes of the Vivo V7+, the Moto G5S and more with average low-light performance being its only downside.

If the F5 can perform better, we may have a new winner in the mid-range smartphone segment indeed. Stay tuned for a full review.

PhonePe raises $700 million in a new funding round led by Walmart, becomes a separate entity