There’s nothing flashy about Oppo Enco Buds2 in terms of looks or features, but they focus on the basics and largely get it right.

Not too long ago we reviewed the Oppo Enco X2 TWS earbuds, the company’s flagship product, and totally relished them. While that caters to a different set of users, what we have for you today is targeted at the masses, given its attractive price tag. The Enco X2 managed to raise the performance bar around the Rs 10,000 mark. Can the Oppo Enco Buds2 do the same in the sub-2K segment? Let’s find out. 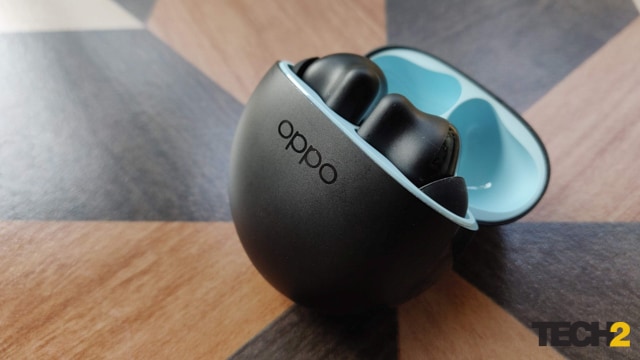 Oppo Enco Buds2: Design and Comfort (8/10)
The design of the buds is not very different from some of Oppo’s previous products, but drastically different from its predecessor. They look a lot like the Oppo Enco Air 2 Pro rather than the Enco Buds. Having said that, it doesn’t look bad at all if you like TWS earbuds with stems. You only get the black variant at the moment, and it largely sports a matte black finish with just a hint of gloss on the buds as well as the case. The inside of the case has a pleasant light blue shade, which looks cool. 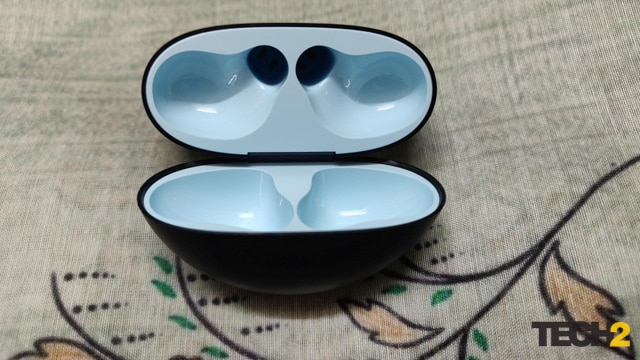 The circular charging case is quite slim and easily pocketable. Despite its slim profile, it hosts a sizable 460 mAh battery and weighs just 38 grams. A charge indicator LED and a USB-C charging port are located at the bottom of the case. The earbuds are fairly light too and weigh just 4 grams each. They are extremely comfortable to wear for long hours and snug enough to not pop out of the ear during a workout or a jog.

The right-sized silicon tips offer very good passive noise isolation. Two extra pairs are bundled in the package but a USB charging cable is absent. The touch-enabled zones are present at the top of the stems, and the area is flattened out to give you an idea of where to tap. The touch sensitivity is good and the buds produce a small click every time you tap in the zone. It supports single tap, double tap, triple tap and ‘touch and hold’ gestures.

Oppo Enco Buds2: Features and Specifications (7/10)
The Enco Buds2 are IPX4-rated splash resistant, but not dust resistant as well like its predecessor. Having said that, a special mention for the fluid resistance of these Oppo buds. I had a small mishap on a flight and spilled coffee all over the buds. Two weeks later, they are still functioning perfectly fine with no change in sound quality. Thankfully, the charging case was not involved in this coffee-tasting session as that does not have any ingress protection. Each earbud is fitted with a 10 mm Titanized dynamic driver and a microphone for calling and ‘AI Deep Noise Cancellation’ for calls. There is no active noise cancellation (ANC) or wear detection sensors here, which is acceptable in this budget. These earbuds are Bluetooth 5.2 compliant and support SBC and AAC codecs. There’s support for Dolby Atmos too when paired with compliant phones. The latency can supposedly go as low as 94 ms in Game mode.

You don’t need to install any app if you use these buds with a OnePlus, Realme or Oppo phone. You get access to a bunch of customisations for the buds in the Bluetooth settings itself. For all other phones, you will need to install the HeyMelody app and sync the earphones with it to tweak certain features of this product. The app lets you alter the sound profile, configure the controls and update the firmware. The use of double tap as a camera shutter is limited to Oppo phones only, I suppose, as it did not work on the OnePlus phone I was using.

You can allocate functions to a single tap, double tap, triple tap and ‘touch and hold’ gestures for the left and right earbuds. You can assign play/pause, previous/next track, voice assistant, Game mode or nothing to the first three gestures. Not all functions are available for each gesture. Volume control can only be assigned to a ‘touch and hold’ gesture, but it’s great to have that option on the earbuds itself so that you don’t have to reach for the source device to alter the loudness.

Oppo Enco Buds2: Performance (8/10)
These buds are among the loudest around, and the volume level mostly stayed between 40 to 50% during the course of my testing. That is sufficiently loud indoors as well as outdoors. I wouldn’t advise taking them beyond 70% as they sound a bit too bright and harsh on the ear. Oppo offers you three sound profiles for these TWS earbuds – Original sound, Bass boost and Clear vocals. Interestingly, all three are usable, though I preferred the default Original sound profile over the other two. The default sound signature is reasonably balanced for a pair of budget wireless earphones. The bass is punchy but tight and doesn’t majorly impact the midrange frequencies. The vocals sound sharp and lively. The highs have a good presence too but could have been tempered better, especially the S sounds that tend to sound a tad harsh in certain tracks. While I found the bass adequate, some may crave more. That’s where the Bass boost preset comes in handy.

It does boost the bass at the cost of certain lower midrange frequencies but doesn’t overdo it. It gives you a more traditional V-shaped sound that the masses prefer. The Clear vocals preset is better suited for podcasts and other voice-heavy content, and not so much for music. The soundstage here is not too broad, but that’s what you generally get in this segment. We faced no latency issues with no perceptible lag between the video and audio when watching videos on my phone. The wireless range is pretty standard with a strong connection of up to 10 metres with a clear line of sight.

Oppo Enco Buds2: Call quality (6/10)
The call quality on the Enco Buds2 is not very impressive. It is decent indoors, and while the vocals aren’t the sharpest, people on the line did grasp what I was saying without much effort. When outdoors, the ‘AI Deep Noise Cancellation’ didn’t really work for me with people complaining of too much background noise being audible to a point that it would impact the conversation. Generally, Oppo TWS earphones are pretty good for calling. This one needs more work, especially the noise cancellation algorithm.

Oppo Enco Buds2: Battery life (8.5/10)
The battery backup of the Enco Buds2 is quite impressive. The company claims 7 hours for the buds and 28 hours overall with the charging case. Given the battery specs and that there is no ANC here, these numbers seemed doable. With the loudness mostly between 40 to 50% during testing, the earbuds managed to go on for close to six and a half hours, and the case could recharge them thrice over. That translates into an overall battery backup of close to 26 hours for the buds and case combined, which is quite impressive. They also support fast charging, but the numbers are modest at best. A 10 minutes charge promises an hour of playtime, which is handy, not spectacular. The product can be fully charged in a couple of hours, while the buds alone take about 90 minutes to charge. The battery level of each earbud and the charging case is visible in the Bluetooth settings of the synced device or in the HeyMelody app.

Oppo Enco Buds2: Price and verdict
The Oppo Enco Buds2 is priced at Rs 1,999 with a one-year warranty, and can often be spotted for 10% lower online. For that price, you get a pair of TWS earphones with a neat design, lively sound output, multiple sound profiles, configurable controls and impressive battery backup. That makes it one of the best TWS options in this segment. 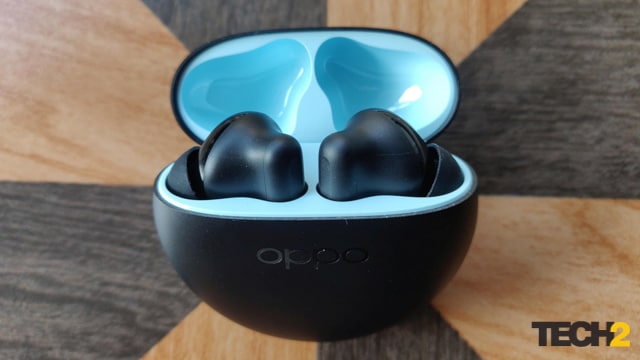 Of course, there is competition in this segment, but there’s only one option that can truly give these Oppo buds a run for their money. The Realme Buds Q2 which sells for a similar price offers most of the features that the Enco Buds2 do as well as comparable sound output. In addition to that, it also offers functional ANC, something quite rare in this segment. However, the battery life is at least 25% lower. Both are excellent products that offer great value, and neither would disappoint you if you have a budget of 2K.