Oppo A5s does better than the Realme 3 except for having a slightly brighter display.

The sub-Rs 10,000 segment of the smartphone world is being strongly contested by smartphone makers in India. This is a segment which sees the most number of smartphones sold in the country as is apparent by a Counterpoint report which stated that Redmi 6A and Redmi Y2 (Review), both under Rs 10,000 were the highest selling phones in India last year. Oppo as a brand has till now not been heavily invested in this segment but it appears that it looks to change this with the Oppo A5s which is priced at Rs 9,990. I got to spend some time with the Oppo A5s and while the device is good in some aspects such as its big and immersive display and good battery life, other things such as camera, software and performance take a back seat. The Realme 3, which starts in at the exact same price appeared to me as a more superior device.

Should you buy the Oppo A5s? I think not. Read on to find why.

The design of the phone looks quite classy given its price. The back of the phone is made of plastic and features a flat red finish. 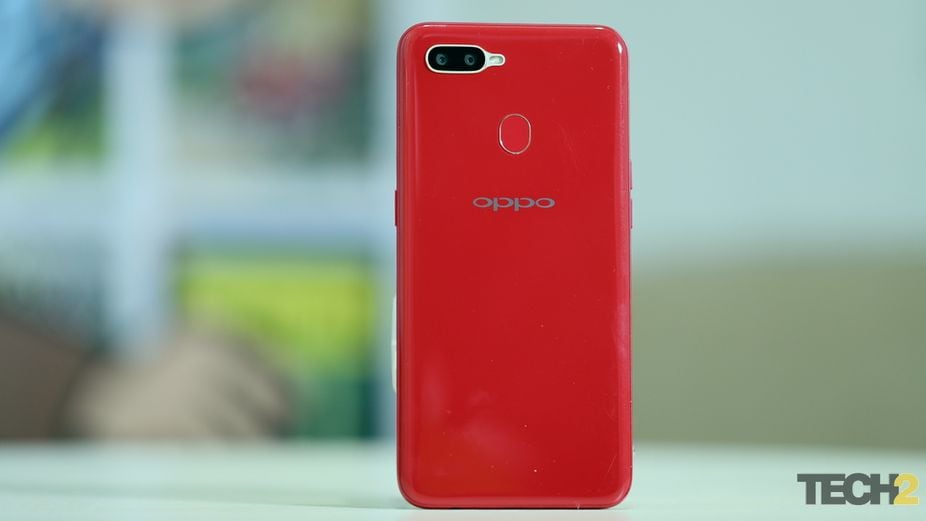 Oppo could have taken a leaf out of Xiaomi's book and put in a two-tone colour gradient design.

There is a fingerprint reader with gold accents and a dual-camera setup arranged horizontally, again with golden accents. The plastic back is quite prone to fingerprints and smudges, and to make things worse these are quite hard to wipe.

TheOppo A5s is built quite sturdily and feels light in hand considering its large footprint. On the left side of the phone, we see the volume rocker buttons while on the right we see a power button. The front of the phone has a big display flanked by a drop-notch at the top and a considerable chin at the bottom. The frame of the phone is also made of plastic. 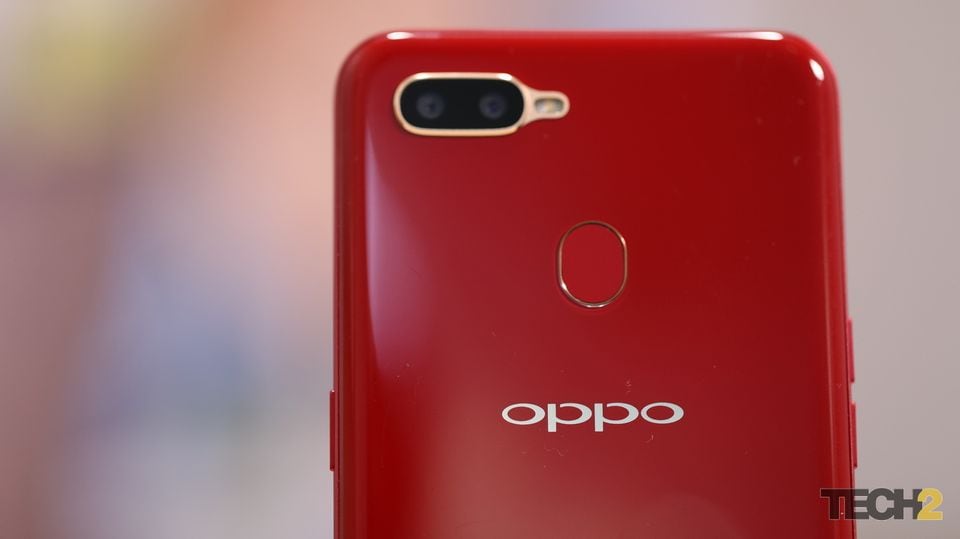 The gold accents on the camera and fingerprint sensor are a nice touch.

Overall, the phone looks quite decent for its price but Redmi has done a great job with a dual-tone gradient finish on the recently launched Redmi Y3, which gives the device a snazzier look.

The phone has a 6.2-inch display with HD+ resolution which seems vibrant and a bit saturated. Not that I had expected too much from an under Rs 10k phone, I was happy to view content on the big and immersive display. When comparing the display to its competitor, Realme 3, I found the Oppo A5s’ display to be a bit better in terms of viewing angles and brightness levels. The waterdrop notch is quite good.

There are no alternative display calibration options on the device but you can change the colour temperature to cooler or warmer. The display panel is covered with Gorilla Glass 3, which is a wee bit disappointing given that the Xiaomi Y3 and the entry-level Xiaomi Redmi 7 offer Gorilla Glass 5 panels on the front. The Oppo A5s additionally offers Night Shield mode which can guard your eyes while reading at night. The display on the Oppo A5s is quite good.

All-in-all the Oppo A5s happens to have a good display for its price point however, there is the added caveat of it being an HD+ display unlike the Redmi Note 7, which also starts at Rs 9,999 and has an FHD+ display. While getting your hands on one was a challenge the phone has gone on an open sale now.

I have reviewed the Oppo F11 Pro and the Realme 3 Pro, both of which come with ColorOS 6.0 based on Android Pie. I said there that ColorOS 6.0 is the biggest upgrade over previous versions as it reduced the bloat and gave a more easy to navigate UI. However, the Oppo A5s comes with the dated ColorOS 5.2 which runs on Android 8.1. 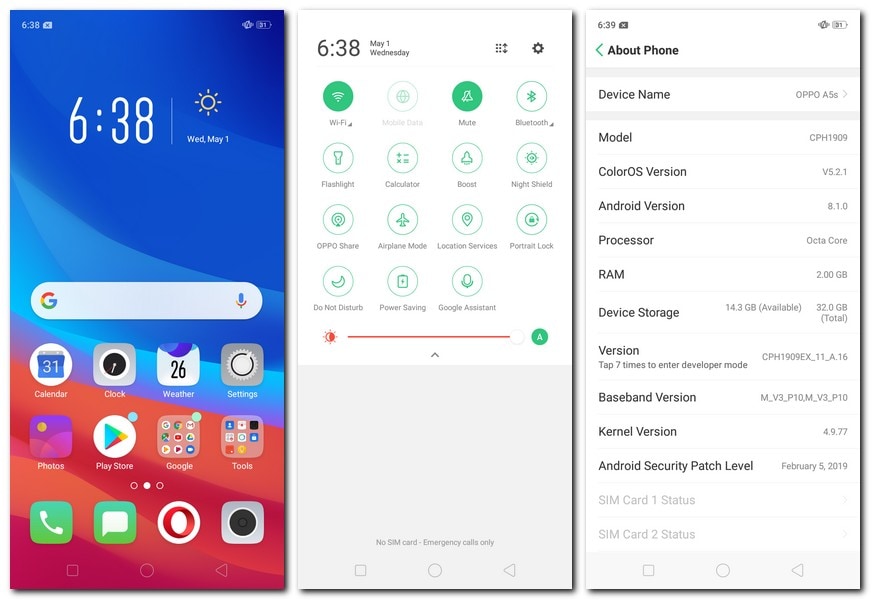 The software experience definitely needs some polish. There is a notification issue which does not remove the notifications with one swipe to the left. Instead one has to do two swipes to remove notifications which is frankly a bit irritating. There is also a lot more bloat such as separate apps for the browser, gallery, and the Oppo App Store. There is also no app drawer, which was always bummer for me. I believe that most of these problems will be resolved once the device gets an upgrade to ColorOS 6.0.

The Oppo A5s has a 13 MP primary sensor with an f/2.2 aperture and also a secondary depth sensor with a 2 MP resolution and f/2.4 aperture. The pictures taken by the camera are better than what I was expecting. The colours are a bit saturated but give the photo a more vivid look. There's less barrel distortion as well when compared to the photos shot on a Realme 3. Exposure also appears to be fine even in areas of extreme sunlight. The dynamic range on the shots were as good as can be expected for the price. The dual-cameras on the Oppo A5s were decent.

However, I found that the Realme 3 took sharper, crisp and detailed images than that A5s. The focus seems to be an issue for the A5s, which consequently produces softer images. Photos shot in low or dim light are also an area that needs work. There appears to be very little focus on the subject in dark conditions, along with a lot of noise. There is also no dedicated night mode present in the camera options such as Nightscape on the Realme 3. 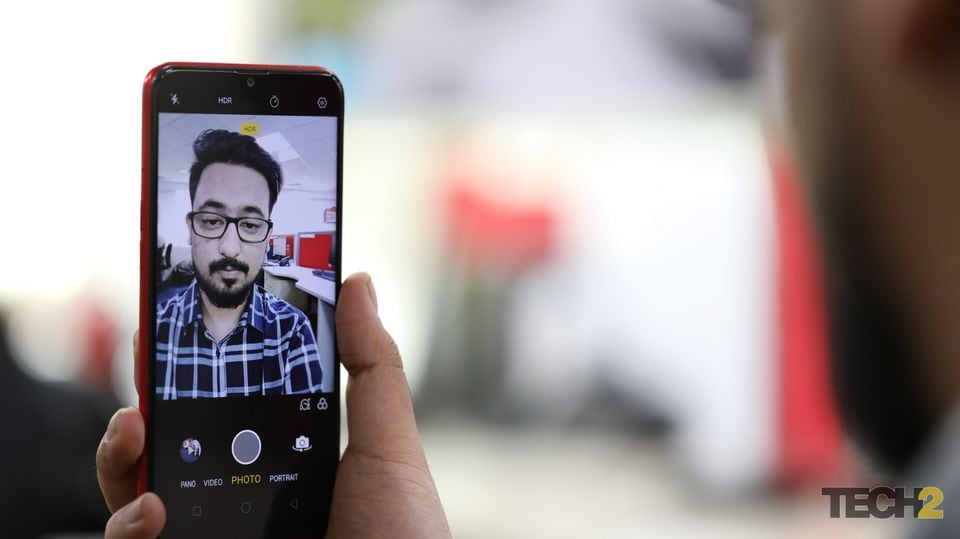 The 8 MP selfie camera was not that impressive.

Selfie performance of the device also does not appear to be at par at what you see on the Realme 3. While overall the 8 MP front camera clicks decent enough pictures, you can definitely see a lot of skin smoothing happening even when the beauty feature is turned off. In general, the images lack detail and the portrait mode on the front facing camera is a mess when compared to the Realme 3.

The video shooting capabilities of the phone are decent enough with the device shooting 1080p videos @ 30 fps.

For high-res images from the Oppo A5s clicke here or check the Flickr album below. Falls a bit short on performance

The MediaTek Helio P35 chipset on the Oppo A5s is not the fastest out there and the Realme 3 again packs in a better chipset in the form of the Helio P70, which is MediaTek’s flagship medium range chipset. Benchmark results also showed pretty poor scores as compared to the Realme 3.

The fact that the base variant, which I’m reviewing, comes with only 2 GB of RAM and 32 GB of internal storage doesn’t help the phone. Again the Realme 3 offers better value for money by offering 3 GB RAM + 64 GB storage in its base variant which is priced at Rs 9,999.

Opening light apps and switching between them was easy, but as soon as I switched to heavier apps like Facebook and Instagram, there was a significant lag in app switching. This was again not the case with the Realme 3. 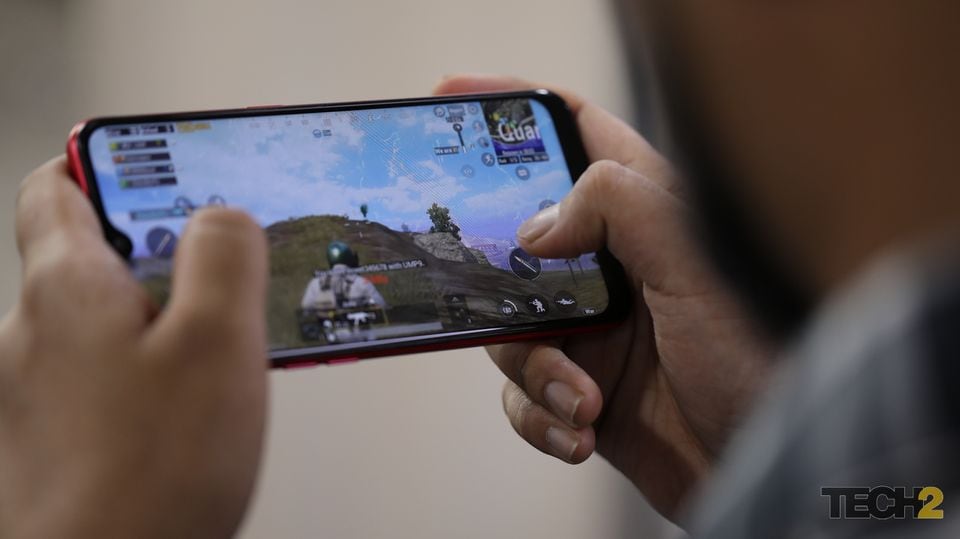 PUBG ran on low settings with frame stutters after about 30 minutes of playing.

PUBG Mobile ran on low-settings and was generally playable with occasional frame drop after playing for more than 20-30 minutes. Smaller gaming apps like Subway Surfer and Temple Run ran without a hiccup. Audio quality and speaker quality was nothing exceptional, which was again to be expected given the price point. Call quality worked as expected. The fingerprint reader on the device was fast and responsive but I couldn’t say that for the face unlock, which at times took an eternity to unlock the screen.

The battery on the Oppo A5s is one of the phone's stronger points. The device packs in a  4,230 mAh battery that combined with the MediaTek processor and HD+ display makes for significant battery savings. However, the Realme 3 also packs in a 4,230 mAh battery and in our review, we found out that it too had great battery life. Oppo and Realme’s ColorOS UI has always been a barrier for my standard PC Mark Battery test and it also does not provide battery usage statistics. In general, the phone ran for the entire workday with at least 25-30 percent juice remaining by the end of the day.

My daily usage consists of a full-time operational Slack account along with constant access to WhatsApp, Instagram, Facebook and YouTube. If one decides to put in PUBG usage in it as well, then the phone lasts for about half a day with gaming time ranging in the 2-3 hour mark. There is no fast charging present in the box so the device takes about 2 hours to go from a dead phone to 100 percent.

It appears to me that the once sub-brand of Oppo, Realme has completely derailed it’s parent company’s ambitions in the budget smartphone space. The Oppo A5s is a great phone but don't buy it.

There is little that the Oppo A5s does better than the Realme 3 except for having a slightly brighter display even though both of them are priced exactly the same.

If my colleague’s Redmi Y3 review (also priced at Rs 9,999) is anything to go by, then the A5s falls short by quite a margin which makes it hard to recommend. The Redmi Note 7 also offers a better chipset (Snapdragon 660) and a beautiful design at Rs 9,999. Oppo really needs to pull up its socks given how cutthroat the budget smartphone segment has become these days.

Redmi Y2, Redmi 6 and Redmi 6A to no longer receive an upgrade to Android Pie

Xiaomi Mi Fan Sale kicks off on Amazon with offers on Mi A2, Redmi Note 5 Pro and more